So why are so many MSP executives smiling? What do they know that the industry pundits appear to be missing? Maybe it’s that old adage that times of turmoil are also times of opportunity. The opportunity that’s knocking loudly and clearly for MSPs is the cloud. A number of forward-thinking MSPs have put the reins in their teeth and are charging full-steam ahead into a cloudy future.

Two factors in particular work in the favor of a rosy outlook for MSPs. First, their customers see cloud computing as their future, but they are uncertain about how to realize cloud benefits while avoiding the technology’s pitfalls. Second, MSPs have already gained the trust of their customers, so they’re in a great position to guide them as they transition to the cloud model.

The only prerequisite for MSPs to capitalize on the changing marketplace is that they embrace cloud services and abandon the revenue models that proved so profitable in the past. Unfortunately, MSPs aren’t necessarily noted for their agility, and for many, the old ways die hard. What’s likely to shake the laggards out of their lethargy is the realization that their customers are going to the cloud, with them or without them.

Giving Customers What They Want

For decades, IT has operated as a closed shop, generally speaking. Most of the hardware and software that keeps the organization running smoothly toward its goals is on the premises and managed by in-house staff. Slowly at first, and then in a rush, the in-house model evaporated. Companies no longer own the servers their data is stored on and their applications run on. Often they don’t even develop or own the apps themselves.

IT’s relationships with its customers are evolving from direct provider of services to a broker for myriad services offered by third parties. In effect, IT becomes a kind of MSP for the organization. Rather than squeezing out existing MSPs, the change opens new areas for MSPs to serve businesses of all sizes. As Business2Community’s Purl puts it, MSPs have to start “selling sticky.”

Purl claims that cloud services make it easier than ever to expand beyond the “break-fix” approach to service provision to establish a relationship that is both long-lasting and mutually beneficial.

Maybe it’s their generally positive outlook on life, but MSPs see a bright future for their industry despite a growing number of their customers choosing to buy services directly from cloud vendors. 451 Research’s report entitled “2016 Trends in Service Providers” (pdf) found that most money spent on cloud services this year will be paid to channel partners rather than directly to service providers. The survey also identified a promising opportunity for MSPs to assist their corporate customers transition their networks to hybrid clouds. 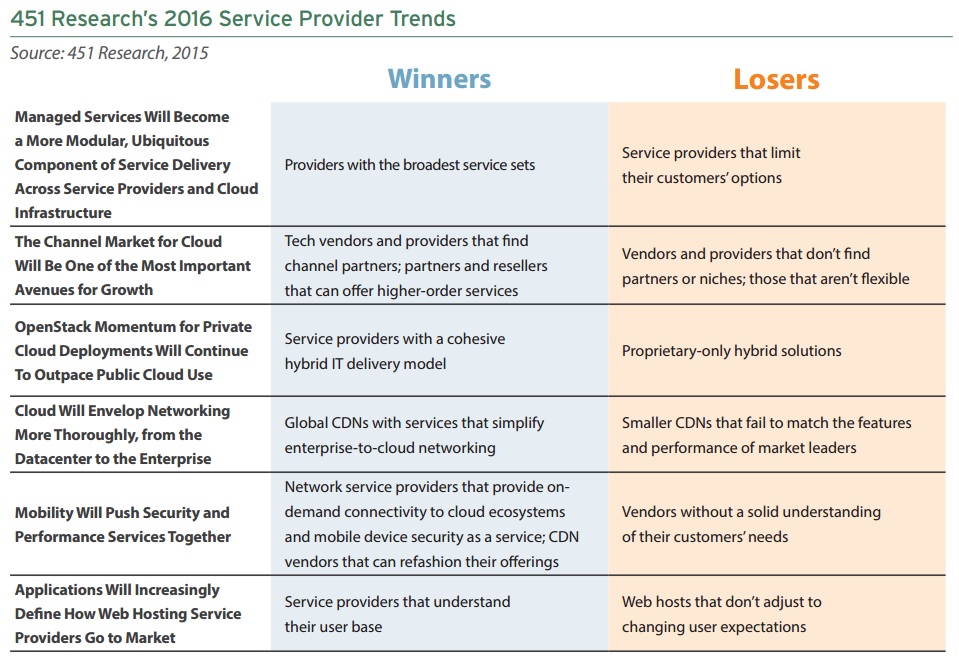 The characteristics that will separate the successful MSPs from the also-rans, according to 451 Research’s 2016 survey.

According to 451 Research, a principal challenge for MSPs is to sort out a marketplace in which “the traditional, clearly divisible market segments that make up the hosting world are rapidly collapsing into each other and boundaries are being erased between operationally distinct types of hosting businesses.” Customer workloads are shifting from traditional shared, virtualized, and dedicated infrastructure to specialized environments. New service providers appear to have a leg up on their longer-tenured counterparts in offering the specialty products that are increasingly in demand.

Considering how dependent so many MSPs are on providing hardware to their customers, the switch to pure software and service offerings will leave some providers in the dust. Not many MSPs look forward to competing directly with the likes of Amazon, Google, and Microsoft, as the Wall Street Journal’s Angus Loten writes in a June 30, 2016, article. At the same time, MSPs’ customers are now more comfortable with relying on cloud infrastructure and applications.

According to figures compiled by research firm MarketsandMarkets, the worldwide MSP market is forecast to grow by 12.5 percent annually, from $107 billion in 2014 to $193 billion in 2019. Yet gross profit margins for MSPs are expected to decline from the 60 percent level of recent years to only 30 percent, according to research by 2112 Group. There’s no way MSPs can sustain such profit levels simply by reselling existing cloud services. 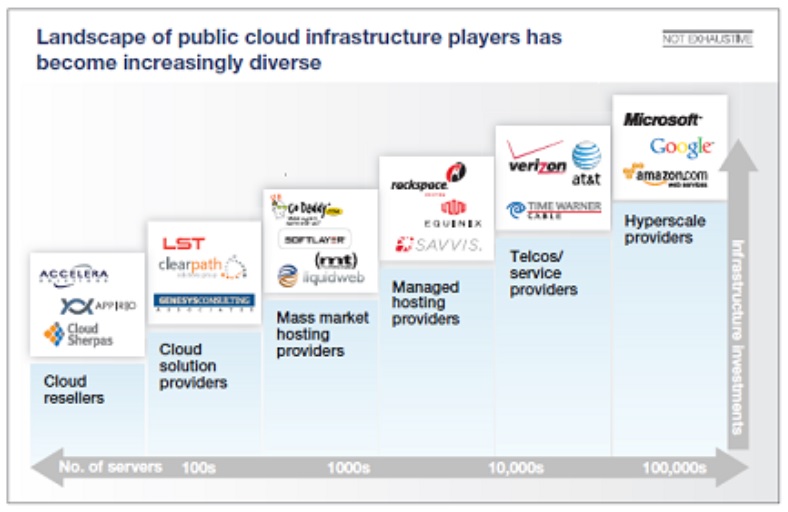 The public cloud has expanded and diversified to accommodate every size and type of business. Source: Ephor Group

Instead, MSPs must embrace new roles, particularly by offering to serve as an “orchestrator” of the various cloud services their customers are using, according to CompTIA senior director of industry analysis Carolyn April. MSPs’ search for new revenue models will likely lead them to advise their customers via a “selection and vetting process” for cloud services, according to April.

Before contracting for any cloud service, whether from a third party or directly from the provider, you have to verify the security of your organization’s data assets. In an August 4, 2016, article in Computerworld, Paul Desmond lists the four keys to security in managed-services environments. The first is to gather as much information about the service’s security measures as possible. This means asking a lot of questions:

• Where are your facilities located?

• If they’re offshore, what security guarantees do you offer?

• How do you manage change control and documentation?

• How frequently do you update your security?

The second of the four keys is to verify compliance with applicable security standards. The best way to do that is to conduct an onsite audit and discussions with the administrators who secure the data systems. Thirdly, if the data is stored offshore, ensure the privacy regulations for that region are followed. The last of the four keys is to confirm identity and access management controls are in place.