I’m continuing my theme of management from my January blog (“It takes an engineer to manage engineering”), and we need to clear up some terminology.

I often hear form people at Agile conferences that we should get rid of managers but they offer up no definition of "manager". Let me suggest that the title “manager” is thrown around quite lightly these days, its probably just title inflation but it causes a lot of confusion. When people say “get rid of managers” I think they are usually referring to “people managers” specifically “managers” who take on positions of authority over others.

The problem is an awful lot of “managers” aren’t managers in this sense. Putting the word “manager” into a job title has a habit of making it ill defined. The same is true in code, a “SecurityManager” class or “LogManager” tend to be a dumping ground for all sorts of vaguely related functionality. Those who truly manager often find their job is a lot of vaguely related bits and pieces, thats the nature of managing.

But the title a lot of the people we call “manager” could more accurately be called “Specialist”. So you might have a “Product Specialist” or a “Release Specialists”

We have Product Managers — they don’t manage people they “manage” products. That means they talk to customers, analyse the market and, after some magic, decide what to build into a product. Its become a bit of a catch-all role. These people could better be called “Product Specialist” or still “Product Analyst.”

The same goes for “Release Managers” who don’t manage people, they administer release processes and do release engineering. They might be better titled “Release Specialists”, “Release Engineer” or “Release Administrator.”

Then there is that vague role of “Iteration Manager” I know they don’t manage people and frankly I don’t know what they do. The role only seems to exist at ThoughtWorks and former clients of ThoughtWorks but I bet it could be better called “Iteration Specialist” or “Iteration Administrator.”

To put this graphically: we can think of the set of all the people called “manager”, of these a significant portion aren’t really managers, they just use the title “manager.” 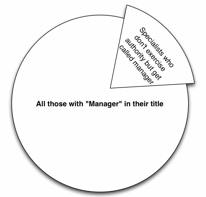 Correctly naming these roles would help. Alternatively it might also help to abolish title altogether. I’m told that at the old AT&T Bell Labs everyone had the title “Member of Technical Staff.”

A harmonizing title — “Team Member” or “Engineer” — appeals to me, it would break down some of the demarcation lines which inhibit people from doing what needs doing.

However, people like job titles because titles form part of their identity, it describes how they see themselves and adding “Manager” to the title makes it sound more important, ones career has advanced when one has “Manager” in the job title!

(I’ve blogged about identity before, in the dim and distant past, but the two entries stand up “Who are you? — identity and change” and “The Dog and Duck is closing”).

Titles help people mark out the area they work in and the tools they bring to the job. It indicates who they associate with. However it sometimes seems that people are more concerned about proving that people in their role can save the day (another old blog “What you need is a…”).

So in summary… it is complicated, the title “Manager” does not mean someone manages anyone, anything or has any authority. Once again, look beyond the label.

Are Managers Really as Horrible as We Think They Are?

7 Leadership Lessons From a First-Time Manager