Join For Free
I know what you’re thinking: “You are already sensitive to various orientations, how can you make my Windows Phone application the same?” Lucky you! Microsoft has written a whole API (a kind of radar, if you will)  to sense Phone orientation.

Left? Right? Up? Down? Your application determines what is supported. Windows Phone supports multiple sensors providing information about the device’s orientation and location, including Compass, Gyroscope, and Accelerometer.

The Accelerometer tells your application if the user is tilting the phone and how much. Just reference Microsoft.Devices.Sensors and Microsoft.Xna.Framework.

Now, there are these few limitations to remember:

The Accelerometer simply requires you to instantiate it and start it. Let’s build a sample together. I will create a Rectangle and we’ll move it around the screen according to the Accelerometer. I will do it all in code-behind. Check this out: 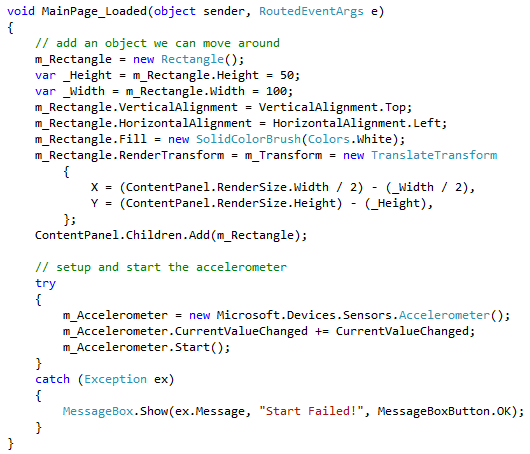 Get the code here.

In the code above, see the TranslateTransform? This is the easiest way to move anything – simpler than using Canvas.Top/Left, Margin, or anything else. Also, the CurrentValueChanged event tells us when the UI should be updated. We’ll handle it like this: 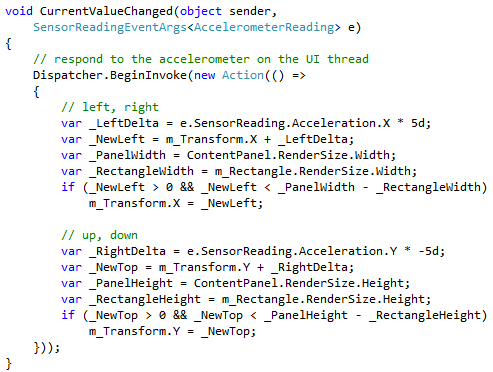 When the X and the Y are reported by the Accelerometer, the value a positive (left) or negative (right) double value (between –1 and 0 and 1). The values represents the degree of tilt. This is easy to add the existing TranslateTransform X or Y. A multiple (like 5) moves faster.

Windows Phone includes the Combined Motion API. The Motion class handles the low-level sensor calculation and allows applications to easily obtain the device’s attitude (yaw, pitch, and roll), rotational acceleration, and linear acceleration both due to gravity and user movement.

Note: it’s worth noting, for what it is worth, that the Combined Motion API is the recommended API for Accelerometer data. You should prefer it for your application.