the content of this article was originally written by tony hirst over on the ouseful.info blog.

following on from mapping how programming languages influenced each other according to wikipedia , where i tried to generalise the approach described in visualising related entries in wikipedia using gephi for grabbing datasets in wikipedia related to declared influences between items within particular subject areas, here’s another way of grabbing data from wikipedia/dbpedia that we can visualise as similarity neighbourhoods /maps (following @danbri: everything still looks like a graph (but graphs look like maps) ).

in this case, the technique relies on identifying items that are associated with several different values for the same sort of classification-type. so for example, in the world of music, a band may be associated with one or more musical genres . if a particular band is associated with the genres electronic music , new wave music and ambient music , we might construct a graph by drawing lines/edges between nodes representing each of those musical genres. that is, if we let nodes represent genre, we might draw edges between two nodes show that a particular band has been labelled as falling within each of those two genres.

so for example, here’s a sketch of genres that are associated with at least some of the bands that have also been labelled as “psychedelic” on wikipedia: 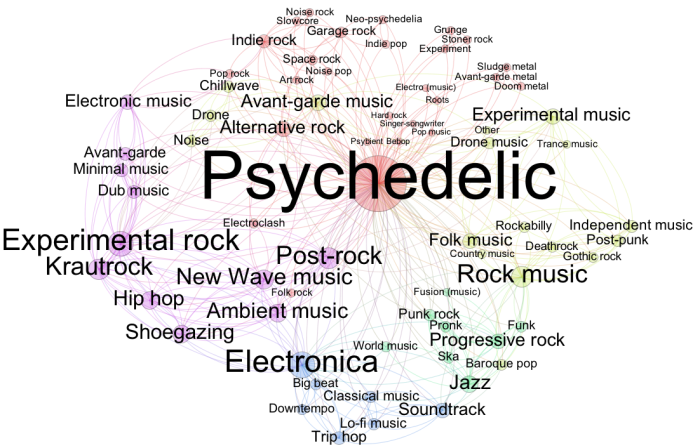 following the recipe described here , i used this request within the gephi semantic web import module to grab the data:

(i made up the relation type to describe the edge…;-)

this query searches for things that fall into the declared genre, and then checks that they are also a group_or_band . note that this approach was discovered through idle browsing of the properties of several bands. instead of:
?band <http://dbpedia.org/property/background> "group_or_band"@en.
i should maybe have used a more strongly semantically defined relation such as:
?band a >http://schema.org/musicgroup>.
or:
?band a <http://dbpedia.org/ontology/band>.

(the offset parameter allows you to page between results; so an offset of 10 will display results starting with the 11th(?) result.) 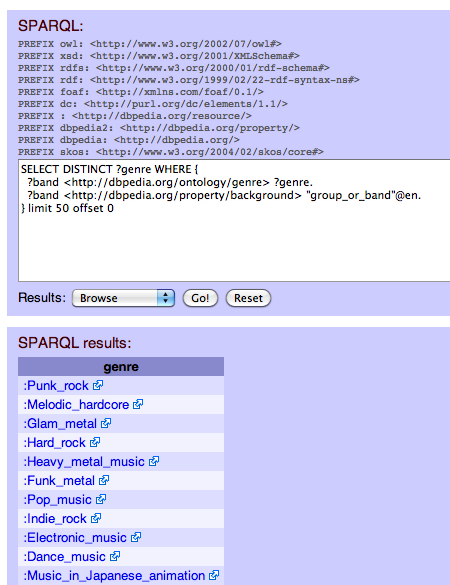 what this query does is look for items that are declared as a type group_or_band and then pull out the genres associated with each band.

if you take a deep breath, you’ll hopefully see how this recipe can be used to help probe similar “co-attributes” of things in dbpedia/wikipeda, if you can work out how to narrow down your search to find them… (my starting point is to browse dppedia pages of things that might have properties i’m interested in. so for example, when searching for hooks into music related data, we might have a peak at the dbpedia page for hawkwind (who aren’t, apparently, of the psychedelic genre…), and then hunt for likely relations to try out in a sample snorql query…)

ps if you pick up on this recipe and come up with any interesting maps over particular bits of dbpedia, please post a link in the comments below:-)