from my calcs (googlers please correct me), there’s one commit to the trunk every 30 seconds, and their proprietary ci infrastructure keeps up with that on a per-commit basis. that’s a different story.

a monorepo is where two or more teams with different deployable/shippable applications and/or services (and potentially different release cadences/schedules) exist in the same repo/branch. ‘the trunk’ of trunk based development specifically.

those checkouts could get big, right?

(martin fowler will give this a better name, hopefully).

the checkout to the developer’s workstation expands or contract to the smallest amount of buildable/linkable modules needed to perform test and package operations. not only that but in a 100% provable way from a deep understanding of the directed graph of buildable things and the things that could use them.

at some level, ex-googler ex-facebooker buck-committer, simon stewart points out, this expand/contract thing is just a view or projection of a monorepo. he says:

“the amount of boilerplate required to get the maven thing working is terrifying. both buck and blaze let you just create a new directory, shovel classes into it, and you’re done. the “src” nonsense required to make mvn work without hoop jumping seriously raises the bar to multiple modules.”

he is right of course, but maven is still the enterprise gorilla.

maven is a recursive build technology that forward declares child modules to build. compare that to google’s blaze (partially open sourced as bazel) and facebook’s buck which are directed graph build systems where there are no forward declarations. it is no co-incidence that expanding/contracting checkouts are easy with them, because that was the design goal blaze (the one that came first).


all those are directories within the current directory. maven is going to take some coercing .

ant and gradle are the same, but i’ll focus on the java enterprise gorilla — maven.

i took google’s guava because it had a multi-module build that, although small, could be a surrogate for something with hundreds of modules, which could represent a company’s entire set of (java) deployable/shippable applications and/or services.

the default checkout of this repo doesn’t build as all the pom.xml files were renamed pom-template.xml

no matter, run this:

run this on the command line:


this gives a dot graph (graphviz) that, via some colorization in omnigraffle, looks like: 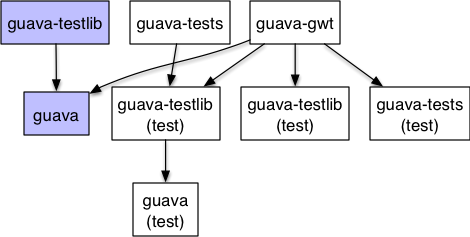 i’ve colored in two items above. wouldn’t it be nice to modify the checkout (working copy) to have just those two modules, and maven not choke because of missing modules?

well, that’s possible now. do this:


as promised, mvn install works on just two modules now, rather than the eight before. the dependency graph looks like this:

a word of warning

for the love of turing, have a lock-step version number for everything built in the monorepo. maybe maven’s classic 1.0-snapshot suffices, and in your cd-esque deployment technologies, you designate something more meaningful in jenkins (etc).

that’s easy, some more python fu, that works with the first dot graph to allow you to conveniently modify .git/info/sparse-checkout . like so:

well, i haven’t convinced anyone bar googlers and xooglers. no matter, i’m looking forward to having git or mercurial push their size boundaries to get to the place perforce, subversion, and plasticscm can so that companies can bank on monorepo setups.

while i have your attention

can i direct your attention to a portal documenting ‘trunk based development’ (including monorepos)? -> https://trunkbaseddevelopment.com

no ads, no services being sold, and mobile friendly. well worth a look, in my opinion.