For the CPU-bound load, I will use a sysbench OLTP read-only workload with data fitting into memory (so there is no IO performed, and the execution path only goes through the network and CPU).

First, I measured the throughput on a bare server, without containers – this will be the baseline. For reference, the command I used is the following:

On the bare metal system, the throughput is 7100 transactions per second (tps).

In the next experiment, I started Percona Server in a Docker container and connect to it from the host:

In this case, the container exposed port 3306 to the host, and we used that as an access point in sysbench.

The throughput in this scenario is 2200 tps!!! That is a significant overhead. I suspect it comes from the Docker gateway, which is added to the execution path when we connect through port forwarding.

So to avoid the Docker gateway, in the next run I used the host network by running the container with--net=host:

From these tests, I can make an important conclusion. There is NO measurable CPU overhead when running Percona Server in a Docker container. But the network path raises some questions.

So in the next experiment, I ran both sysbench and MySQL in two different containers, connected over the Docker network bridge.

I created a sysbench container, which you can get from https://hub.docker.com/r/percona/sysbench/.

Just for the reference, I created a Docker network:

and connected both containers to the same network:

In this configuration, the throughput I’ve observed is 6300 tps.

So there is still some network overhead, but not as significant as with the port gateway case.

For the last example, I again excluded the network path and ran the sysbench container inside the MySQL container network stack using the following command:

The throughput in this configuration is back to 7100 tps.

The following chart summarizes the results: 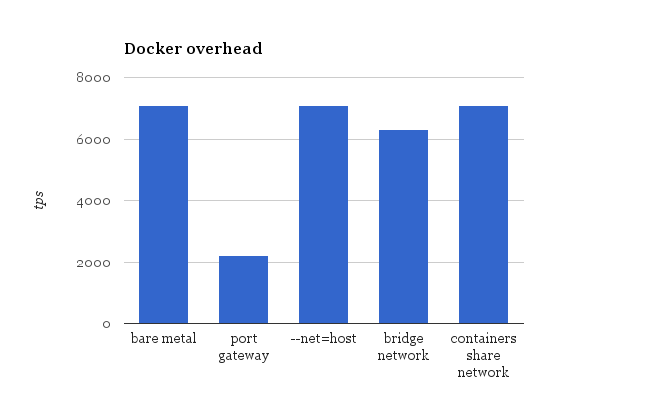 Next time I will try to measure IO overhead in Docker containers.