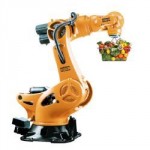 Robotics is an increasingly sophisticated part of the modern manufacturing process.  Researchers at the University of Lincoln believe that their new machine is sufficiently groundbreaking to herald a sizeable shift in how food is manufactured.

The machine, called the Automated Processing Robotic Ingredient Loading (APRIL), is branded by the researchers as a robotic chef and offers an automated system that can mix, load and cook ingredients in a manner similar to that of professional chefs (albeit on an industrial scale).

Progress has been made in this field before, with a DARPA competition last year highlighting how robots are capable of learning relatively complex kitchen based manoeuvres based upon simply watching YouTube clips of the actions required.

APRIL puts this, and more, into action.  She was released to the public at a launch event on the 28th April, where the developers outlined how robotics will change the industry.

“The nature of the processing and sheer scale of the APRIL system really sets it apart from other robotic manufacturing processes in the food sector and we are delighted to be working with OAL on this initiative here at the University of Lincoln,” the team say.

The team go on to say that APRIL is unique because she comes much earlier in the manufacturing process.  Most existing robots are deployed at the end, doing things like palletisation and packing the food.  APRIL however is used more at the front end.

“APRIL enables much more control over recipe management and recipe control of liquid food products on an industrial scale,” they say.

“So many food manufacturing set-ups right now are running on technologies that are 20 to 30 years old; a lot of traditional cook-chill, cook-freeze systems. This means that products can be held for long periods of time and often become over-mixed and over-processed. With this new process we are looking to emulate the chef in the kitchen in a large-scale batch robotic environment, which brings with it many labour and product benefits,” they continue.

The team envision the preparation of things such as sauces, soups and ready meals, with the robot consisting of a number of modules and a flexible design that easily allows the system to switch between products.

This flexibility will enable APRIL to adapt to changing market conditions, and thus hopefully prevent it from becoming a white elephant.  You can learn more about it at the website above, or alternatively via the video below.