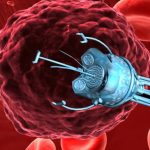 The notion of nanobots entering the body and fixing us from the inside has been an ambition of the science community ever since K. Erik Drexler famously popularized the notion in Engines of Creation back in 1986.  For much of the intervening years, the concept has stayed firmly in the realm of science fiction, but there are signs that this may be about to change.

A recent paper published by researchers from McGill, Polytechnique Montréal, Université de Montréal looked at how nanorobots could be used to help fight cancer.

While Drexler was advocating molecular engineering, the approach used in the paper is slightly less sexy, albeit only slightly.  They’re suggesting that nanobots could be inserted into the bloodstream of the patient, from which they can administer a cancer drug with extreme precision.

The team believes that this approach would enable medicine to be applied to cancerous cells, and thus both increases the likelihood of success while also reducing the risk to other organs and healthy tissue surrounding the tumor.

As a result of this level of targeting, a smaller amount of medicine can be used, all of which sounds like a win-win all round.

“These legions of nanorobotic agents were actually composed of more than 100 million flagellated bacteria — and therefore self-propelled — and loaded with drugs that moved by taking the most direct path between the drug’s injection point and the area of the body to cure,” the team says. “The drug’s propelling force was enough to travel efficiently and enter deep inside the tumors.”

When the nanobots enter the tumor, they’re able to detect the oxygen-depleting areas automatically and deliver the medicine accordingly. The potential of this approach is enormous, as such hypoxic zones are typically resistant to traditional approaches, such as radiotherapy.

The bots navigate the body using a couple of natural systems.  Firstly, a ‘compass’ was developed via the synthesis of a chain of magnetic particles. This allows the bots to move in the same direction as the magnetic field.  A sensor is then used to measure the oxygen levels. These two systems allow the bot to find it’s way to the active regions in the tumor.

“This innovative use of nanotransporters will have an impact not only on creating more advanced engineering concepts and original intervention methods, but it also throws the door wide open to the synthesis of new vehicles for therapeutic, imaging and diagnostic agents,” the team concluded. “Chemotherapy, which is so toxic for the entire human body, could make use of these natural nanorobots to move drugs directly to the targeted area, eliminating the harmful side effects while also boosting its therapeutic effectiveness.”

Suffice to say, we’re not at a stage where this will be rolled out as a treatment yet, but it’s an exciting glimpse into just what might be possible in a few years time.

BroodMinder Is Saving Bee Colonies Through the IoT