Join For Free
In-memory processing has been a pretty hot topic lately. Many companies that historically would not have considered using in-memory technology because it was cost prohibitive are now changing their core systems’ architectures to take advantage of the low-latency transaction processing that in-memory technology offers.  This is a consequence of the fact that the price of RAM is dropping significantly and rapidly and as a result, it has become economical to load the entire operational dataset into memory with performance improvements of over 1000x faster. In-Memory Compute and Data Grids provide the core capabilities of an  in-memory architecture.

The goal of In-Memory Data Grids (IMDG) is to provide extremely high availability of data by keeping it in memory and in highly distributed (i.e. parallelized) fashion. By loading Terabytes of data into memory IMDGs are able to work with most of the Big Data processing requirements today.

At a very high level IMDG is a distributed object store similar in interface to a typical concurrent hash map. You store objects with keys. Unlike traditional systems where keys and values are often limited to byte arrays or strings – with IMDGs you can use any domain object as either value or key. This gives tremendous flexibility by allowing to keep exactly the same object your business logic is dealing with in the Data Grid without the extra step of marshaling and de-marshaling alternative technologies would require. It also simplifies the usage of data grid as you can in most cases interface with distributed data store as with a simple hash map. Being able to work with domain objects directly is one of the main differences between IMDGs and In-Memory Databases (IMDB). With the latter, users still need to perform Object-To-Relational Mapping which typically adds significant performance overhead.

There are also some other features in IMDGs that distinguish them from other products, such as NoSql databases, IMDBs,  or NewSql databases. One of the main differences would be truly scalable Data Partitioning across cluster. Essentially IMDGs in their purest form can be viewed as distributed hash maps with every key cached on a particular cluster node - the bigger the cluster, the more data you can cache. The trick to this architecture is to make sure that you collocate your processing with the cluster nodes where data is cached to make sure that all cache operations become local and that there is no (or minimal) data movement within the cluster. In fact, when using well designed IMDGs, there should be absolutely no data movement on stable topologies - the only time when some of the data is moved is when new nodes join in or some existing nodes leave, hence causing some data repartitioning within the cluster.

The picture below shows a classic IMDG with a key set of {k1, k2, k3} where each key belongs to a different node. The external database component is optional. If present, then IMDGs will usually automatically read data from the database or write data to it. 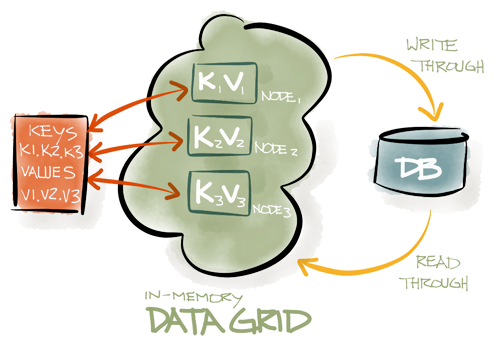 Data consistency is one of the main differences between IMDGs and NoSQL databases. NoSQL databases are usually designed on top of Eventual Consistency (EC) approach where data is allowed to be inconsistent for a period of time as long as it will become consistent *eventually*. Generally, the writes on EC-based systems are somewhat fast, but reads are slow (or to be more precise, as fast as writes are). Latest IMDGs with an *optimized* 2PC should at least match if not outperform EC-based systems on writes, and be significantly faster on reads. It is interesting to note that the industry has made a full circle moving from  a then-slow 2PC approach to the EC approach, and now from EC to an *optimized* 2PC which often is significantly faster.

Different products provide different 2PC optimizations, but generally the purpose of all optimizations is to increase concurrency, minimize network overhead, and reduce the number of locks a transaction requires to complete. As an example, Google's distributed global database, Spanner, is based on a transactional 2PC approach simply because 2PC provided a faster and more straightforward way to guarantee data consistency and high throughput compared to MapReduce or EC.

Even though IMDGs usually share some common basic functionality, there are many features and implementation details that are different between vendors. When evaluating an IMDG product pay attention to eviction policies, (pre)loading techniques, concurrent repartitioning, memory overhead, etc... Also pay attention to the ability to query data at runtime. Some IMDGs, such as GridGain for example, allow users to query in-memory data using standard SQL, including support for distributed joins, which is pretty rare.

The typical use for IMDGs is to partition data across the cluster and then send collocated computations to the nodes where the data is. Since computations are usually part of Compute Grids and have to be properly deployed, load-balanced, failed-over, or scheduled, the integration between Compute Grids and IMDGs is very important. It is especially beneficial if both In-Memory Compute and Data Grids are part of the same product and utlize the same APIs which removes the need of integration and usually renders utmost performant and reliable systems. 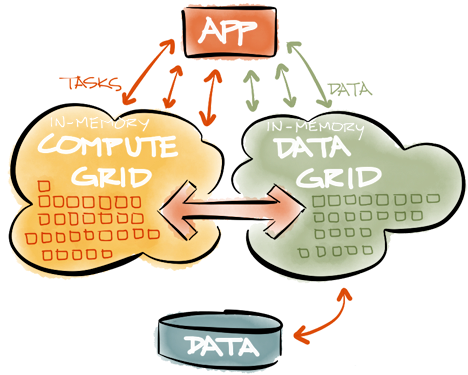