The Architectural Elements in Distributed Systems 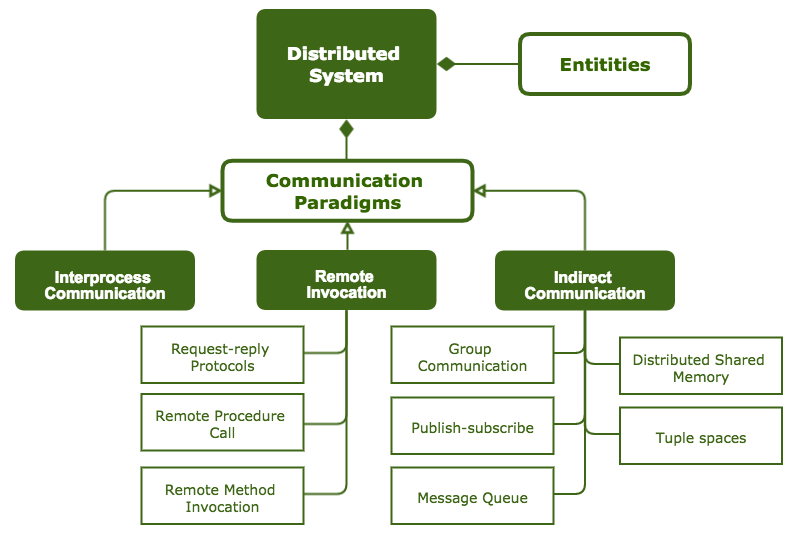 There are four main techniques in indirect communication paradigm. All these techniques provide space and time uncoupling for distributed entities via some intermediary service component. 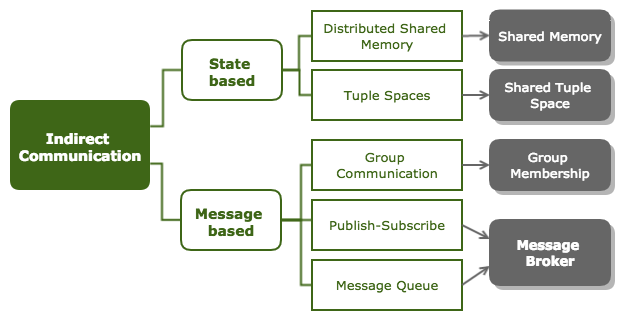 Distributed/communication entities in both publish-subscribe and message queue models have two primary roles in common: message sender/publisher and message receiver/subscriber. Also, both has a similar challenge of reliable message delivery. The similar requirements for a message oriented intermediary service has resulted emerge of message broker systems as a separate service component.

Most of the traditional message brokers such as ActiveMQ, RabbitMQ, and WebSpehereMQ adhere to one or more messaging protocols/specifications to improve their interoperability. But Kafka follows an unconventional design approach that more focus on efficiency and scalability of the system with basic messaging features.

Kafka avoids the overhead of maintaining external message id for message locations. Instead, messages are addressed with its logical offset in the message log. The request from message consumers always contains the offest of the message that consumption should start.

The comparison takes the main measurement the message latency, the time taken for a message to get from producer to consumer in different message broker systems. The message latency is compared against message sizes and batch sizes.

Testbed for the Comparison

A simple testbed was designed and implemented for collecting the latency measurements for different test scenarios. The source code for the testbed can be found here.

To collect fair measurements, the testbed is set up on AWS cloud environment, which has greater control and flexibility in arranging resources. Each consumer, producer, and message broker components are setup on its own AWS EC2 instances, but in different availability zones. EC2 instances are created from Amazon Linux AMI with instance type t2.micro.

AWS Linux AMI ensures Network Time Protocol (NTP) are configured for all EC2 instances and clocks are in sync. This is an important factor for the message latency measurement. The following figure shows the execution environment setup for test scenarios: 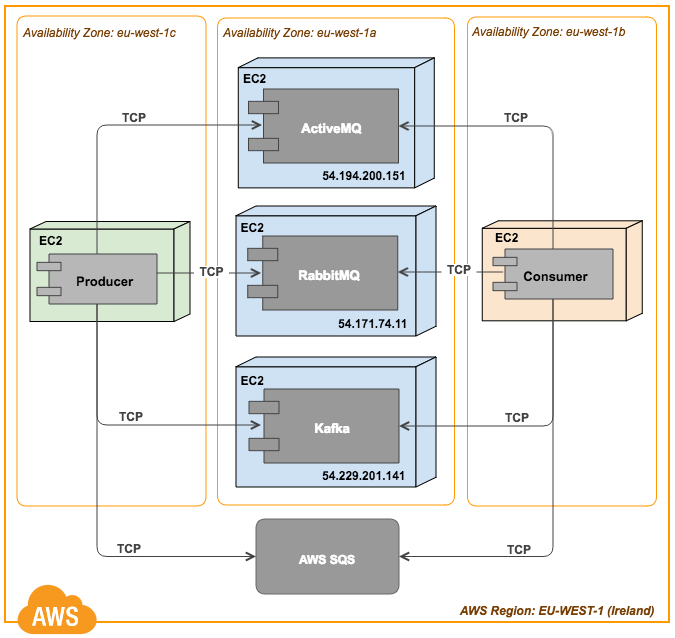 Three main test cases were considered based on message size and message load. In the first test case, 250 messages in 25 batches are generated at the producer and send to the message broker. This was carried out for messages with size, 32 Bytes, 128 Bytes, 1KB, 4KB, 16KB, 64KB, and 256KB. Each message was piggyback with the timestamp when it was sent. The consumer continuously listens on the message broker and calculated the time difference (latency) when the message was received at the consumer. The latency was calculated for each message and recorded for the data analysis.

As it depicts in the following figure, ActiveMQ, RabbitMQ and Kafka show a clear trend that latency gets increased over message size. AWS SQS does not show such a clear trend. The latency range in SQS is high compared to other systems for each message size. RabbitMQ shows a lower latency compare to Kafka. 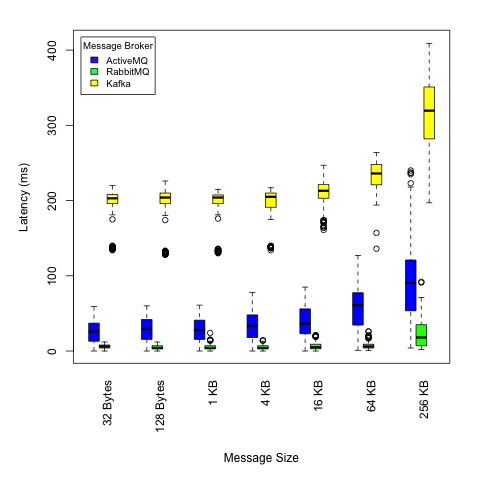 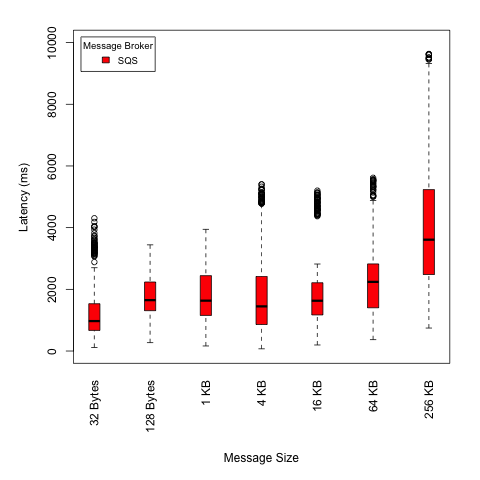 In this test scenario, 32 bytes fixed size messages were generated while increasing the batch size sending a total of 2,400 messages. (Note: AWS SQS was not considered in this test scenario as it showed clear high latency from previous test case). The following figure shows the result of the test scenario. It is clearly seen, Kafka tends to perform well compare to others on high message load. 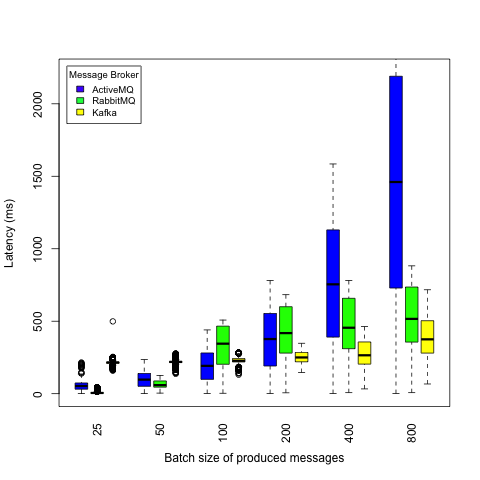 The figure below shows the CPU usage of each Message broker system, while producers continuously generating 1KB messages in 100 batches, and consumer continuously retrieving messages from the broker. The test case carried out simultaneously on all message brokers. The result shows Kafka still uses low CPU usage while providing better message latency compare to ActiveMQ and RabbitMQ.

The message brokers provide an architecturally simple and yet scalable solution among other indirect communication approaches. The performance comparison of these message broker systems show that traditional approaches like RabbitMQ outperform modern systems like Kafka and SQS but in low message load. Kafka tends to perform well when increasing the message load. The CPU usage result shows that Kafka handles a high throughput of messages still with low CPU usage.