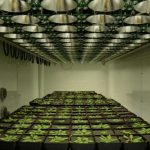 it’s a common sight to see the latest cars whizzing around a test track before heading out into more ‘live’ environments. indeed, a video from stanford university achieved popular acclaim earlier this year. it showed off the university's latest driverless car zooming around a track at 120 mph.

there is perhaps less vivid imagery of similar test environments for plant breeding, but that is exactly what a team from michigan state university have set out to build.

the facility, which is called the dynamic environmental photosynthetic imaging (depi), is designed to provide a test environment for plants in a more natural environment than labs typically provide.

the facility, which was described in a recent paper in cell systems , aims to allow scientists to examine the way real-world conditions affect the growth of plants.

“with depi and all of its specialized equipment, we can make videos of a plants’ living processes,” the team says. “one way to make better plants is to test drive a range of plants with different genes and determine which genes, or combination of genes, make the plant better in different environmental conditions.”

the team believes that their approach will offer a more holistic exploration of the plants' lifecycle. they suggest that traditionally, scientists have focused on subsections such as photosynthesis because this makes it easier to analyze. while this is useful, it does often lead to missed information.

“we now suspect that many, if not most, of the genes in a plant are there to help it cope with environmental changes and perils,” they continue. “and although we know much about the core machinery of photosynthesis, we have very little idea what these other genes do. yet these are the very components that not only keep photosynthesis working efficiently but also keep it from killing the plant.”

the size of the facility also ensures that the science can be done at considerable scale. in total, there are 16 depis at the facility, with each depi capable of monitoring hundreds of plants at once.

the chambers allow scientists to tinker with things such as light intensity or weather conditions to see how the plants respond. they can even simulate potential climate changes. the cameras and sensors in each chamber allow for detailed analysis of the response of the plant to these changes.

the complete array of sensors available provides for a more holistic picture of the plant to emerge, which surpasses the more focused efforts often used by scientists.

“as a result, plants are demonstrating a whole range of new processes, most notably varying behaviors under dynamic environmental conditions, such as when light changes rapidly as it might do on a windy day with partially cloudy skies,” the researchers say. “because these simulated conditions are reproducible in depi and because of our sophisticated monitors, we can study these processes with high precision and in great detail.”