Microservices is a buzz word at the moment. Is it really something original or is it based on established best practices? There are some disadvantages to the way microservices have been implemented, but can these be solved?

Once you have assembled a large system, it can be hard to impossible to profile where the highest delays come from. You can profile for average latency or throughput, but to achieve consistent latencies, you need to analyze key portions of your system. This is where having simple components which run independently can help the consistency of your system end to end.

Mike Gancarz is has summed up these principles:

Make each program do one thing well.

Build a prototype as soon as possible.

Use software leverage to your advantage.

Use shell scripts to increase leverage and portability.

Make every program a filter.

The Microservices Architecture is the UNIX Philosophy applied to distributed systems.

The philosophy of microservices architecture essentially equals the Unix philosophy of "do one thing and do it well." It is described as follows:

There are disadvantages to using a microservices arhictecture some of which are:

Can we get the best features of a monolith and microservices? Does it have to be one or the other? Should we not use the approach which best suits our problem? One of the key aspects of microservices is controlled deployment of an application. So shouldn’t we be able to deploy components as a monolith or microservices where it makes the most sense to do so?

Proposed alternatives to microservices include:

How We Can Get the Best of Both Worlds

If your components are composable, they are always the right size. You can combine them as needed into a collection of services or everything into one service.

This is particularly important for testing and debugging. You need to know a group of components work together without the infrastructure getting in the way. For the purposes of a unit test, you may want to run all your components in one thread and have one directly call the other. This is not more complicated than testing components of a monolith where you can step through your code from one component to another and see exactly what is happening.

Only once your components work together correctly without infrastructure do you need to test how they behave with infrastructure.

Make Your Infrastructure as Fast as Your Application Needs

The keys to achieving low latencies are:

Your L2 cache coherence bus is your messaging layer between high performance services. 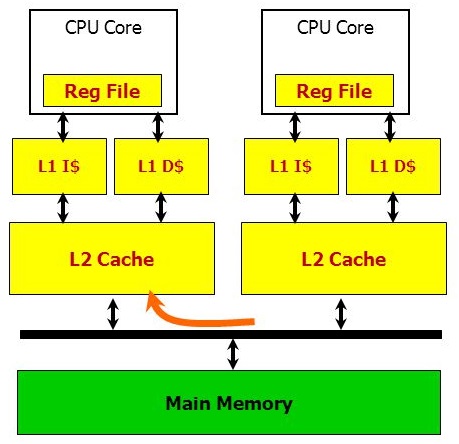 You can perform a CAS operation on the same data between two difference cores, where each thread toggles the value set by the other thread with a round trip time of less than 50 nano-seconds on Sandy Bridge processors, and even less on newer generations.

Examples of low latency instructure in Java are:

These transports have different advantages in terms of handling load balancing and failover.

There are a number of competing concerns in message formats. You want:

Ideally, you can choose the best option at testing/deployment time.

Some examples of serialization libraries where you can change the actual wire format to suit your needs are:

What I found useful in YAML versus JSON is the cleaner syntax, which is designed to be human readable, rather than the subset of another language, the natural support for data types, comments, binary content, and message seperators.

I think there are a lot of good ideas on how to use microservices, and I think many of the criticisms around them are based on how they have been implemented. I believe those problems are solvable.