Update 4/23/2012 7:30 AM PDT: Two members of Microsoft Data Hub/Transfer team reported that they can upload the large test file successfully. Added “Computer/Internet Connection Details” section below. Proceeding with tests to determine maximum file size I can upload in logarithmic row count series: 1,000, 10,000, 100,000 to start to determine if it’s a timeout problem.

Or even MediumData, for that matter.

Neither the Codename “Data Transfer” utility nor Codename “Data Hub” application CTPs would load 500,000 rows of a simple Excel worksheet saved as a 17-MB *.csv file to an SQL Azure table.

The “Data Transfer” utility’s Choose a File to Transfer page states: “We support uploading of files smaller than 200 MB, right now,” but neither preview publishes a row count limit that I can find. “Data Hub” uses “Data Transfer” to upload data, so the maximum file size would apply to it, too.

Both Windows Azure SaaS offerings handled a 100-row subset with aplomb, so the issue appears to be row count, not data structure.

The Creating the Azure Blob Source Data section of my Using Data from Windows Azure Blobs with Apache Hadoop on Windows Azure CTP post of 4/6/2012 described the data set I wanted to distribute via a publicly accessible, free Windows Azure DataMarket dataset. The only differences between it and the tab-delimited *.txt files uploaded to blobs that served as the data source for an Apache Hive table were 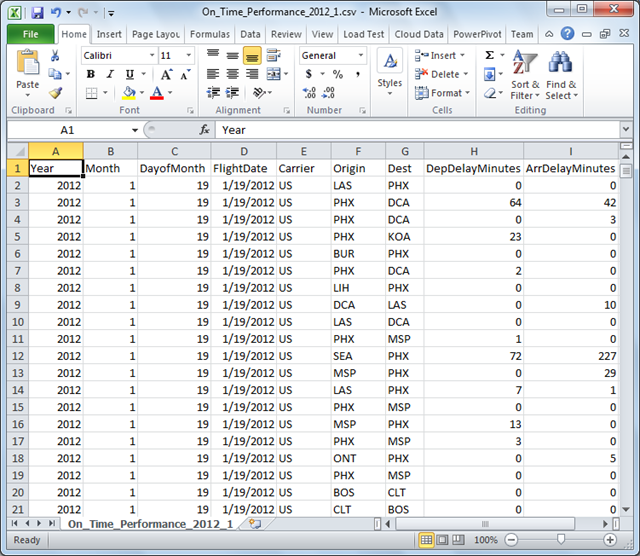 Tab-delimited sample On_Time_Performance_YYYY_MM.txt files (without the first row of column names and formatted date) for use in creating blobs to serve as the data source for Hive databases are available from my Flight Data Files for Hadoop on Azure SkyDrive folder.

Provision of the files through a private Azure DataMarket service was intended to supplement the SkyDrive downloads.

Codename “Data Hub” provides visitors with up to four free SQL Azure 1-GB Web databases, so I created a connection to a new On_Time_Performance database: 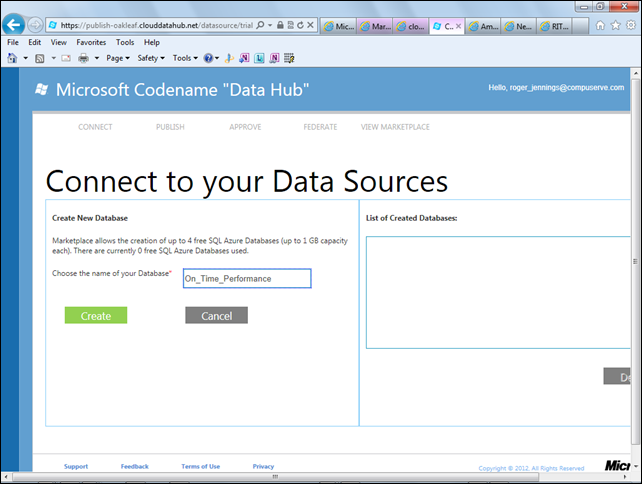 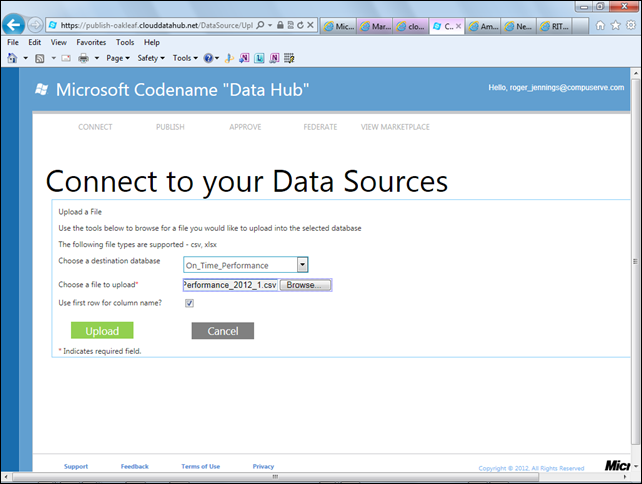 The site provided no indication of any activity, although my DSL router indicated data was being uploaded. After a few minutes, the server disconnected. Reloading the page showed no change in status.

I then tried uploading the 100-row On_Time_Performance_2012_0.csv, which opened the following page after about 10 seconds: 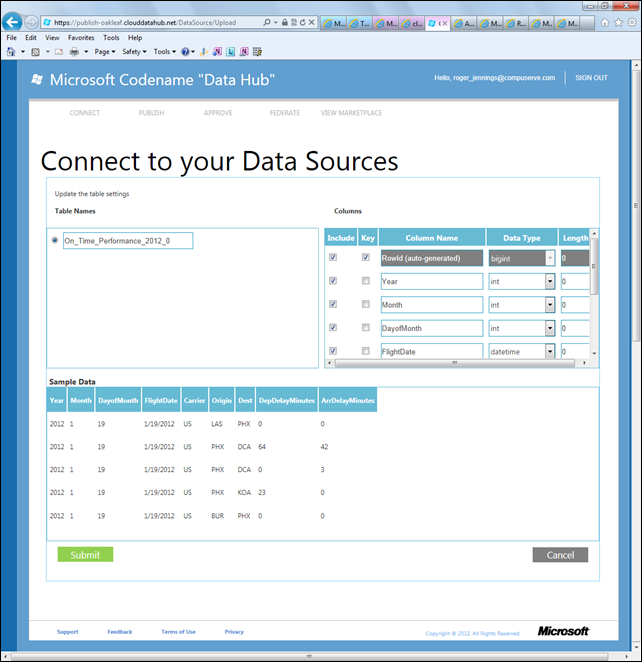 I accepted the suggested data types and clicked Submit, which added the data to the table.

I created a new database in an existing OakLeaf SQL Azure instance because “Data Transfer” doesn’t provide free 1-GB Web databases. I repeated the above process with Codename “Data Transfer” but encountered a bug which prevented use of the # (and presumably other symbols) in the existing database access password: 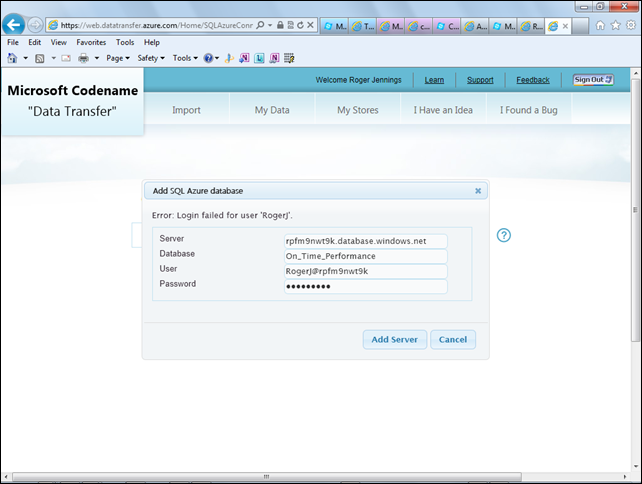 Selecting On_Time_Performance_2012_1.csv to upload by clicking Analyze caused the app to hang in the Loading … condition: 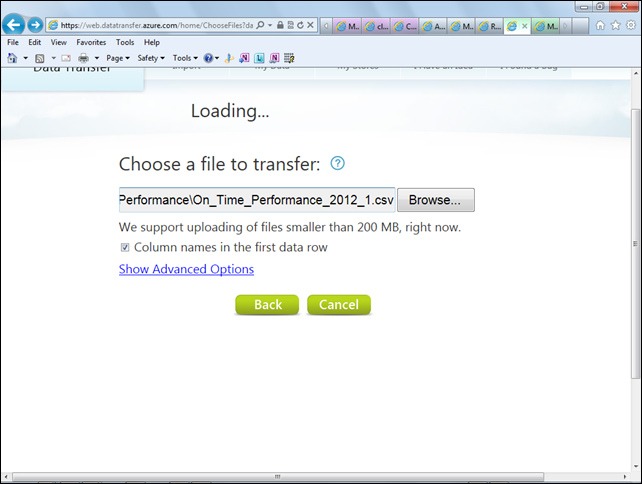 Canceling the process and selecting 100-row On_Time_Performance_2012_0.csv resulted in the expected Update the Table Settings page appearing in about 10 seconds: 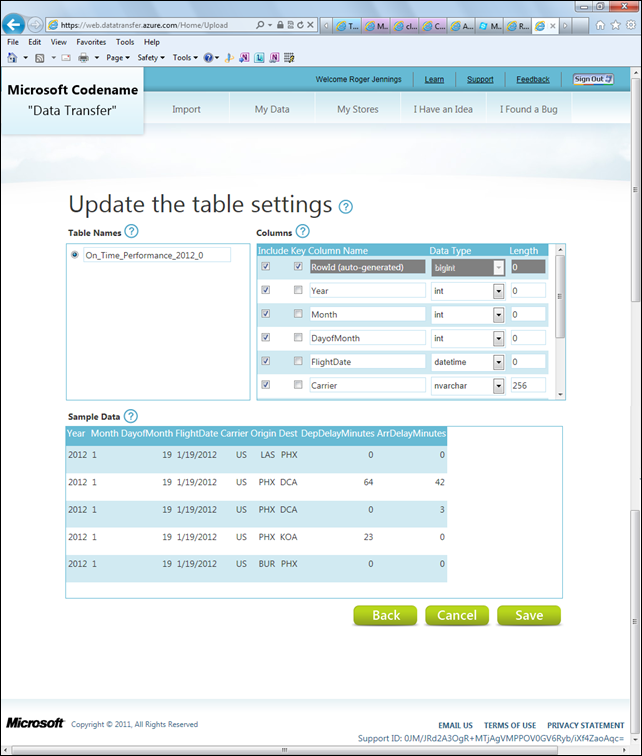 Clicking Save resulted in a Submit Succeeded message.