Well this was a very nice email to receive:

Congratulations on being awarded MVP of the Year based on your contributions in 2011!

It seems I must have done something(s) pretty right in my first year of MVPdom and word has it that my free OWASP Top 10 for .NET devs eBook tilted the voting in my favour. So for everyone who downloaded, RT’d, +1’d, liked, emailed and otherwise said nice things about my work, a heartfelt “thank you”!

Now I’m not the only MVP to receive this award; there are some other names that also received the same accolade and it’s very illustrious company to keep. I joined them for a dinner with S. Somasegar (“Soma”), Senior Vice President of the Developer Division and other luminaries from Microsoft whilst over at the MVP summit last week.

Well actually, “luminaries” barely does them justice; invitees included Scott Hunter (Principal Program Manager Lead for the ASP.NET team), Scott Hanselman (another Principal Program Manager – who should need no introduction if you work with .NET), Jason Zander (Corporate Vice President for the Visual Studio Team) and Anders Hejlsberg (lead architect for C# – possibly the most luminous of luminaries!)

Over the course of the dinner and at other times during the summit I had the privilege of meeting and talking to each one of these guys, something that will remain a summit highlight for me. Opportunities to speak casually with guys like Jason and Anders over a pinot grigio don’t come along every day!

Speaking to the other MVPs of the Year was also a highlight. I made some fantastic connections with folks who are at the absolute peak of their craft and as with all the MVPs I met last week, were more than willing to help on a whole range of fronts – just because they’re those kind of people. There’s not necessarily any financial upside or personal value to them beyond the simple pleasure of sharing their knowledge and passion with likeminded people.

I’ll write more about the summit a little later, but for now I have a nice little addition for the office: 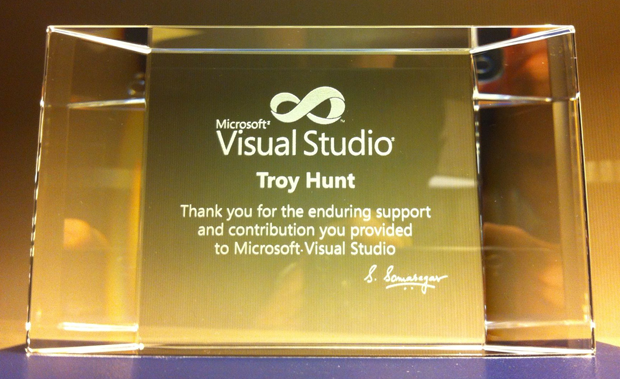