Alright, I knew this was coming. At least, I inferred. When I went to Microsoft few months back to attend the MVP summit, we had an awesome session from Anders, and I asked him what is the future of C#. He muttered something like “JavaScript is the true cross platform language” (Did I hear that right?) 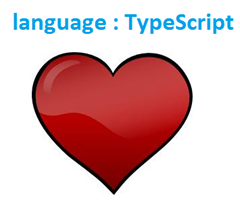 And there was some speculation that Anders was working on something related to JavaScript. And now, Typescript is here. TypeScript is a neat little language that compiles in to JavaScript, and the compiled output is readable and pretty printed it seems, so that you can use the compiled JavaScript directly where ever you want. I played around with Typescript, and it looks pretty neat (Yea, I’m repeating the term ‘neat’). The syntax has some magical similarity to the aesthetics of C# (or that was my feeling?). I’ve seen few people wondering whether TypeScript is Microsoft’s version of Dart or whether it is some kind of Coffee Script on Steroids – but after trying TypeScript out for sometime, I’m in love with Typescript. I was making some notes, and combined them for this blog post.

You can install Typescript from here , and then in Visual Studio, try creating an HTML application with Typescript. (OSS Fans Cheer up, Support for VI, Sublime and Emacs is also available) 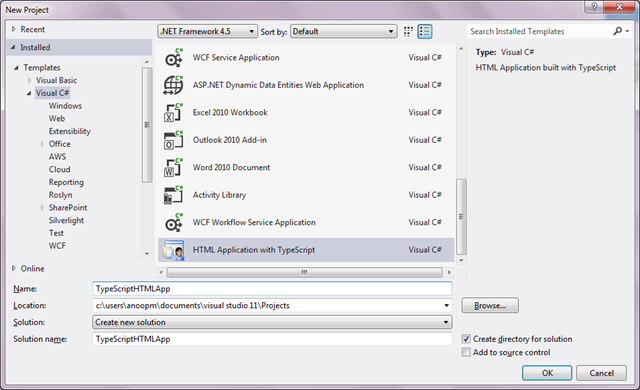 A Quick Hello World in TypeScript

Here is a quick hello world script I wrote using Typescript.  You can see the type script file (app.ts), and the generated app.js file.  As I mentioned, the syntax is very much similar to C#. And the big surprise – as the name indicates, TypeScript supports ‘Types’.  See my HelloWorld class below, I’m having a constructor which takes an HTMLElement, and I’ve got a sayHello method that accepts a message of type string. I feel having these type contracts will be a big boon because that’ll help programmers to specify expected types for a function. 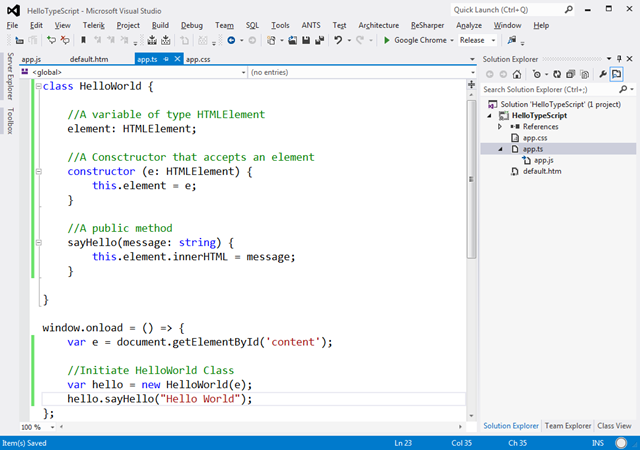 Awesome. Now, here is the generated Javascript code, that's equivalent to the above Typescript code. Neat and clean generation.

You can even use scope keywords in your TypeScript class - try making the element variable private, and sayHello method public. I also skimmed through the Type Script specification, and here are few other interested points I noticed apart from the Types support.

Typescript uses Function Types for handling call backs. Let us modify the above code, to have a call back. See that I've added a notify parameter to our sayHello method of type

This simply represents a function which takes a an input parameter of type string, and returns ‘any’ back to the caller (See ‘any’ type below). Upon the completion of sayHello, we are calling the notify(..) back, which will invoke the function(..) we passed to sayHello from window.onload – This is almost like passing a Function over a delegate type and invoking it back in the C# sense...

Run the project, fire up the HTML page, and you’ll see the first message box with “hello world”, and second message box with “completed sayHello” message. Pretty cool. We just learned how to write type safe call backs in TypeScript, elegantly, with out worrying about closures

You can give a name to an object type, like this.

Once you define an interface, you can use it as a contract, for specifying input, for return types, for call backs etc, with full Intellisense support. See below.

A Bit more about Types in Typescript

TypeScript has multiple types. Here is a quick overview

“Any Type is a super set of all types”

This include class, interface, module and literal types. These Object types contain one or more

Overall, I found that there is a strange attraction factor that connects C# developers with Type Script. I was able to start with out much hassle, and was able to grasp the basics in a couple of hours. Of course, introducing types ( CLARIFIED: i.e, types for enabling well defined contracts for functions, input parameters, return types etc) on a meta level and still maintaining the dynamic feature of JavaScript is a big thing as this means better refactoring, easier maintainability and better documentation. Enjoy TypeScript, I’m pretty sure I’ll write more about this pretty soon. I’m in love with Typescript.