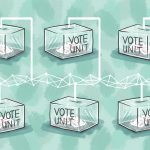 Blockchain is still very much a technology in its infancy, and for a while, Bitcoin dominated discussions around its potential application. There is a strong sense, however, that the possibilities are being explored more thoroughly.

Earlier this year, the UK’s Government Office for Science published a report on Blockchain and explored its use in a number of public spheres. Most of the use cases included in the report revolved around transactional ends, with areas such as healthcare a particular focus.

“In the NHS, the technology offers the potential to improve health care by improving and authenticating the delivery of services and by sharing records securely, according to exact rules,” it says.

One country that’s pioneering the use of Blockchain is Estonia, whose residents are covered in depth in the report because of their e-Residency feature that offers a digital identity to anyone starting a business online in the country.

The Baltic nation is continuing to lead the way via a partnership with US stock exchange Nasdaq. They will be using Blockchain to power a secure, digital shareholder voting system in the country.

The move is interesting because while the e-Residency allows foreign residents to start a business in the country, if they wish to own stocks in Estonian firms and participate in corporate votes, they need to physically be there to do so.

That is all set to change with the new system, which is due to launch later this year. It will allow people to vote at shareholder meetings from abroad.

Of course, while this project is limited to shareholder voting, there are clear possibilities for voting in a much wider range of elections. Estonia has offered online voting for a while, but it hasn’t taken off in other nations, despite a number of start-ups offering secure means to do so via devices such as a smartphone.

John Bercow, the speaker of the House of Commons, has pledged to offer online voting by the time of the 2020 general election, but with allegations recently of Russia tampering with the nominations for the Democrat candidacy, there remain clear concerns about the security of digital elections.

If voting online is to be allowed, then it’s crucial that the whole process is secure to avoid any unwanted interference, whether by foreign governments, fraudsters or even criminal gangs. Maybe Blockchain could be the technology to provide that level of security.

Data Mining the Votes of Members of the Polish Parliament