Goal: Migrate the UML-based engineering model of a spacecraft to TypeQL

Why Do This Migration in the First Place?

The spacecraft lifecycle is roughly divided into seven consecutive design phases. Part of the early design phases deals with the feasibility of the intended mission. Feasibility is identified by assessing each design aspect that is needed to accomplish the specific mission. 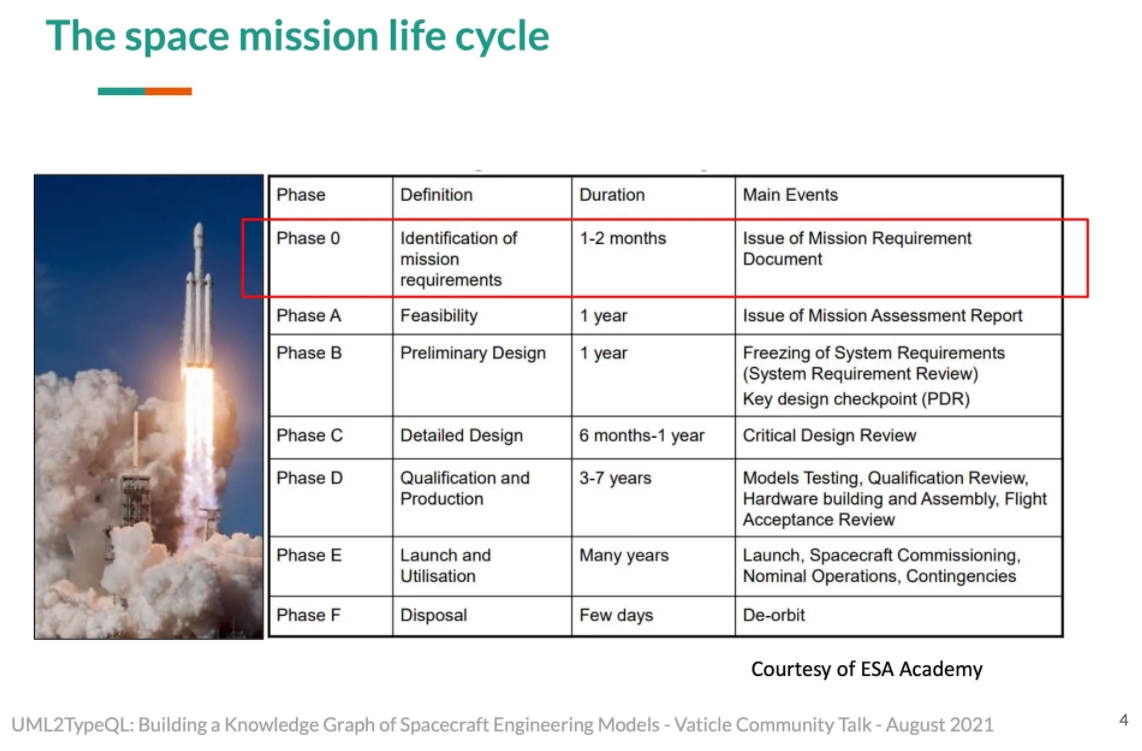 This requires that engineers lay out all possible design options and iteratively go through them in relation to all the other engineering design options, ultimately ending up with a sound system solution.

This requires various experts across domains to be reporting into and checking against a central engineering model. This design process is called concurrent engineering.

“A spacecraft is a complex puzzle of subsystems. Concurrent Engineering is a design process enhancing communication between experts and accelerating the convergence towards a sound design solution.”

Each expert needs to report their design architecture into a central engineering model. This then becomes the blueprint for the spacecraft. Each design has a project tree, comprised of all the components of a particular aspect of the space mission.

This quickly becomes a lot of information to organize, keep track of, and maintain. The structure of this blueprint is defined by European space standards, ECSS-E-TM-10–25A , provided in a UML class diagram. 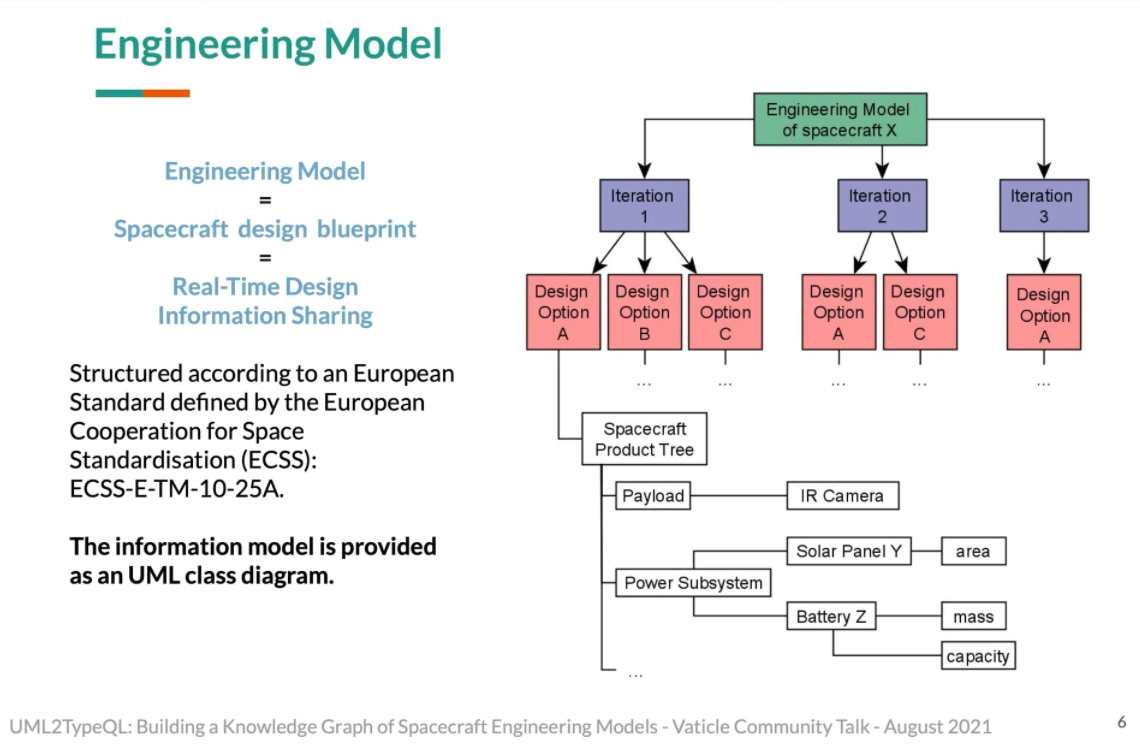 Over time, more and more engineering models are created. However, these models are disparate, making it challenging for engineers to make use of them as a collective source of information to be used over time. To enhance the data linkage, reusability, and interpretability of stand-alone models, the need to merge the models into one database becomes clear. This then allows for the mining of information within the models, comparisons between them, and the ability to infer new knowledge from them.

Why a Knowledge Graph and Not a SQL Database?

SQL databases aren’t built to represent relationships in your data and for the most part, don’t handle heterogeneous and unstructured data well.

Since Audrey’s team’s goal is to mine and discover information within the models, a database that can model relations naturally and aid in inferring new knowledge is needed.

To get the inference they were looking for, a schema that included the ability to define rules was an important requirement: “Without a schema to structure the database, there is no rule-based reasoning, thus no inference.”

Once the team noted the requirements they were looking for in a database, they set out to find a suitable one.

Researching the landscape, they noted quite a few options: Neo4J, Stardog, AllegroGraph, AnzoGraph, TigerGraph, and TypeDB. In the end, they evaluated nine different databases.

The parameters for making their decision were:

Ultimately, the team chose Vaticle’s TypeDB for the simplicity of the language, making onboarding easier and faster for engineers , the integrated reasoning engine, the presence of a strong community that is active and supports each other, and the availability of an open-source version.

How to Migrate UML to TypeQL

A Brief Introduction to UML

The building blocks of a class diagram in UML are: 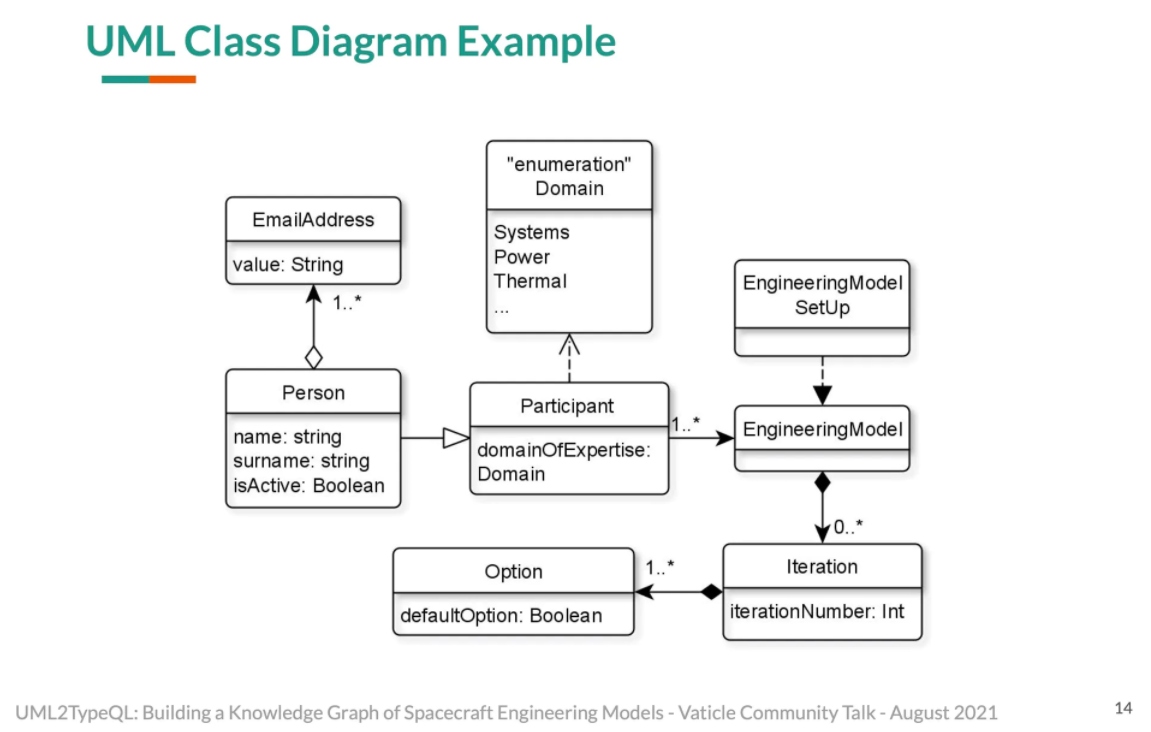 There are two main steps to doing this mapping: defining a schema and inserting data.

TypeDB is a direct implementation of the Entity-Relation diagram and makes Entities, Attributes, and Relations first-class citizens of the database.

As noted above, we map a UML class to a TypeDB entity, a UML property to a TypeDB attribute, and a UML relation to a relation in TypeDB. The schema is also where we can define the rules for the reasoning engine.

Starting with the mapping of a UML class to a TypeDB entity, the first thing to note is that TypeDB allows for single-type inheritance.

Looking at the example in the image below, we see that a Person is a subclass of four other classes. Three of these: shortnamedthing, namedthing, and deprecatablething , are Mixin's. While Thing is a concrete class. We redefine the three Mixin's as attributes of the person entity and using the TypeQL keyword sub we define it as a subtype of thing. 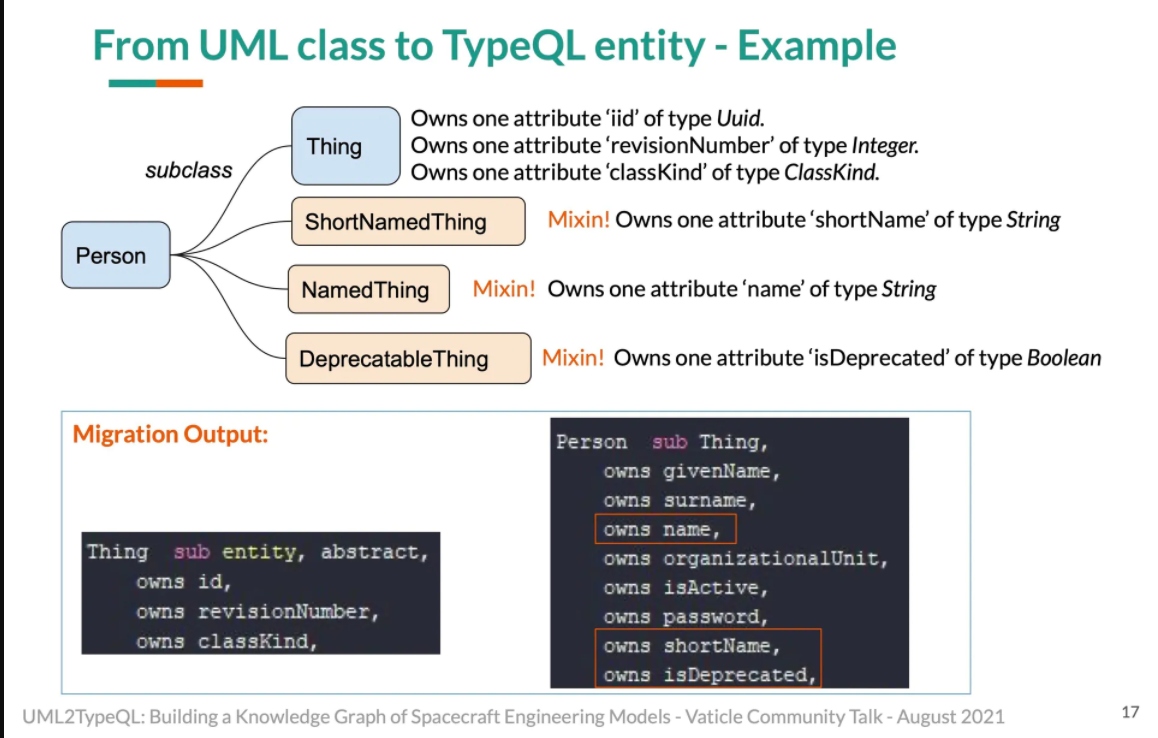 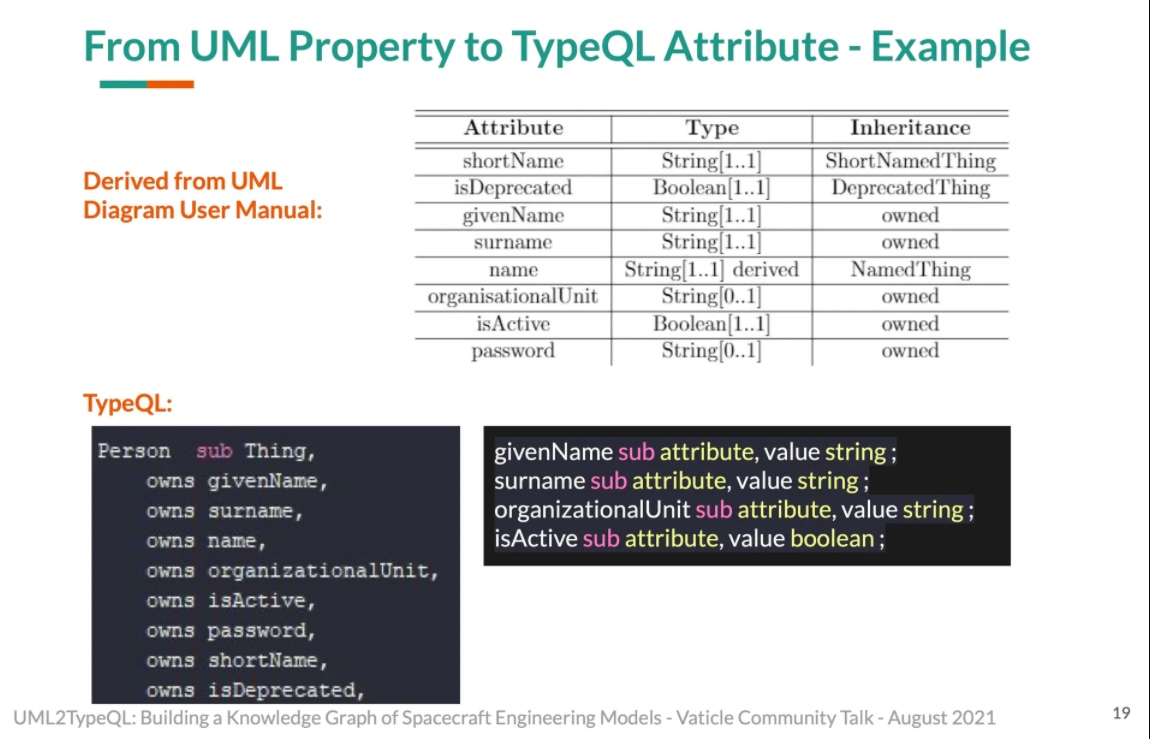 The example above shows all the attributes in the UML Diagram User Manual are defined as attributes owned by the person entity type. We also see an example of how we would define these using TypeQL (TypeDB's query language) in the console:

As we see in the example below, we need to define the relation type and the role type that is being played by the entity. 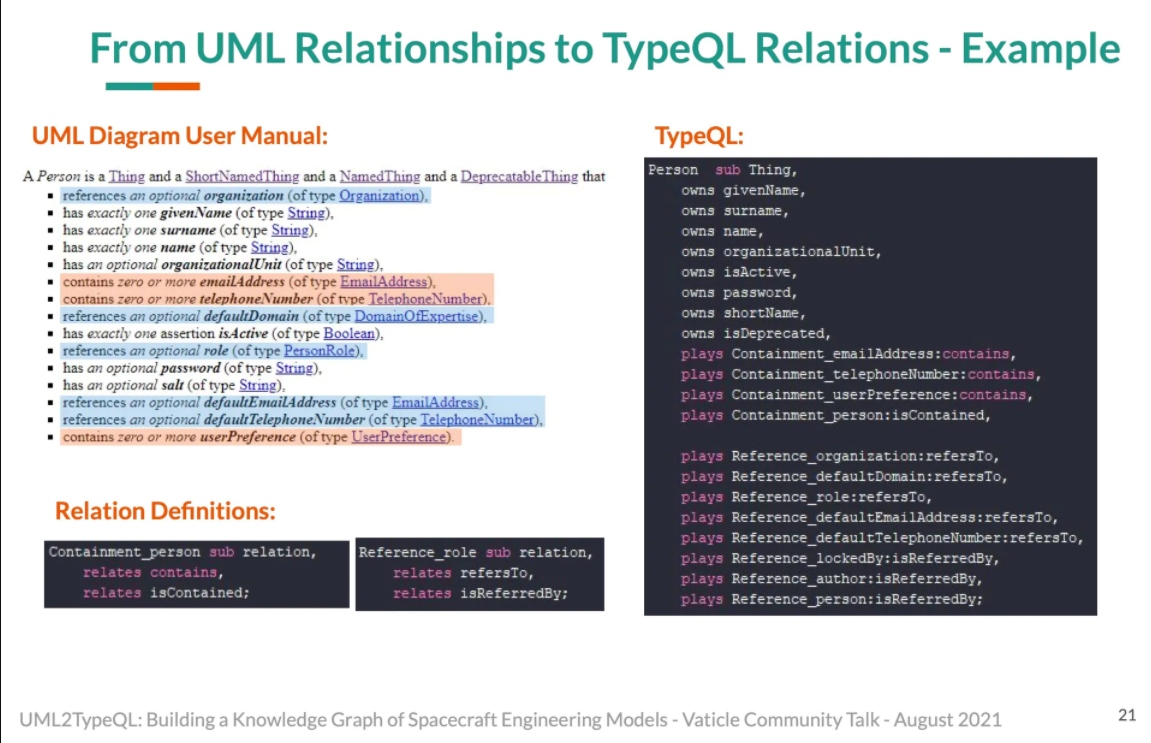 Exporting the engineering models as JSON files, we are able to map this JSON file to the TypeDB schema and build an insert query to get it into TypeDB. This is done via migration pipeline templates that take each element found in the JSON file and look at the class type. Each class type has its own template which then builds the TypeQL insert queries. We can see an example of one such template below. 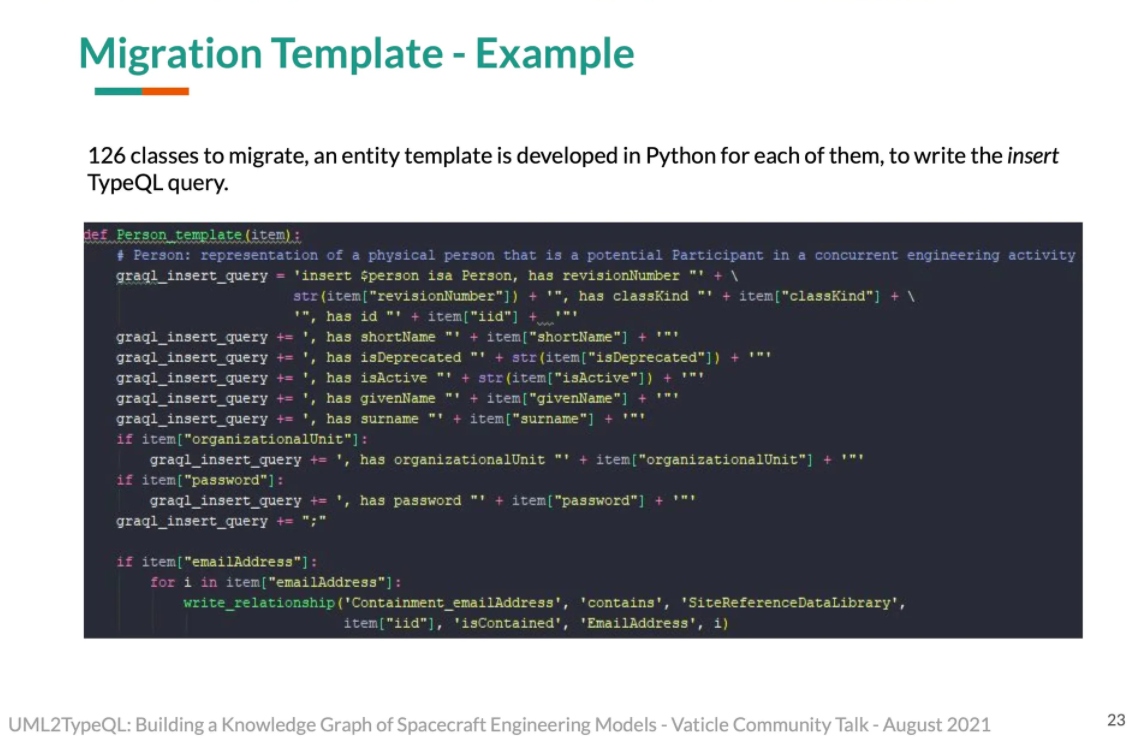 Where Is This Method Currently Being Applied?

The migration was applied to three Engineering Models, including two internal CubeSat models. This early implementation already demonstrated the power of using TypeDB as a knowledge graph for this use case. Tasks commonly performed by engineers such as mass budget computation could be automated, and TypeDB provided new insights into the data, enabling the quick recall of similar missions.

Published at DZone with permission of Daniel Crowe. See the original article here.