some weeks ago i had to migrate some independent mysql servers (some standard mysql masters, and some just standalone) to a percona xtradb cluster of 3 nodes.

so the easiest way would be to configure each node to become also an asynchronous slave of one of the production servers.
like illustrated here: but in this case there was one major issue, the tables where myisam and this is not really recommended with galera replication even if it’s now supported.

preparing the slaves would then become a loop:

so in this case that should have be done 3 times… that could take some time ! and then, if the single production servers where more than 3 ?

so i decided to use a wonderful feature of mariadb 10: multi-source replication .

mariadb’s multi-source-replication doesn’t have any conflict resolution. the assumption is that there are no conflicts in data between the different masters. which is the case here, all standalone servers handle different schemas.

i configured the mariadb server to be slave of all production servers, changed the table engine to innodb on it and chose one node of the pxc to be the async slave of that mariadb server. it worked like a charm and the migration of production to percona xtradb cluster became very easy. 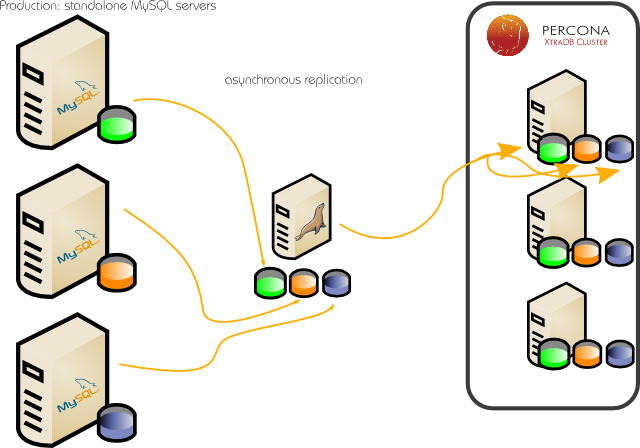 thank you mariadb’s team for this feature.

when a sever (a node) is member of a percona xtradb cluster is also standard slave (standard asynchronous replication of mysql), it can spread in the cluster all statements received from the master if log_slave_updates is enabled.