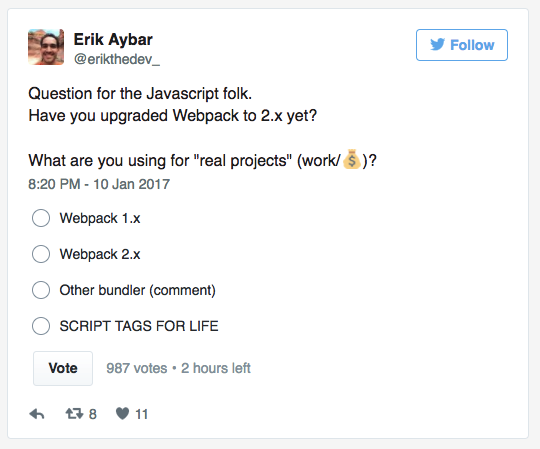 My motivation was "Ugh, I'm tired of these 3min+ local compile times. The amount of waiting is too damn high!" The new features are a nice bonus too. 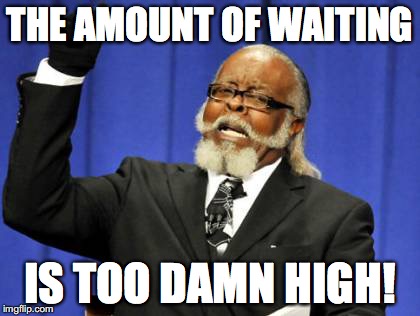 I love the new feature that highlights big files and tells you initial load sizes for different apps. I’ve been using it to eyeball different options, and I'm sure it has bigger use cases, too. Fine-tuning code splitting perhaps?

Then again, rc4 just disabled these features by default "because they're annoying." I liked it.

Webpack recommends keeping files under 250kB, which sounds like a lot, but it looks damn small compared to my code. Did you know 196kB of source ES6 compiles into about 920kB of browser-ready JavaScript? With minification, tree shaking, and dead code elimination! Without that, it's 2.3 megs.

BTW: Tree shaking removes unused dependencies (like when you import a whole library but just use a function or two), and dead code elimination removes code that's unreachable, like functions you never call.

So is upgrading to Webpack 2 even worth it?

Totally. Once they and the ecosystem resolve some issues, tree shaking will ride eternal, shiny and chrome.

Here are some gotchas I discovered while upgrading.

It's Not Quiiiiite Ready Yet (Dependency Hellish)

You can use Webpack 2 in production. I'm about to start. 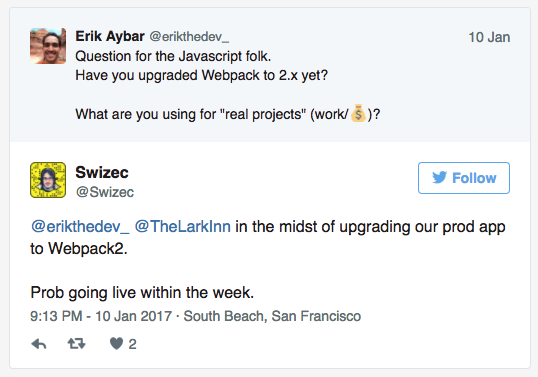 Although now that they’ve promised to release the final version in < 10 days, I might wait. Or gently delay the code review and QA process until their release. We'll see

When you upgrade to Webpack 2.2.rc.x, you fall into a small dependency hell with extract-text-webpack-plugin. The released version depends on Webpack 2.1, which is silly. If you're going bleeding edge, you might as well go all the way, ya know?

So here's what you have to do:

I'd show you the npm install command, but I don't know how to point at specific commits. See that #cbd4690 hash? That's the exact commit that says Add webpack 2 RC compatibility.

This is fragile and a terrible idea. You will forget to update this dependency in the future, and it will continue to point at a random commit for the foreseeable future. Happens every time.

But the published version on npm doesn't work.  I assume they'll fix it for final release.

It moves every require("style.css") in entry chunks into a separate css output file. So your styles are no longer inlined into the javascript, but separate in a CSS bundle file (styles.css). If your total stylesheet volume is big, it will be faster because the stylesheet bundle is loaded in parallel to the javascript bundle.

You also have to update babel-loader to at least 6.2.10. That's when they added support for Webpack 2 rc. Not too bad.

The new Webpack 2 docs are so much better. Check out this wonderful Migrating from v1 to v2 official guide. You basically have to do a find & replace, and you're done.

Just don't forget to take '' out of resolve.extensions. I don't remember why everyone needed that in the past, but I know that the new Webpack throws an error.

Error reports for bad configuration are also better now. That was fun to see. Loved it.

If you're not using Webpack to load CSS and compile Less or Sass, you should. It's made my life a lot easier. Especially the PostCSS plugin makes your CSS easier to write.

Going from Webpack v1 to Webpack v2 involved many changes in this config. We used to have this:

Which is probably too much config, but it worked. With Webpack v2 that's become more manageable and looks like this:

So much less code

That's because a lot of it is now in a different file called postcss.config.js. That one is a copypaste of the detailed config for postcss itself:

I don't know if the UglifyJS bug we're working around still exists, so I left the config as I found it. Just to be safe.

Looking at code blobs is hard, so here's what happened:

All of this used to be encoded in the loader bang syntax before: css?sourceMap!postcss-loader!less-loader?sourceMap=true

Whomever came up with the use: [] syntax, you're the best. I love the new approach.

Now, for the reason, we're all here: tree shaking.

Webpack 2 understands native ES6 imports and uses them as split points. That means it can organize your code into different chunks so you're only loading the JavaScript that you're using.

What it also means is that it understands when you're importing more than you need. Combined with the UglifyJsPlugin, it can eliminate that extra code.

I spent a lot of time looking for what exactly turns this feature on. Turns Out, it's on by default. Just Works.

Here's what you have to do:

See that {modules: false} in the babel-loader config? That's new. You can specify options when defining Babel plugins and presets.

modules: false tells the es2015 preset to avoid compiling import statements into CommonJS. That lets Webpack do tree shaking on your code.

UglifyJsPlugin without extra config will do what we need, but I wanted to show you the options. It's unused and dead_code that enable tree shaking.

However, we have to wait for the ecosystem to catch up. Most libraries are distributed with ES6 modules compiled to ES6, so in a real world scenario, you only get about 4% improvement.

With Webpack 2 around the corner, this is sure to improve. Can't wait!

You should also split your code into Your Code and Everybody Else's code. Webpack docs have a great guide on Code Splitting for Libraries.