Imagine walking through the jungle, cutting lianas with your machete and entering into dark caves filled with strange creatures and animals… while being at home. Stop imagining it! And welcome to the new world, to the mixed reality world.

The evolution and improvement of sensors and processing, mixed with advanced computer vision, graphical power, display technology, and input systems are allowing us to discover and feel with our eyes situations and environments that we never thought could happen.

This technology allows us to set feed on the edge of a cliff without the danger of falling, or play around with a flying cubic and even take the infinite starts to nowhere.

Mixed reality breaks down the limits of the physical world with the digital world. It is an evolution in human, computer and environment interaction.

The term was first used by Paul Milgram and Funio Kishono in 1994 for the categorization of the different displays applications.

What Is MR Made Of?

The reality as a whole that we see right now is a mix of the interaction of three different realities: human, computer (digital), and environment.

One reality is the conventional one, what we see with our eyes and the position that the people have in the world: surface, light, sound, object recognition, etc.

The relationship with the human and the computer has been studied over several decades, this discipline is known as Human-Computer Interaction (HCI).

The interaction between computers and environments is effectively environmental understanding, or perception. 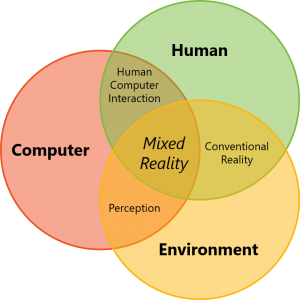 Without the environment, we can't blend physical and digital world, creating the dynamic interaction with the entire spectrum of situations between the real world and digital or virtual reality.

The entire spectrum can be represented with this graphic. Starting from the top left, we have the physical reality, our perception of the real world. But when we add digital or virtual reality to it, that changes the reality into Augmented Reality (digital content on the real world) or Virtual Reality (when a person or human input is surrounded by the digital world).

VR is an artificial, computer-generated simulation or recreation of a real-life environment or situation. It embraces the consumer and makes them believe they are immersed in another completely different one.

It tricks your brain with the use of a stereoscopic display, advanced 3D visual interfaces, and very different complements to make you forget that you are navigating through a virtual world; fully integrated with it.

Virtual reality gave the feeling of presence to the application.

The concept defines the feeling when we position ourselves in a specific moment and time. And through the use of all those different components of the application, we feel fully integrated with the digital world that surrounds us.

There are 4 characteristics that determine the meaning of presence:

Some of the accessories that allow us to interact and with the digital world are glasses, helmets, game controller devices, vibrating controllers, balancers, etc. All those tools help us to dive in and get more natural depictions of reality.

AR enhances your experience within the real world using digital information. What augmented reality does is simple — it pulls the graphics out of the television and into the real world. Imagine walking around the city and being hungry, what an ugly feeling to have, right? Well, with augmented reality and the proper app installed on your phone, you could be able to move around and search for the specific restaurant you are looking for. The camera phone recognizes the restaurants and points out an interactive icon into your screen.

It uses a graphics engine and a very powerful processor that can change the image in real time while still anchoring it to the physical world around you. It's about overlaying the digital and the real world.

The applications of augmented reality are infinite: video games, entertainment, communication, education… or the most exciting one for me, exploration and tourism.

We need four components to create a platform that can adopt AR.

Some current hardware accessories for A.R are glasses, cameras, or smartphones.

The key takeaway for understanding the shift towards VR and AR is their collective push towards enabling people to engage more naturally with computers — by simply looking, gesturing, conversing, and being — as opposed to dealing with interfering and unnatural interfaces like mice, keyboards, and flat screens.

Virtual Reality: At the Peak of Inflated Expectations?