i recently took a look at “ half-life 2: update ,” a mod offering a significant yet subtle graphical enhancement to valve’s 2004 masterpiece . the creator of “half-life 2: update,” filip victor, was kind enough to share how and why he produced the epic eye candy mod. “the inspiration to create the update came from ' half-life 2: lost coast ,'” victor explained. “lost coast” is a demo for “half-life 2” that began as a level within the game. however, after it was nixed, “lost coast” became a showcase for the technical proficiency of the source engine. it featured full high dynamic range (hdr) which translated on-screen to more realistic visuals.

“after playing the game [“half-life 2”] a few times back in 2005, i told myself i would really want to see this [technology] in ‘half-life 2,’” elucidated. “in 2006 when ‘half-life 2: episode 1’ came out, i remember that valve did not want to port ‘half-life 2’ to a recent version of source or add hdr anytime soon.” thus, victor opted to do the work himself.  interestingly, while the pc version of “half-life 2” was never officially updated to include full hdr or a new source engine, the xbox 360 port did.

“half-life 2: update” isn’t a drastic overhaul, like the “ half-life cinematic mod ,” but a huge facelift. the polished graphics transform the dated 2004 “half-life 2” into what appears like a recent release. major changes include full hdr, achievements, bug fixes, and even vr support. what’s fascinating is that victor was able to accomplish this substantial feat without any coding experience. “i never wrote a single line of code, although i was forced by certain circumstances to self-learn visual studio and recompile the base source code with some additional changes” he divulged. to accomplish the graphically enhanced mod, filip simply used the source engine, visual studio, photoshop, and various other tools. 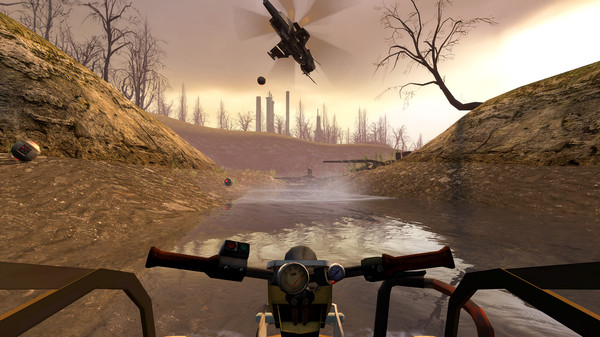 according to victor, 90% of the game was the same when comparing the xbox and pc releases. the two versions used identical game logic, but the xbox 360 port contained more props, a newer version of source, and full hdr. filip’s ultimate goal was to remain as faithful to valve’s original vision as possible. “i never wanted to add or rebuild valve’s content…all i did was make the game look different yet still the same,” victor clarified. his motivation for sticking with only valve assets: to please fans, and give them a familiar but new experience. you only have to browse the reviews on steam to see the fan reception. spoiler alert: it’s “very positive.”

“half-life 2: update” presents an aged classic with an updated veneer. it’s startling how much a few subtle, graphical tweaks can lend a new look to a old game, and filip victor’s mod is testament to the ease with which such mods can be produced. sure, a lot of work went into developing “update,” but victor only used source, visual studio, and photoshop. with no formal training, just tutorials, filip reinvigorated a groundbreaking game. plus, the system specs are ridiculously low, and “half-life 2: update” is playable on pc, linux, and mac. during development, victor had the opportunity to speak with many gamers about their in-game experience.  “i got to chat with a huge number of people that are playing on low-end hardware [integrated video] and hl2 does not run well or correctly apply the directx version properly,” he explained. filip added, “i was pleased that the update not only looked better but also ran flawlessly from day one.” it’s incredible how better performance was packed into such an efficient and faithful mod. “half-life 2: update” is available for free from steam, but you’ll need a copy of the original game to play.

with the luscious “half-life 2: update” now available, many fans have reached out to victor expressing a desire for update mods for both episodes. however, due to his full-time job, it’s a massive undertaking. filip has debated starting an indiegogo campaign to fund the ventures.