In this tutorial, our aim is to write a schema and load it into our knowledge graph; phone_calls. One that describes the reality of our dataset.

First off, let’s look at the dataset we are going to be working with. Simply put, we’re going to have:

people who call each other. Those who make calls have a contract with company “Telecom.”

People, calls, contracts, and companies. That’s what we are dealing with. But what do we want to get out of this data?

The below insights will give us a better perspective of what else needs to be included in the dataset.

This is all we need for determining how our schema should be defined. Let’s break it down.

A company has a name and can be the provider of a contract to a person, who then becomes a customer.

A person has a first and last name, an age, a city they live in, and a phone number. A person who doesn’t have a registered contract (not a customer) has only a phone number.

A call, made from a person(caller) to another person(callee), has a duration as well as the date and time it’s been made.

Now that we have a good understanding of our dataset, we can go ahead and write the schema for it.

But first, let’s visualize the reality of our dataset.

By looking at this visualized schema, we can identify the Grakn concepts.

From the Grakn Academy: Everything that describes your domain in a Grakn knowledge graph is a concept. This includes the elements of the schema (namely types and roles, which we call schema concepts) and the actual data (which we simply call things; you can think of them as instances of types if you are the programmer kind of person).

call is of type relationship that has two role players:

contract is also of type relationship that has two role players:

company and person are of type entity.

That’s all well and good, but how do we get our knowledge graph to reflect this model?

Open a new file in your favourite text editor, preferably one with syntax highlighting for Graql (.gql) files. Here are the ones for atom, visual studio code and sublime 3.

You can define the elements of a Grakn schema in any order you wish. I personally prefer to start from the relationships, as I see them to be the source of interactions — where knowledge is derived from.

Any relationship relates to at least one role that is played by at least 2 concepts.

In our case, a call relates to caller played by a person and to callee played by another person. 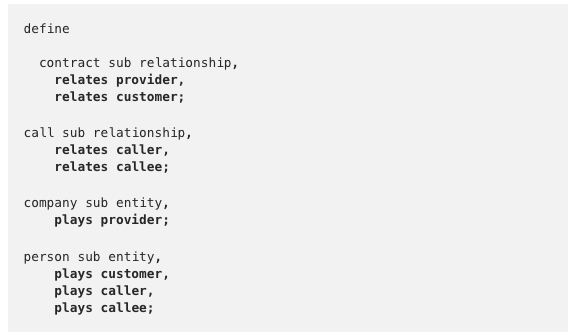 To define the attributes, we use the has keyword. 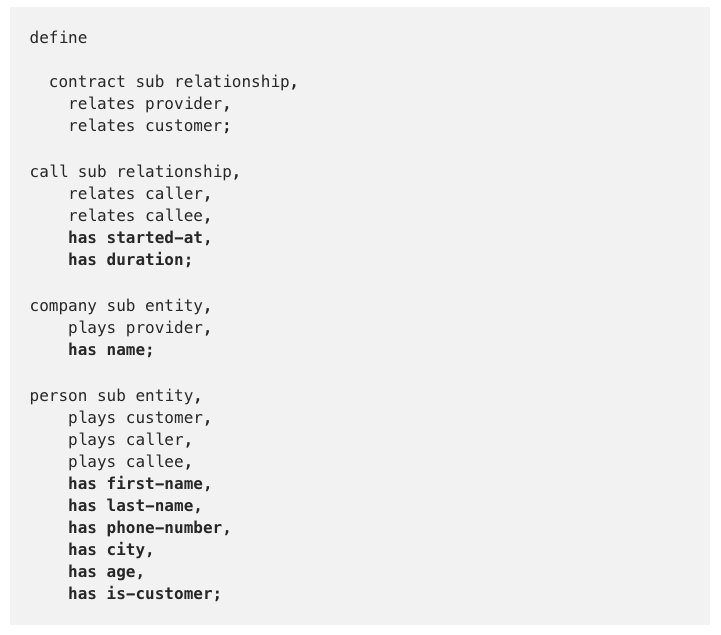 Lastly, we need to define the type of each attribute. 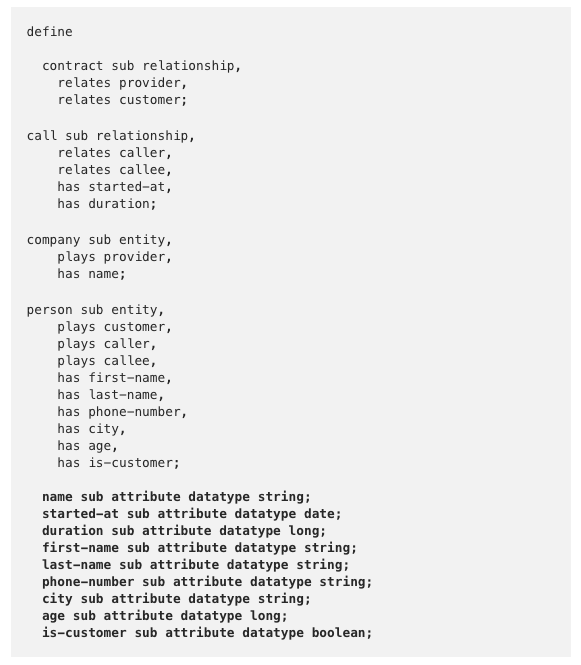 Note that we don’t need to define any id attribute. Grakn takes care of that for us.

Save the schema.gql file. In a few minutes, we’ll have it loaded into a brand new Grakn keyspace.

Load and Test the Schema

So here it is, the schema for our phone_calls knowledge graph.