managing your own threads within a java ee container is not recommended and even illegal in some circumstances. but where does that leave us when we want to use the shiny new java concurrency frameworks like fork/join and akka in java ee applications? the addition of new concurrency facilities to the java ee 7 spec may open some doors.

since both fork/join and akka start and stop their own thread(pool)s, the answer is: ‘it usually works, but it is not recommended within java ee containers’. unsatisfactory answer? you bet. but fortunately things may change with the next release of java ee.

most application servers already offer the possibility to get a managed (sort-of, kind-of) threadpool through the workmanager api. it was never standardized as part of java ee though. and even if it was, it would not be enough for the fork/join framework. the only pluggability you get when instantiating a forkjoinpool is a custom thread factory. for the record, it seems that akka can be configured with workmanagers.

however, standardization of application-facing, container-managed threading may be upon us. work on jsr-236 commenced in 2003. yes, that’s almost a decade ago. the first draft of the concurrency ee spec appeared in 2006, but unfortunately it languished ever since. in april of this year, however, the jsr was resuscitated and an updated version was published last month. even though the delta with the 2006 draft is minimal (e.g. ‘update package name from javax.util.concurrent to javax.enterprise.concurrent’), it is good to see things are back on the agenda.

so what’s in this elusive new javax.enterprise.concurrent package? i salvaged the following diagram from a 2006 javaone presentation , with the new concurrency facilities marked yellow: 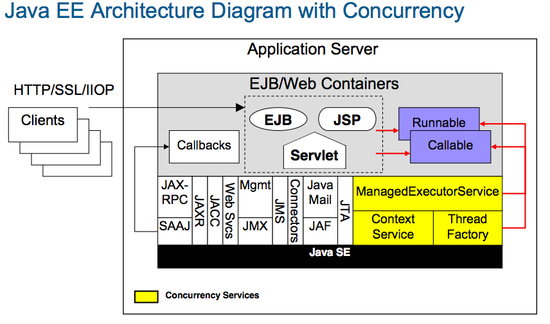 the two most important interfaces for enabling alternative concurrency frameworks are managedexecutorservice and managedthreadfactory , both extending their non-managed java.util.concurrent counterparts from java se. what does this managed prefix buy us? it means that tasks submitted and threads created through these interfaces will be fully aware of the java ee contextual services. things like transaction management, security context and so on are all available when the task is executed or the thread is used. the container is fully aware of the lifecycle of these managed threads, and can offer generic monitoring and tuning options.

another interesting aspect of the propesed managedexecutorservice is that it must support distribution. one of the following properties can be configured:

suddenly we have the building blocks for an asynchronous, distributed computation engine at our fingertips! obviously, the tasks need to be serializable for this to work.

you might be wondering why it is important to have these concurrency utilities, since java ee 6 already provides the @asynchronous annotation on ejb’s and async servlet support is also available. however useful these are for application development, the constructs are not meant to bootstrap other concurrency libraries and frameworks. with the proposed utilities, however, you could construct your own java.util.concurrent.threadpoolexecutor backed with managed threads:

similarly, forkjoinpool can be parameterized with a custom forkjoinpool.forkjoinworkerthreadfactory implementation that delegates thread creation to the managedthreadfactory. while trying to implement such an adapter i unfortunately ran into the issue that fork/join uses a custom thread subclass ( forkjoinworkerthread ). this makes the task a bit harder, it’s constructor being package protected. and obviously i can’t test the code, since i’m not aware of any (public) jsr-236 implementation. furthermore, i believe such adapters for java.util.concurrent should be part of the spec. no need to force application developers to reinvent the wheel again and again!

when reading the jsr-236 spec it is clear that it was crafted in the ancient j2ee times. just look at the code examples in the draft spec (ejbhome interfaces, really?). cdi is never mentioned, and neither is fork/join or other relevant newer technologies. still, it’s clear that this spec will lay the groundwork for integrating modern java concurrency frameworks with java ee. but exactly how this will work out is too early to tell.

another obvious candidate for using the javax.enterprise.concurrent functionality is the batch processing jsr. there’s lot’s of work to do it seems. let’s hope that expert groups find enough time to join forces and move the java ee platform forward.