This is the final article in the series on looking at the Inversion of Coupling Control (IoCC) composition.  The previous articles covered:

This article looks at providing a mathematical model to explain the composition.

You may also like: Functional Programming in Pure Java: Functor and Monad Examples

Just a little disclaimer that I'm not a mathematics boffin.  I have a degree in computer science, but it did not cover much functional programming. Much of this is through my self-taught understanding of functional programming and mathematics. Therefore, I'm open to feedback from more capable mathematicians on better ways to express the model. I'm hoping this article reasonably conveys the underlying model for composition with Inversion of Coupling Control.

From Category Theory, we have the associative law:

With this, we can introduce dependencies:

... where d is a set of dependencies.

This makes the program very rigid, as changing d1 to d3 has a significant impact for use of f(x)(d1 now d3). For example, switching from a database connection to a REST endpoint.

ZIO attempts to reduce the rigidity by the following:

Or, in other words:

Now, we can create lots of morphisms and at execution of resulting ZIO, provide a hom(D), which is the set of all required dependencies.

So, this model works. It is certainly enabling the injection of dependencies in functional programs.

Now, I'd like to take another tact to the problem.

Now, I certainly am not taking the tact to replace IO Monad with CPS. I'm looking to create a complementary model. A model where continuations decouple the IO Monads.

So, by introducing dependencies to the IO Monad, we get:

... where: d is the set of dependencies required

This then follows, that joining two IO together we get:

So, maybe let's keep the IO Monad's separate and join them via CPS. This changes the signature to:

The pesky z that the Imperative Functional Programming paper was talking about.

Note: the joined IO need only handle y or any of its super types. Hence, the relationship indicates the passed type. This makes it easy to inject in another IO for handling the continuation.

Now to start isolating the IO Monads from each other, we are going to start with Thread Injection.

... where TI is the Thread Injection Monad that contains the dependency to Executor mapping to enable executing the IO Monad with the appropriateExecutor .

This then has the above continuation between IO Monads relationship become:

Now, the IO Monads can be executed by the appropriate Executor via the TI Monad.

Further to this, we can model dependency injection with:

... where DI is the Dependency Injection Monad that supplies dependencies to the function.

Note that DI Monad will also manage the life-cycle of the dependencies.  A discussion of how this is managed will be a topic for another article.

So, the above IO Monad continuation relationship becomes:

Now, with Continuation Injection, we are not limited to injecting in only one continuation. We can inject in many:

Note: I'm guessing this can be represented on a single line (possible asset of continuations from a particular IO), but I'll leave that to a boffin more mathematical than me.

This means we can remove the Either and have the (possibly many) exceptions handled by separate continuations to get:

This demonstrates that an IO may now actually have more than one output. By having the ability to inject multiple continuations, the IO is capable of multiple outputs.

It is also execution safe. OfficeFloor (Inversion of Coupling Control) ensures the handling of one continuation completes before the next continuation begins executing. This ensures only one IO is ever being executed at one time.

Further to this, we can qualify DI. Originally, we had d1, d2 that was hidden by DI. We can qualify the scope of DI as follows:

P is the set of process dependency instances

T is the set of thread dependency instances

This allows for the following:

... while a spawned thread continuation relationship is modeled as follows:

What this essentially allows is multi-threading concurrency. Any continuation may spawn a new thread by starting a new set of thread dependencies. Furthermore, OfficeFloor will asynchronously process the continuation of returning control immediately. This has the effect of spawning a thread.

The same goes for spawning a new process.

Therefore, with OfficeFloor, processes and threading are a configuration, not a programming problem. Developers are no longer required to code thread-safety into their possible imperative code within the IO. As the seldom-used process dependencies are coded thread-safe, this relationship introduces the ability for mutability within the IO that is thread-safe. The isolation of dependencies prevents memory corruption (assuming dependencies respect not sharing static state).

OfficeFloor (Inversion of Coupling Control) is in this sense possibly the dark side. Functional programming strives for purity of functions being the light. Given OfficeFloor can handle:

OfficeFloor enables modeling of the darker impurities (or maybe I just watch too much Star Wars).

What we now have is a possible "inversion" of the function:

Function: strives to be pure, may have multiple inputs and only a single output.

IoCC: allows impurities, has a single input and may have multiple outputs.

I personally like to think of functions like parts of a machine. They are highly coupled engine cogs providing always predictable output.

Regardless, we now have a typed model that can be represented as a directed graph of interactions. The IO Monads are the nodes with the various continuations edges between them. An edge in the graph is qualified as follows.

y indicates the data type provided to the continuation

The result is the following example graph. 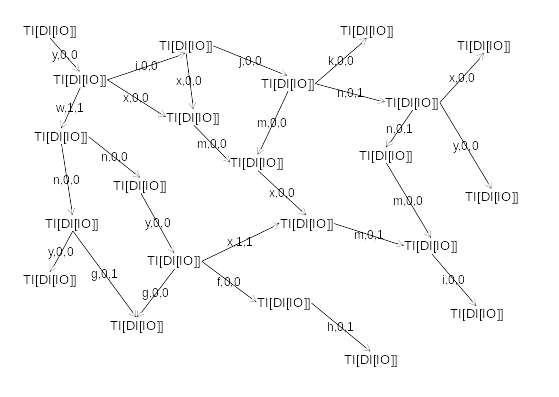 All of the above is already implemented in OfficeFloor.

The previous articles demonstrated the type system of Inversion of Coupling Control to enable composition. The type system also enabled encapsulation in First-Class Modules for easy assembly and comprehension of OfficeFloor applications. This was then demonstrated with a simple example application.

What this article has attempted to cover is the core underlying model. It has looked at how injected continuations can be used to join together IO instances. Further, it looked at the dependencies and how they can be used to model processes and threads.