one of the most persistent beliefs in corporate management is that money motivates people to do a better job. it’s used to justify exorbitant executive salaries and underlies the whole performance-appraisal/salary-increase/bonus dance. it also distracts managers from the vital challenge of increasing work’s intrinsic motivational power.

and it’s not true.

granted, i’m more likely to work for you if you offer me $100 than if you offer me $10, all else being equal.  but the link from that rule to, say, creating a bonus plan that increases hacker productivity, is tenuous to say the least. here’s why:

first, a key assumption is that you can really tell if i do a better job.  if i know you can’t, i’m not motivated to work harder, though i’m happy to take your money.  with hackers it’s extremely difficult to make fine-grained distinctions about performance because every work assignment is unique, and there’s massive noise in the form of meetings and other non-coding work.

second, it’s hard to design an incentive system that doesn’t produce negative side effects: pay an individual bonus for more output, you also get more bugs and less teamwork. pay for fewer bugs, get less output. pay for every bug fixed and wally gets a new minivan .  the stronger the incentive (the bigger the bonus), the greater the adverse side effects.

nothing illustrates this better than wall street, which provides enormous incentive compensation without earning a reputation for ethical behavior or exceptional performance. in the long run, i think technology firms that offer exceptional pay risk attracting people whose primary interest is money.  when growth slows these people can enrich themselves only by grabbing a bigger piece of the pie. your company may need to adopt a microsoft style org chart: [1] 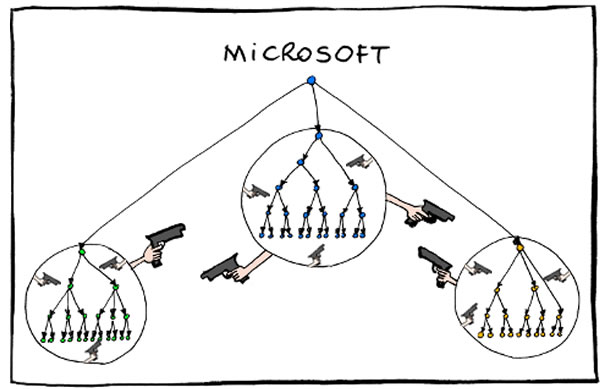 third, there are limits. the ‘decreasing marginal utility of money’ is economics 101. it says that the motivational impact of an extra dollar decreases as the total amount of money increases. hackers are among the best paid professionals in the world and every time you pay them more, you decrease the effectiveness of their next raise.

not only does economic theory itself casts doubts on the utility (pun intended) of monetary rewards, their limits are backed by widely accepted psychological theory, as well as large and small scale empirical studies.

at the very bottom are physological needs like breathing, until you’ve satisfied that, nothing else matters, but when you’re breathing easily, i can’t motivate you with an offer of even more breathing.

money, it seems, works the same way. if you don’t have enough to adequately clothe, feed and house your family, it dominates your motivation, but once you have passed that stage, more money is less motivating than things like friendship and learning.

large-scale statistical studies bear this out. as the economist recently reported , a study in china tracked contentment over a 20 year period during which the economy grew by 400%. the findings:

china was ideal for testing expectations of a correlation between economic growth and well-being. but what they found was “no evidence of a marked increase in life satisfaction” to match the rise in prosperity during that period.

numerous other studies show similar results. unfortunately, the relationship between satisfaction and wealth is not symmetrical. decreased compensation causes much more unhappiness than an increase of the same amount.  and if you pay someone a $10k bonus this year and an $8k bonus next year, it will feel to them like a $2k decrease.

not only do extrinsic rewards like bonuses lose their motivational power as people become better off, there is considerable evidence that they actually reduce intrinsic motivation . for an entertaining summary of this argument, check out dan pink on ted .

even in the business world, problems with incentive compensation aren’t exactly breaking news. frederick herzberg’s 1968 classic “ one more time: how do you motivate people ” has been reprinted 1.2 million times, more than any other article in the history of the harvard business review. for herzberg, money is a “hygiene factor”, which causes dissatisfaction when it’s inadequate, but generates very limited motivation when it’s increased above that point.

if this is all common knowledge, why is incentive pay still so widely used? a mckinsey study suggests one answer. according to them “many executives hesitate to challenge the traditional managerial wisdom: money is what really counts.”  but consider that most executives have generous bonus plans: could the real answer be that they’re incented to not see the truth ?

[1] this org chart is an “enhancement” created by joey devilla, based on the original, awesomely clever version created by bonker’s world .