Linear regression analysis has been called the "Hello World" of machine learning because it's widely used and easy to understand. It's also very powerful. We'll walk through the modeling process here using Smile and Tablesaw. Smile is a Java machine learning library, and Tablesaw is data wrangling library like pandas.

One of the best-known applications of regression comes from the book Moneyball, which describes the innovative use of data science at the Oakland A's baseball team. My analysis is based on a lecture given in the EdX course: MITx: 15.071x The Analytics Edge. If you're new to data analytics, I would strongly recommend this course.

The movie isn't half-bad, either.

Moneyball is a great example of how to apply data science to solve a business problem. For the A's, the business problem was "How do we make the playoffs?" They break that problem down into simpler problems that can be solved with data. Their approach is summarized in the diagram below: 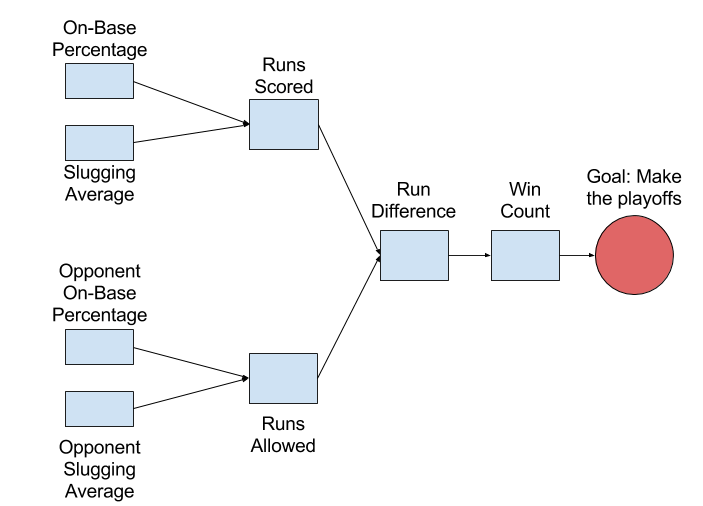 In baseball, you make the playoffs by winning more games than your rivals, but you can't control the number of games your rivals win. How should you proceed? The A's needed to find controllable variables that affected their likelihood of making the playoffs.

Specifically, they wanted to know how to spend their salary dollars to produce the most wins. Statistics like "Batting Average" are available for individual players, so if you knew Batting Average had the greatest impact, you can trade for players with high batting averages, and thus improve your odds of success.

To connect player stats to making the playoffs, they systematically decomposed their high-level goal. They started by asking how many wins they'd need to make the playoffs. They decided that 95 wins would give them a strong chance. Let's get some data loaded and check that assumption.

Next, we plot wins per year in a way that separates the teams who make the playoffs from those who don't. The "playoffs" column contains a one if the team made the playoffs, and a zero otherwise. We pass it to the ScatterPlot method to show that's how we want to group our data.

This code produces the chart below:

Teams that made the playoffs are shown as yellowish points. If you draw a vertical line at 95 wins, you can see that it's likely a team that wins more than 95 games will make the playoffs. So far so good.

The plots in this post were produced using Tablesaw's new plotting capabilities. We've created a wrapper for much of the amazing Plot.ly open-source JavaScript plotting library. The plots can be used interactively in an IDE or delivered from a server. This is an area of active development. Support for advanced features continue to be added.

At this point, we continue developing our model, but for those interested, this next section shows how to use cross-tabs to quantify how teams with 95+ wins have faired in getting to the playoffs.

We can also use cross-tabulations (cross-tabs) to quantify the historical data. Cross-tabs calculate the number or percent of observations that fall into various groups. Here, we're interested in looking at the interaction between winning more than 95 games and making the playoffs. We start by making a boolean column for more than 95 wins, then create a cross-tab between that column and the "playoffs" column.

As you can see from the table, roughly 82% of teams who win 95 or more games also made the playoffs.

Now back to our analysis:

To check this assumption we compute Run Difference as Runs Scored — Runs Allowed:

Now let's see if Run Difference is correlated with Wins. We use a scatter plot again:

Our plot shows a strong linear relationship between the two.

If we print our "winsModel," it produces the output below:

If you're new to regression, here are some takeaways from the output:

Of course, this model is not simply descriptive. We can use it to make predictions. In the code below, we predict how many games we will win if we score 135 more runs than our opponents. To do this, we pass an array of doubles, one for each explanatory variable in our model, to the predict() method. In this case, there's just one variable: difference.

We'd expect 95 wins when we outscore opponents by 135 runs.

It's time to go deeper again and see how we can model Runs Scored and Runs Allowed. The approach the A's took was to model Runs Scored using team On-base percent (OBP) and team Slugging Average (SLG). In Tablesaw, we write:

Once again, the first parameter takes a Tablesaw column containing the values we want to predict (Runs scored). The next two parameters take the explanatory variables OBP and SLG.

Again, we have a model with excellent explanatory power with an R-squared of 92. Now we'll check the model visually to see if it violates any assumptions. Our residuals should be normally distributed. We can use a histogram to verify: 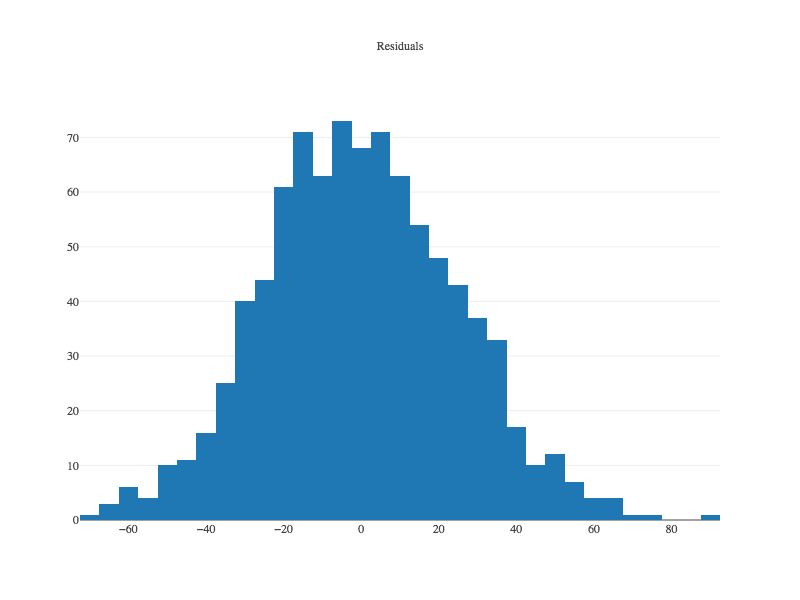 It looks great. It's also important to plot the predicted (or "fitted") values against the residuals. We want to see if the model fits some values better than others, which will influence whether we can trust its predictions or not. Ideally, we want to see a cloud of random dots around zero on the y axis.

Our Scatter class can create this plot directly from the model:

Let's review. We've created a model of baseball that predicts entry into the playoffs based on batting stats, with the influence of the variables as:

Of course, we haven't modeled the Runs Allowed side of Run Difference. We could use pitching and field stats to do this, but the A's cleverly used the same two variables (SLG and OBP), but now looked at how their opponent's performed against the A's. We could do the same as these data are encoded in the dataset as OOBP and OSLG.

This model also looks good, but you'd want to look at the plots again and do other checking as well. Checking the explanatory variables for collinearity is always good.

Finally, we can tie this all together and see how well wins is predicted when we consider both offensive and defensive stats.

The output isn't shown, but we get an R squared of .89. Again, this is quite good.

For fun, I decided to see what the model predicts for the 2001 A's. First, I got the independent variables for the A's in that year.

Now we get the prediction:

The model predicted that the 2001 A's would win 102 games given their slugging and On-Base stats. They won 103.

We used regression to build predictive models, and visualizations to check our assumptions and validate our models.

The next step would involve predicting how the current team will perform using historical data, and find available talent who could increase the team's average OBP or SLG numbers, or reduce the opponent values of the same stats. Taking it to that level requires individual player stats that aren't in our dataset, so we'll leave it here, but I hope this post has shown how Tablesaw and Smile work together to make regression analysis in Java easy and practical.

Published at DZone with permission of Larry White. See the original article here.