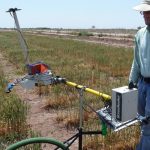 i wrote recently about an interesting new project that was using drone technology to measure the health and vitality of plants and crops.

the drones are fitted with a multi-sensory camera that is capable of capturing the plant growth from field to field. it does this by both visually monitoring the images captured, but also by measuring the wavelengths of light that are given off by each plant.

such services don’t need to be just air-based in their delivery, however, as evidenced by the phenocart service developed by researchers from kansas state university.

the device comes with a range of sensors that are attached to an arm, which in turn is attached to an old bicycle wheel. the device can be pushed through rows of crops, gathering information about the phenotypes as it goes.

as with the drone monitoring, it captures things such as the greenness of the leaves and the status of the plants themselves, thus aiming to extrapolate their general health and wellbeing from the data.

“it does monitoring, measuring and gps location. we’ve also built new analysis tools to run the phenotype data so we can make genetic decisions,” the team says.

“we document vegetation index with our greenseeker, same as you would in nutrient management. we have an infrared thermometer for canopy temperature. we’ve added a plant height sensor,” they continue.

suffice to say, it still requires someone to push the device through the fields, but it might nonetheless speed up the process.  whether it will find a market in comparison to drone-based services remains to be seen.