One of the most frequently mentioned challenges related to the creation of microservices-based architecture is monitoring. Each microservice should be run in an environment isolated from the other microservices so it does not share resources such as databases or log files with them.

However, the essential requirement for microservices architecture is that it is relatively easy to access the call history, including the ability to look through the request propagation between multiple microservices. Grepping the logs is not the right solution for that problem. There are some helpful tools that can be used when creating microservices with Spring Boot and Spring Cloud frameworks.

Many of you, even if you have not had used Java or microservices before, have probably heard about Logstash and Kibana. For example, if you look at hub.docker.com, among the most popular images, you will find the ones for the above tools. In our example, we will just use those images. Let's begin with running the container with Elasticsearch.

Then, we run the Kibana container and link it to Elasticsearch.

At the end, we start Logstash with input and output declared. As an input, we declare TCP, which is compatible with LogstashTcpSocketAppender and used as a logging appender in our sample application. As an output, Elasticsearch has been declared. Each microservice will be indexed on its name with a micro prefix. There are many other input and output plugins available for Logstash which could be used, which are listed here. One of another input configuration method using RabbitMQ and Spring  AMQPAppender is described in one of my previous post How to ship logs with Logstash, Elasticsearch, and RabbitMQ.

Now, let's take a look on sample microservices. This post is a continuation of one previous posts on my blog, about creating microservice using Spring Cloud, Eureka, and Zuul. Architecture and exposed services are the same as in the previous sample. The source code is available on GitHub (branch logstash). Like mentioned before, we will use the Logback library for sending log data to Logstash. In addition to the three Logback dependencies, we also add libraries for Zipkin integration and Spring Cloud Sleuth starter. Here's a fragment of the pom.xml for microservices:

There is also a Logback configuration file in the src/main/resources directory. Here's a logback.xml fragment. We can configure which logging fields are sending to Logstash by declaring tags like mdc, logLevel, message, etc. We are also appending service name field for Elasticsearch index creation.

The configuration of Spring Cloud Sleuth is very simple. We only have to add thespring-cloud-starter-sleuth dependency to pom.xml and declare sampler @Bean. In the sample, I declared AlwaysSampler, which exports every span — but there is also another option, PercentageBasedSampler, which samples a fixed fraction of spans.

After starting ELK docker containers we need to run our microservices. There are five Spring Boot applications that need to be run:

After launching all of them, we can try call some services — for example, http://localhost:8765/api/customer/customers/{id}, which causes the calling of both customer and account services. All logs will be stored in Elasticsearch with the micro-%{serviceName}  index. They can be searched in Kibana with the micro-* index pattern. Index patterns are created in Kibana under section Management > Index patterns. Kibana is available under address http://192.168.99.100:5601. After first running it, we will be prompted for an index pattern, so let's type micro-*. Under the Discover section, we can take a look at all logs matching the typed pattern with a timeline visualization.

Kibana is a rather intuitive and user-friendly tool. I will not describe in the details how to use Kibana because you can easily find it out by yourself reading a documentation or just clicking UI. The most important thing is to be able to search logs by filtering criteria. In the picture below, there is an example of searching logs by the X-B3-TraceId field, which is added to the request header by Spring Cloud Sleuth. Sleuth also adds X-B3-TraceId for marking requests for a single microservice. We can select which fields are displayed in the result list; in this sample, I selected message and serviceName, as you can see in the left pane of the picture below. 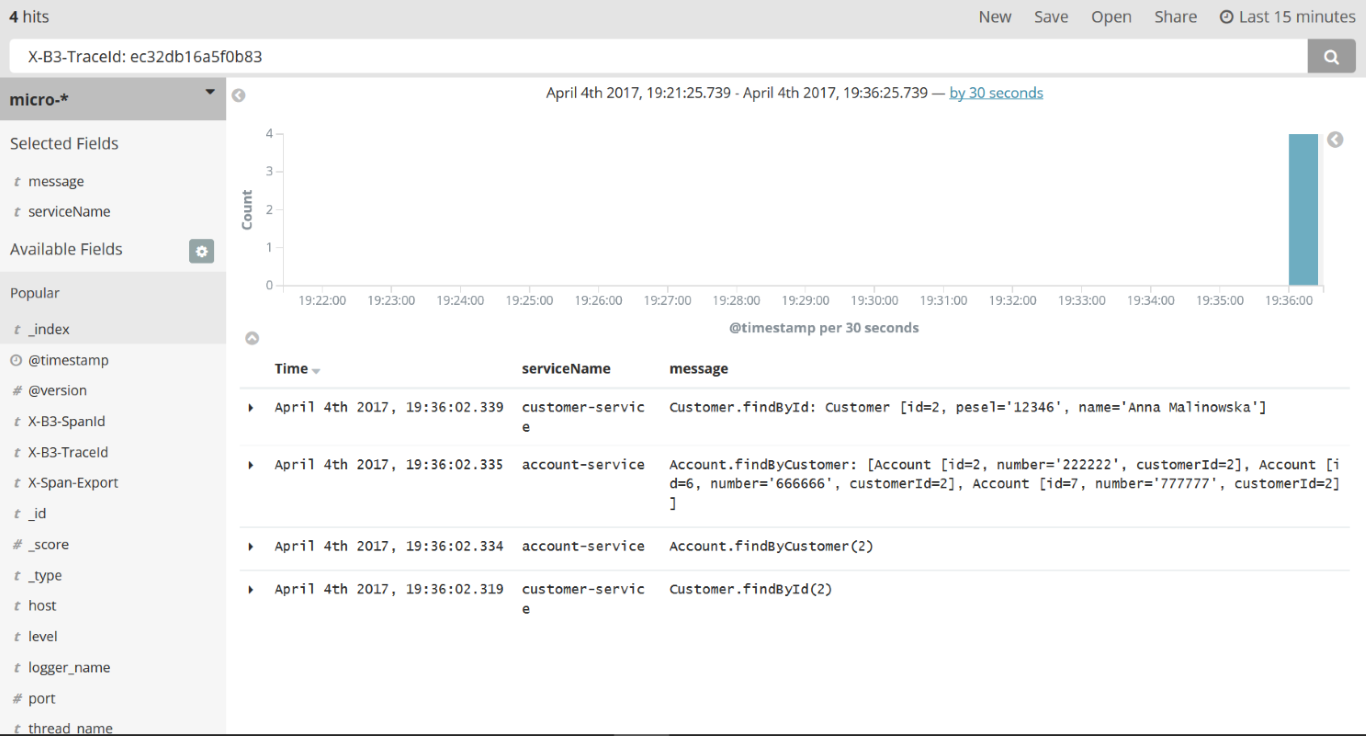 Here’s a picture with single request details. It is visible after expanding each log row. 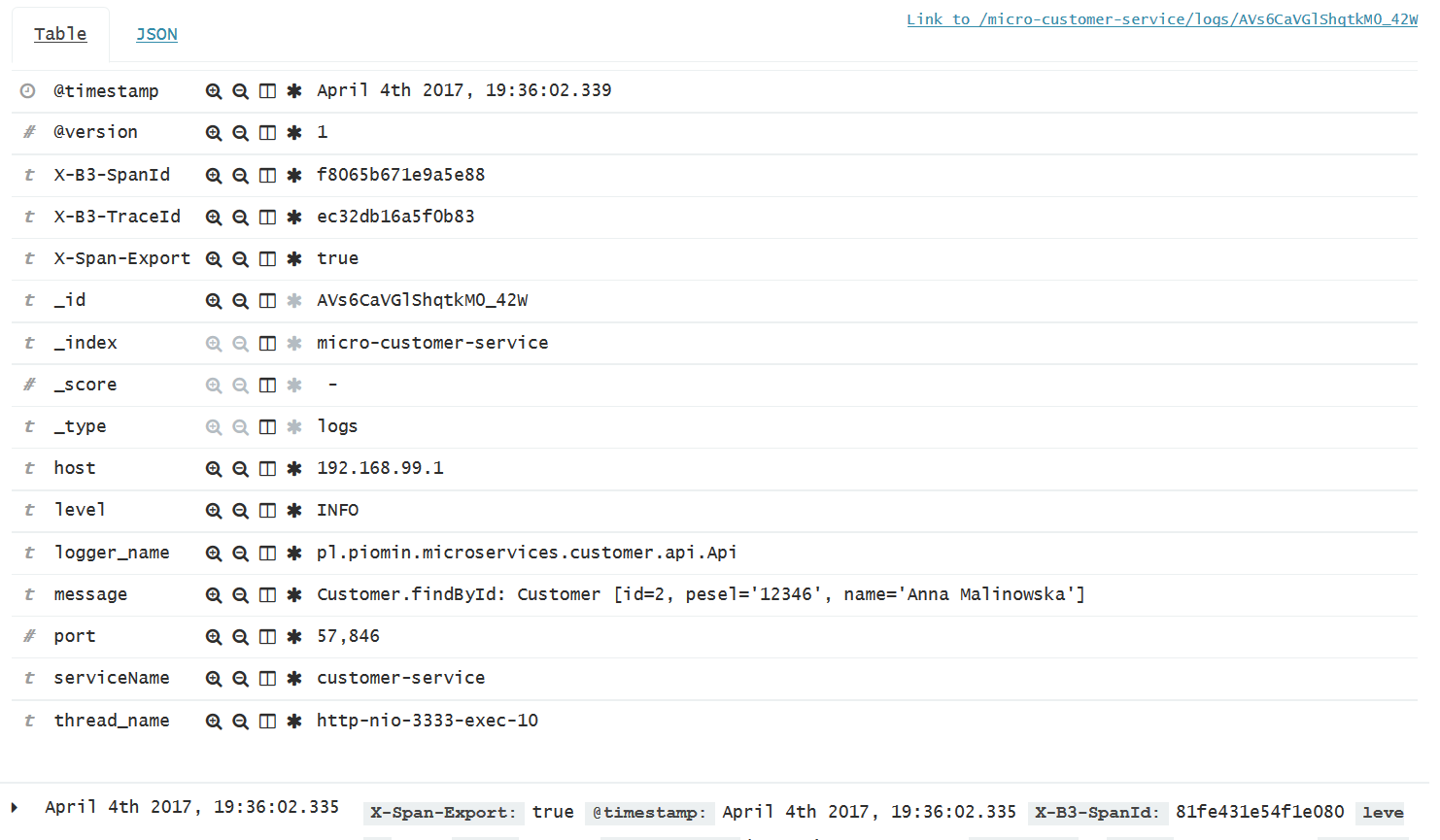 Spring Cloud Sleuth also sends statistics to Zipkin. That is another kind of data than the data that is stored in Logstash. These are timing statistics for each request. Zipkin UI is really simple. You can filter the requests by some criteria like time, service name, and endpoint name.

Below is a picture with the same requests that were visualized with Kibana (http://localhost:8765/api/customer/customers/{id}). 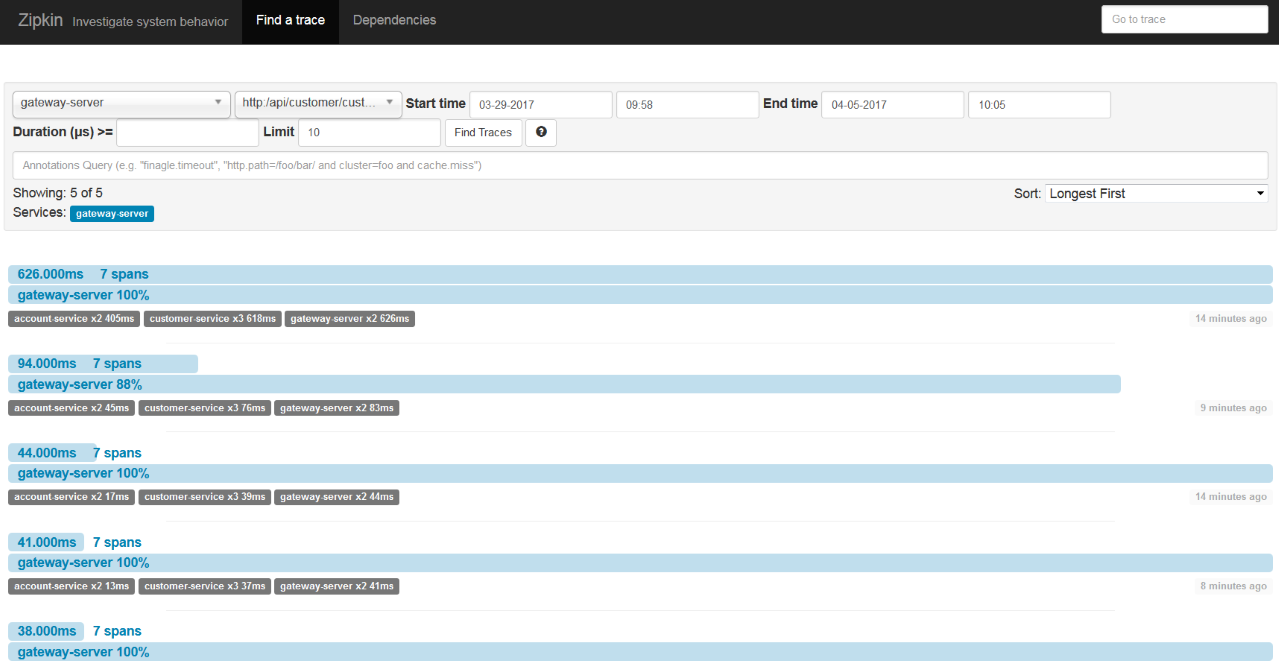 We can always see the details of each request by clicking on it. Then, you see the picture similar to what is visible below. In the beginning, the request has been processed on the API gateway. Then, the gateway discovers customer service on Eureka server and calls that service. Customer service also has to discover the account service and then call it. In this view, you can easily find out which operation is the most time-consuming.

Distributed, independent microservices and centralized log monitoring make for the right solution. With tools like ELK and Zipkin, microservices monitoring seems to not be a very difficult problem to solve. There are also some other tools — for example, Hystrix and Turbine — that provide real-time metrics for the requests processed by microservices.