"I  was toying around with switching to MonoGame earlier tonight.

First off, the transition was very simple. I downloaded MonoDevelop, OpenTK and the MonoGame source. I compiled MonoGame using MonoDevelop and got a dll out of it. I then deleted all of my XNA references from AstroMiner and added a reference to the MonoGame .dll.

After trying an AstroMiner build, I noticed a couple of differences. Texture2d.FromStream is now Texture2d.FromFile. render.SaveAsPng (for taking screenshots) is no longer available. Out of everything I do, that's it. Can't really complain.

So for not having to make any changes to the code (besides replacing FromStream with FromFile), I think it's a really viable solution. I'm going to keep researching to see if I can figure out how to fix the minor issues I had. It'd be nice to not require the XNA libraries and be able to publish to multiple platforms."

MonoGame is a free OpenGL implementation of the XNA Framework for MonoTouch, MonoDroid, Mac OS X, Windows & soon Linux. Our goal is to allow XNA developers on Windows & Windows Phone 7 to port of their games to the iPhone / iPod / Android / Mac OS X (visa versa), with minimal hassle. 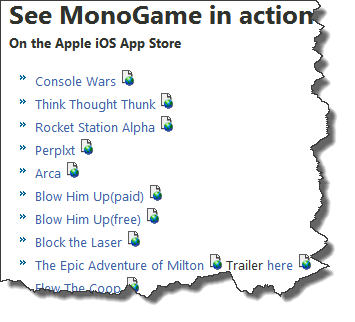 MonoGame is an open source implementation of the XNA APIs that allows developers to build 2D games that run on Android, iPhone, iPad, Mac, Linux and Windows using the same code base, or reusing existing XNA code that runs on Xbox 360 or Windows Phone 7. MonoGame 2.0 release is a major evolution of the platform. We went from only supporting the iPhone to becoming a cross-platform stack that now also runs on Android, Mac, Linux and Windows. To help developers get started, more than twenty individual samples and more than five complete starter kits are shipped with this release. On the iOS platform, MonoGame runs on top of MonoTouch and there are at least eighteen games published on Apple’s AppStore built using the technology. This new release opens the doors for developers to publish games to the Mac AppStore using MonoMac, to Android Market using Mono for Android, and also to Windows and Linux systems using Mono. This major advance in the MonoGame platform was made possible by an exponential growth in the number of contributors to the project in the last seven months. New contributors took over major components of the stack, tuned the performance, added new platforms, tuned the engine and fixed hundreds of bugs to turn MonoGame into a solid 2D gaming platform. A new networking stack allows players on the same network to play with each other. One player could be running the iOS client, while another one might be using a Mac and another one an Android device. All playing the same game. The latest framework sources can be downloaded from : http://github.com/mono/MonoGame. A group of multi-platform XNA Samples can be downloaded from : http://github.com/CartBlanche/MonoGame-Samples