However, the velocity of application deployment requires a new approach that involves integrating tools as early as possible in the deployment pipeline and inspecting the code and configuration against Kubernetes security best practices.

Kubernetes has many security knobs that address various aspects required to harden the cluster and applications running inside. Ops teams need to understand those security knobs and keep track of their implementation while ensuring the agility and efficiency of deployment cycles.

What is Kubernetes hardening? And what are the security guardrails to live by?

First, the goal is to minimize the permissions and network access, filesystem access, and API server access to the minimum required by the application without breaking it. This translates into protecting your deployments with continuous security and configuration checks, as early as your build, from development through production, following these simple milestones.

There are quite a few security aspects to consider around Kubernetes, including Pod Security Policies (PSP), network policies, API server access privilege, and many more.

Let’s focus on two examples of known and prevailing risks:

Alcide and Rancher: One Orchestration to Rule Them All, One Security Layer to Find Them

The increasing complexity of distributed environments opens the door to higher security risks and calls for new and innovative mitigation strategies. This is why we teamed up with Rancher and integrated the Alcide Advisor, a Kubernetes multi-cluster vulnerability scanner, designed to detect hygiene and conformance drifts from the CI/CD pipeline.

This integration adds a multi-cluster security automation layer on top of Rancher’s orchestration capabilities. DevOps and SecOps teams can continuously protect their Kubernetes deployments by leveraging Rancher’s resources and getting real-time data feed from Alcide directly into their Rancher account.

The Alcide Advisor is a Kubernetes multi-cluster vulnerability scanner that covers rich Kubernetes and Istio security best practices and compliance checks, much like the ones we covered here earlier. The Advisor is currently available via Rancher’s repository, simply packaged via Helm chart, allowing users to gain access and run a full cluster scan at early stages in a matter of seconds. It is also available directly from Rancher’s Apps Catalog.

The example below is a short snippet from a scan we ran on a demo cluster, showing some of the checks we are validating throughout the scan and, ultimately, presenting a summary report of the findings. This generated report can be also viewed as an HTML page: 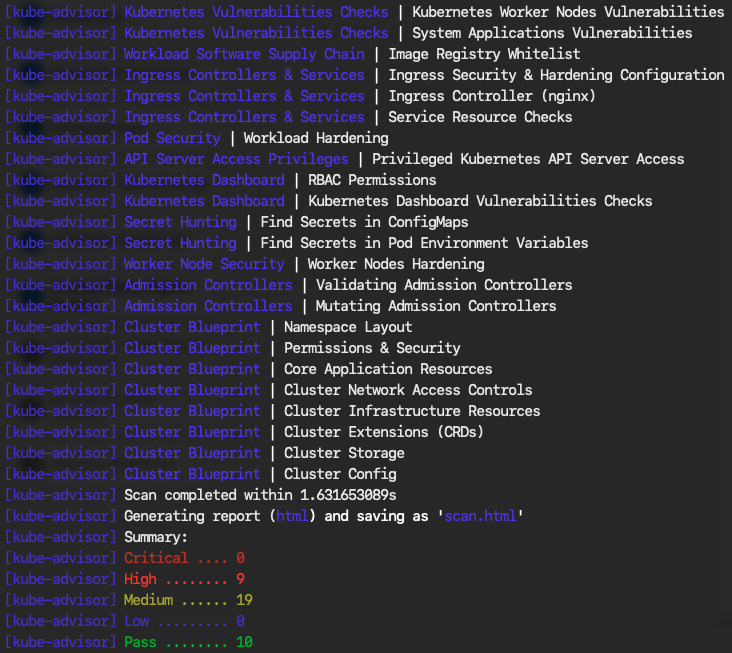 Why CD and Continuous Scanning Matter

While several tools can perform scans in earlier stages, remember that they can also render several configurations and resources like secrets, image sources, and RBAC settings. As a result, pre-deployment scans will not necessarily give you the most accurate mapping of issues you should aim for.

Automation pipelines end up provisioning first- or third-party container images, wrapped with Helm charts or Kubernetes resources, and inject configuration and secrets into various locations that are implementation-specific.

Continuously maintaining a high level of hygiene across multiple clusters is essential and should be tightly enforced throughout the CI/CD pipeline.

There are some key components to track, like cluster infrastructure, resources and workloads hardening, and more.

Combining Rancher’s management capabilities with a tight security layer by Alcide will ultimately accelerate operation processes and empower both DevOps and security teams. By leveraging Alcide with Rancher, you can establish a baseline of what is currently running in a cluster and ensure the existing environment satisfies expectations.