In the previous chapter, we learned about the following:

Also in the previous article, we faced a problem with a shared variable that shouldn't be shared or at least one that we have to define the order for updating this variable.

Java provides many ways to order access to shared data between threads; here, we start from the most primitive but pretty popular (in legacy projects) way to do it. Java Monitor Model is a model that decides how threads communicate with each other and provides synchronization keywords.

Java Monitor Model is like a phantom that orchestrates the threading order.  Let's take a look into this next example below:

You can see that inside the method doPrintSequentially, we perform print function surrounded by synchronized(MUTEX) construction. By wrapping code with that Mutex, we give access to that area only 1 thread at a time.

We can't say how precisely Java handles synchronization. Generally, it replaces synchronization keywords by a special condition that checks that the current Mutex is taken by some thread.  So if we rewrite the previous code, it might look like this:

Basically, it puts all threads in a blocking state until running one release Mutex by completing the synchronization part or changing its state to "WAITING". 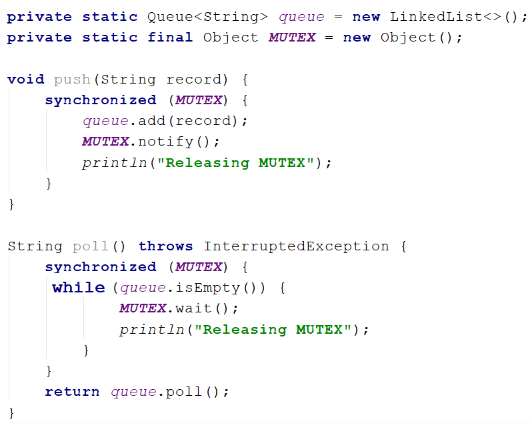 This Thread Safe Queue will be executed by 2 threads, John and Peter. John will try to get data from the queue and will be blocked because it's empty. The Peter thread will start 1 second later and push a new record in the queue and notify the blocked John thread. 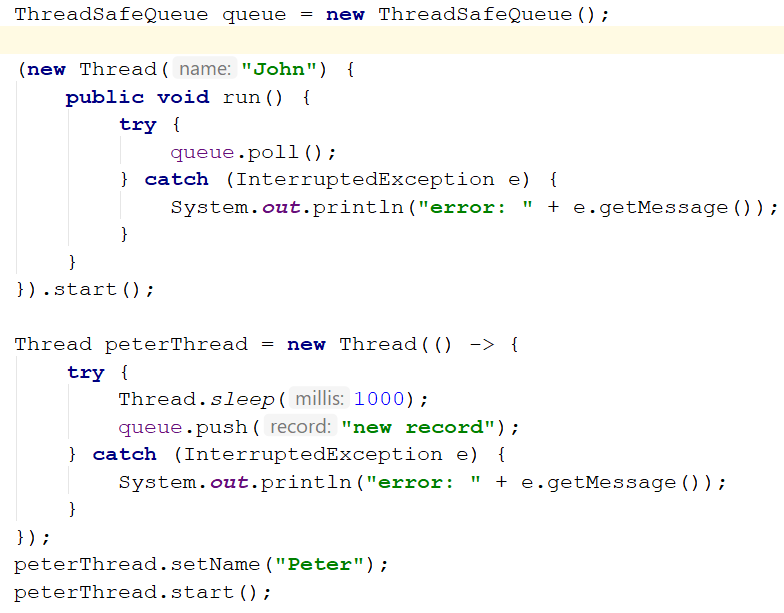 Now, let's describe the process of getting and pushing data in a thread safe queue or drama in 10 acts.

So, in this example, we described the communication between 2 threads using the keywords synchronize, wait, and notify. But, what if we start more than 1 getter thread? Well, in that case, the situation will be more complex. We will need to use the notify all synchronization feature in the next installment.