i think many java developers would say that using java collections is easy and that using generics can range from easy to difficult depending on what you're doing. however, there is much in java generics and collections ( o'reilly , 2006 ) to appeal to the advanced developer in its coverage of both generics and collections . the authors of this book point out useful practices related to generics as well as outlining which collections to use in different situations. even some experienced java developers may not always consider which collections to use in a particular situation as carefully as they should and this book provides insight into advantages and strengths of each major java standard collection as well as the drawbacks of each. the book delves deeply into the quagmire of generics and outlines important considerations such as the get and put principle .

charlie hunt's and binu john's java performance (pearson education, 2011 ) provides in-depth coverage regarding tuning of java applications. the book outlines the many facets of performance tuning as it summarizes the command-line options that are available and how they can be used to measure and tweak settings so that applications will perform better. this is a complex topic that is covered thoroughly and with focus on recent versions of java.

the well-grounded java developer ( manning , 2012) is a book that is definitely targeted at intermediate and advanced java developers. as i discussed in my review of the well-grounded java developer , it helps experienced java developers come up to speed on some of the latest java and jvm trends ( java 7 , dependency injection , scala , groovy , clojure ) while also covering some topics in depth that rarely receive that type of treatment ( class loading , performance tuning , concurrency). there are books that specialize in each of these topics, but this is one book that can quickly provide a foundation in all of these advanced topics (and more) in a single book. 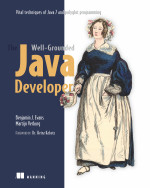 like generics, concurrency is another skill that even many advanced java developers can afford to enhance. java concurrency in practice ( pearson education , 2006, by brian goetz and a host of other java concurrency luminaries) is the de facto standard among java books for coverage of writing concurrent applications in java.