earlier this week, i tweeted about a history of web frameworks timeline i created for my upcoming future of web frameworks talk at tssjs vegas 2010 . i immediately received a lot of feedback and requests for adding new frameworks and releases. the image below is the result of that twitter conversation. thanks to everyone who contributed.

back in november , i wrote about my proposals for tssjs. i've been thinking a lot about web frameworks lately and i can't help but think we live in a very exciting time. as a java developer, i've been exposed to one of the most vibrant language ecosystems on the planet. as tim bray talks about , the java platform has 3 legs: the language, the virtual machine and a huge, immense library of apis (both in the jdk and in open source libraries). the diagram below is something i created based on tim's podcast. 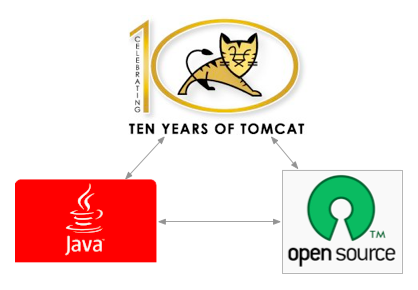 tim says, "one of those legs is replaceable and that's the language." and he's right, there's many java.next languages that run efficiently on the jvm. this is one of the most exciting parts of being a java web developer today. there's many proven web frameworks and languages that you can pick to build your next web application.

the best part is many of the best web frameworks run on the jvm. not only that, but the best code editors are the ides that you're familiar with and have grown to love. furthermore, much of the literature for java.next languages is written for java developers. as someone who knows java, you have wealth of web frameworks and languages just waiting for you to learn them.

of course, i haven't actually presented this talk yet, so it's likely to change in the coming weeks before the conference. the good news is this gives you the opportunity to provide constructive criticism on this presentation and help make it better. i realize that a presentation rarely represents the conversation that takes place during a conference. however, i believe it can portray the jist of my thinking and lead to a meaningful conversation in the comments of this post. below is the presentation i created - thanks in advance for any feedback.

for those who will be joining me at tssjs ... it's gonna be a great show. st. patrick's day in vegas, what more could you ask for?