last week i went to moscow, russia, for the .toster conference , that is being arranged several times per year but with different topics. this time one around, it was javascript.

22 years ago, i was in moscow to play ice hockey as part of a promotion for an old swedish ice hockey hero, sven tumba , who opened a golf club there. we were chosen as a boys team to play local teams and to get the ice hockey connection to the golf club. we also saw a performance at the bolshoi theatre, but when you’re young, almost all i remember is that the seats were uncomfortable…

russia was definitely a different place back then, and a lot have changed! 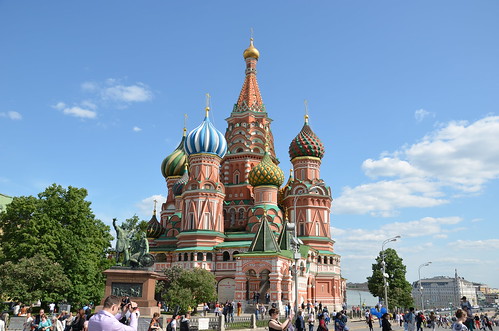 all my pictures from moscow, russia are on flickr .

so, i was a bit surprised to go through a lot of problems getting a visa. it was a mix of needing a business visa since it was a trip covered by mozilla insurance and just general administration.

the conference was organized by something called thematic media, running habrahabr.ru . they have lots of members in their community, creating the content on their web site – and from what i hear, a good number of them are firefox users.

i also have to say that the organizer in charge, alexander kozlov, was really good! no matter the time, or the problem, you could e-mail him any time of the day and get help. he took very well of the speakers, and constantly made sure that we had everything we needed.

when arriving in moscow, it took about ten minutes to go through customs. they looked at the visa, stamped it and that was it. when leaving moscow traveling home the security had one rule: do not take off your shoes!

all-in-all very different to all my visits to the us, with hours in line, then getting semi-naked and radiation scanned…

(yes, i know many things play in – mostly in here for comic effect)

the conference was a one-day, one-track affair with 300 attendees, with about half from moscow and half from far away places in russia (such as novosibirsk, in siberia!) and also many from ukraine. there were four international speakers at location, and two over a live stream. they also had three local speakers.

the venue was a good one, digital october , where president dmitry medvedev held some press conferences as well. technically everything seemed to work well, and the slides were projected on multiple plasma screens on both sides of the stage.

there were a few talks before mine, i was the last talk before lunch (at 15.00!). seeing the feedback the other speakers got on twitter following the #toster_ru hash tag , it was vicious! we had heard that russians can often try and ask very hard questions, but in this case it all went to twitter instead. there were a good amount of comments about how boring they found some talks, “write more, do less” about the code examples, saying they should ask for refunds etc.

they all tweeted in russian, of course, but google translate was a good help and i replied to a couple just to show that we actually read what they said (which you should, as a good speaker). so, with this perceived hostility, i was a bit worried about going up on stage. also, fellow speaker phil hawksworth just tweeted before i went on stage:

watching @ robertnyman fidget as he prepares to take on the twitter storm. hoping he does 50 pushups & shouts "charge" as he takes the stage

however, i’m happy to say, i pulled through! just lots of good feedback on twitter and i believe/hope they learned something!. the reactions were really good, and some of the tweets said:

“@robertnyman you were truly inspiring! thank you so much!!! #toster_ru”

“you’ve got it! awesome presentation! #toster_ru”

“@robertnyman is a great showman. used to be so

“like this should be conducted presentations and captivate the audience # toster_ru”

“speaker from mozilla really cool as a speaker

“well, anyway, and the report of robert nieman until the best of all! # toster_ru” 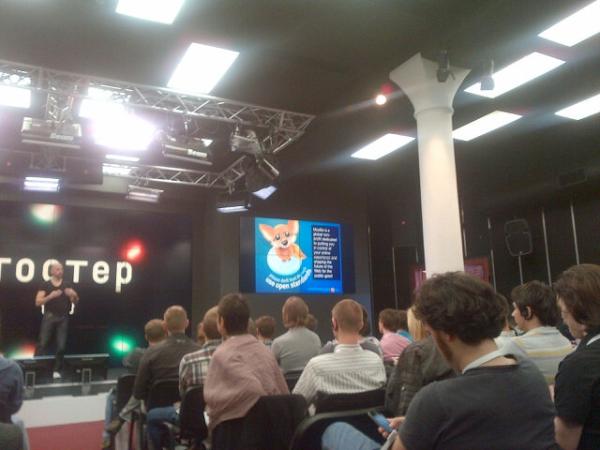 well, there was one single not-good tweet. it said something in line with: “do not like for some reason”. i reached out to him and asked what he didn’t like, so i could learn and improve. then he said that there was nothing wrong with me or my talk, but rather just that he had his own vision and didn’t need someone else’s. fair enough.

my slides are available on slideshare . i also demoed a boot to gecko phone to a number of people and they were quite excited about it!

after party, and culture

the after party, in the same venue as the conference, had a bar and lots of tables with people making moonshine . it basically looked like a chemistry lab in there, with bubble, vessels, tubes and lots of things going on. so, while i seldom drink , it was pretty interesting from a scientific perspective.

it was all ok, though, for people not drinking. i met a russian who didn’t drink at all, and i believe there were more than him.

during the evening, the attendees were so happy for having international speakers there and the talks they liked – many told me in person that they really liked my talk, which made me happy.

i and the other speakers were posing for tons of pictures with different people, signing autographs and such. it’s just small things that happen, but what i believe it comes down to is the attendees showing their appreciation that we took the time to visit their region and talk to them. something that’s vastly important and should never be underestimated.

additionally, i also got an invitation to speak in novosibirsk, siberia, next year. we’ll see about it, but they did say there would be 2 000 attendees to reach out to.