want to learn about other c# 6 features? check out the full list of articles & source code on github

nameof is a fantastic piece of syntactic sugar in c# 6, which aims to solve a major pain: magic strings. a magic string is a type of string in your application which is isn’t an input/output related but rather a marker or used for some comparison, for example you might do role checking with something that looks like this:

the issue with this string “admin”, is that there is no compiler checking for it. that means if you mistype the content of the string, you do not know it is wrong until the app fails. the second issue with a magic string, is that the refactoring tools do not commonly work with them, so if you changed “admin” to “administrator” in one place, there is no way to tools can find and update all the strings throughout you app and your app breaks again when it runs.

a lot of time you can clean this up with enumerators or objects. for example we can improve our role scenario but checking against an enumerator:

this no longer suffers from the two issues listed above

the problem remains with magic strings which refer to members (fields, properties, methods, types etc…) of your code. in this first example we have a magic string pointing to the property age:

for the second example we have a magic string  pointing to a class track:

and finally our third example is around checking a field for null and raising an exception, if needed, with the correct field name:

all of these examples suffer from the same two problems listed with magic strings, but until now, there hasn’t been a way to effectively clean them up.

the goal of the new nameof keyword is to solve this specific type of magic string, i.e. ones which refer to members in code. by using nameof we can change the above examples to the following:

note we have eliminated the strings completely! this means if you mistype a member name at compile time you would get an error!

we also get full refactoring support now, since visual studio and other refactoring tools can get the information they need to identify that it is a member and replace/rename as needed.

as mentioned at the start, this is just a case of syntactic sugar, the compiler is doing clever tricks for us and generating slightly different code. all nameof does, is instruct the compiler to convert the member to a string, so the outputted code is the same before with strings.

i want to recommend the tryrosyln website which is fantastic to experiment with c# 6 and also shows you the decompiled code side by side, basically showing you how the syntactic sugar works: 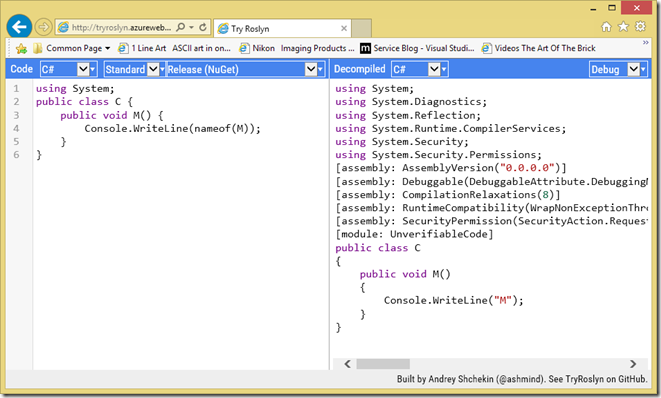 what does it output?

in the first set of examples we looked at simple members, but what if we have something more complex for example a namespace or a class & property. in these cases it will output the last part each time:

nameof isn’t a solution to everything in .net and there is a lot which won’t work. here are some examples:

is this a replacement for callermembername?

this seems to be similar to nameof but there are some fundamental differences, most importantly nameof is at compile time and callermembername is at runtime. this means that this one method in the example can work with multiple callers; i.e. i could take the above example and have a different member call it and it will output the correct name of the caller. there is no way to do that with nameof, which is basically hard coded values. there is some overlap of functionality and in some cases, like xaml + raisepropertychanged where you could pick one or the other based on taste, but these two pieces of functionality do have their differences and there are times where callermembername is the really only option.