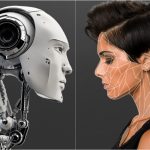 there are a number of companies now exploring the field of visual diagnostics, whereby smart algorithms attempt to detect various health metrics purely by looking at us.  whilst it sounds quite far fetched, the initial results appear promising.

a nice example of this comes via insilico medicine, who have recently released a paper that documents how they can detect the age of an individual from a number of visual cues.

insilico is the creator of aging.ai , which claims to be able to accurately predict our age based upon some relatively simple blood tests, and they’re confident that their methods can robustly track our biological age.

it’s believed that gaining a better understanding of these biomarkers will be a crucial step towards ameliorating the effects of aging.

such a leap is largely possible due to both the incredible rise in data available, and the high-performance computing that’s capable of making sense of this data via neural networks.

“while internally we are working on more sophisticated machine learning problems, aging.ai is a good example, where dnns outperform other machine learning methods and can be extended into multiple applications,” the authors say.

aging.ai is but one of around a dozen applications of deep learning being tried by insilico medicine in fields ranging from embryonic development to regenerative medicine.

the team worked with invitro laboratories, which is the largest independent lab test service provider in eastern europe, on the project. collectively, they went over a million or so samples to select their data before honing it down to around 60,000 samples.

they then trained 40 neural networks on this data to be able to predict chronological age. this analysis allowed the team to identify the key features in predicting our age, which included:

they hope that these may help in further exploration of the biomarkers that are key to aging.

“inspired by microsoft’s how-old.net, which can recognize your age using a photograph, an approach we also employ in projects with skincare collaborators, we decided to train an ensemble of deep neural networks on a very large number of simple inexpensive historical blood tests linked to age and sex and built a predictor, which is scalable and can include many other data types to build more comprehensive biomarkers of aging. aging.ai can in principle be extended as a biomarker of biological aging that can be used to assess the efficacy of various therapies”, the company says.