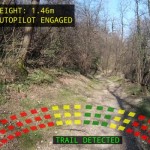 i’ve written a few times recently about the use of drones in emergency situations, whether it’s flying a defib device to heart attack patients or helping to build emergency shelters for the homeless.

a swiss project is aiming to use drones as a more effective way of rescuing hikers.  swiss authorities say that roughly 1,000 call outs are made each year for lost or injured hikers.

these call outs can often take a significant amount of time, both to locate the lost individuals, and to then rescue them from the mountainside.

the drones , developed by a team of researchers at the university of zurich, promise to make the process quicker and easier, thus helping more people each year.

the drones come with a deep neural network that allows the device to learn the numerous trails and paths in a mountain range.  each drone is fitted with a range of cameras that are capable of detecting man-made paths.

this accuracy, coupled with the speed of the drones, make them an incredibly effective tracker for locating stricken hikers, and therefore a potent aid in search and rescue missions, whether they be in mountain ranges or other similar situations.

the ai engine built into each device is capable of creating a safe route free from hazards for human rescue workers to make their way to the casualties.

despite this considerable promise, the technology is very much in its infancy and more work is required to enable the drones to accurately detect human beings.

whilst at the moment, the technology is only being used to find casualties, there are obviously improvements being made in passenger drones that hint at a possible future for search and rescue capabilities.

it will certainly be an interesting trend to follow.