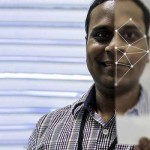 Anyone that has traveled by plane will be all to aware of the painful process of getting through security.  A new innovation from a Norweigan team promises to reduce the time delays involved in checking passengers in significantly.

The technology detects when we enter the airport, and then tracks us through the airport until we’re at the arrivals hall at our destination.

“When a lot of people gather in one place, queues develop quickly,” the researchers say. “Rather than stop every single person at an airport gate, we’ve developed algorithms that recognize people’s faces, based on electronic passports with a photo and ID number.”

By identifying and checking passengers on the fly, it allows approved individuals to journey through the airport automatically.  The facial recognition software used by the technology is already developed, and their next stage is to test it out in a number of airports around the world.

Suffice to say, with any technology of this nature, privacy is bound to be a concern, but it’s an issue that the team are aware of and on top of.

"Privacy is our top priority. The information on individuals’ movements is not stored in the databases. If someone were to hack the databases, they wouldn’t be able to reconstruct the data," they say.

The team chose facial recognition as it’s the easiest means of identifying users without causing delays as it doesn’t require any actual contact with the user.

There will be inevitable differences in how the system is deployed based upon the privacy and data protection requirements of states, but the team have done their best to prevent data from going astray.

“As researchers, we try to minimize the risk of personal information going astray. There’s always the possibility of being hacked when you save information digitally, but in using biometrics we try to mitigate this risk by avoiding centralized storage,” they say.

It will certainly be an interesting project to follow, and it may even come to an airport near you soon.