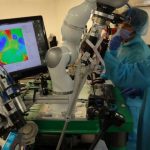 robotic surgery is a topic i’ve written about a few times, whether it’s the development of a more tactile robotic surgeon that’s been developed by researchers at the john a. paulson school of engineering and applied science and the wyss institute for biologically inspired engineering, or even the californian start-up that’s taking robotic surgery inside the body.

it’s clear that significant strides are being made, with the latest being the smart tissue autonomous robot (star) that’s been developed by a team in washington d.c.

just as with the wyss team, they have been working on increasing the capability of the robot to perform nimble and delicate procedures, with the eventual aim being to supersede that of even the best human surgeons.

the team uses 3d imaging and impressive force sensing capabilities to stitch wounds to a submillimeter level of precision.  it was created using experienced surgeons as teachers, with the eventual aim of surpassing the capabilities of its mentors.

the project, which has been documented in a recently published paper , offers the tantalizing prospect of automated and hugely accomplished surgeon to perform the 45 million or so such operations undertaken in the us alone each year.

the developers believe that their system allows patients to receive the very best care, regardless of where they are, as the machine will operate at a consistent level and be able to absorb the latest thinking in double quick time.

suffice to say, we are still unlikely to get to a scenario where the surgeon is removed from the equation altogether, as star still requires a human surgeon to oversee its work and step in should they be required.

nonetheless, it does provide a glimpse of the direction of travel, and with improvements being made all the time, such systems will only get better at performing the kind of jobs previously reserved for only the most highly skilled of humans.

check out the video below to see star in action on a pig’s liver.