TL;DR: As software becomes the force driving industries of all types and sizes, the nature of app development and management is changing fundamentally. Gone are the days of centralized control via complex, interdependent, hierarchical architectures. Welcome to the Internet model of software: small pieces, loosely joined via the microservice architecture. At the forefront of the new software model are business managers, who base software-design decisions on existing and future business processes.

Anyone who works in technology knows change is constant. But change is also hard -- especially the kind of transformational change presently occurring in the software business with the arrival of the microservices model of app development, deployment, and maintenance. As usual, not everybody gets it.

Considering how revolutionary the microservices approach to software design is, the misconceptions surrounding the technology are understandable. Diginomica's Phil Wainewright gets to the heart of the problem in a September 30, 2014, article. When Wainewright scanned the agenda for an upcoming conference on the software-defined enterprise, he was flabbergasted to see all the focus on activities within the data center: virtualization, containerization, and software-defined storage and networking.

As Wainewright points out, the last thing you want to do is add a layer of "efficient flexibility underneath a brittle and antiquated business infrastructure." That's the approach that doomed the service-oriented architectures of a decade ago. Instead, the data center must be perceived as merely one component of a configurable and extensible software-defined enterprise. The foundation of tomorrow's networks are simple, easily exchangeable microservices that permeate the organization rather than residing in a single, central repository. 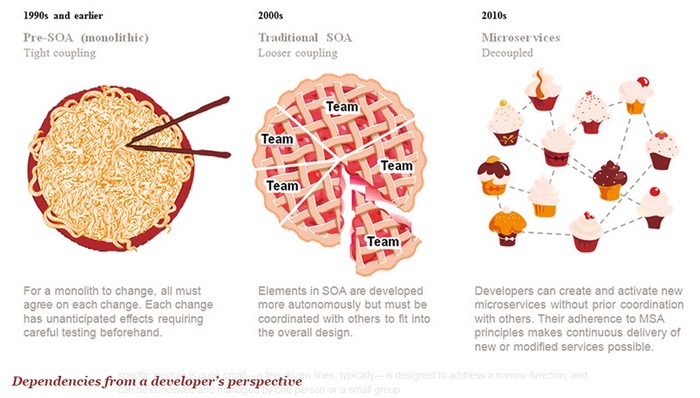 To paraphrase a time-worn axiom, if you love your software, let it go. The company's business managers must drive the decisions about technology spending based on what they know of the organization's goals and assets.

Like SOA, microservices are designed to be more responsive and adaptable to business processes and needs. What doomed SOA approaches was the complexity they added to systems management by applying a middleware layer to software development and deployment. As ZDNet's Joe McKendrick explains in a September 30, 2014, article, the philosophy underlying microservices is to keep it simple.

The services are generally constructed using Node.js or other Web-oriented languages, or in functional languages such as Scala or the Clojure Lisp library, according to PricewaterhouseCoopers analysts Galen Gruman and Alan Morrison in their comprehensive microservices-architecture overview. Another defining characteristic is that microservices are perfect fit for the APIs and RESTful services that are increasingly the basis for enterprise functions. 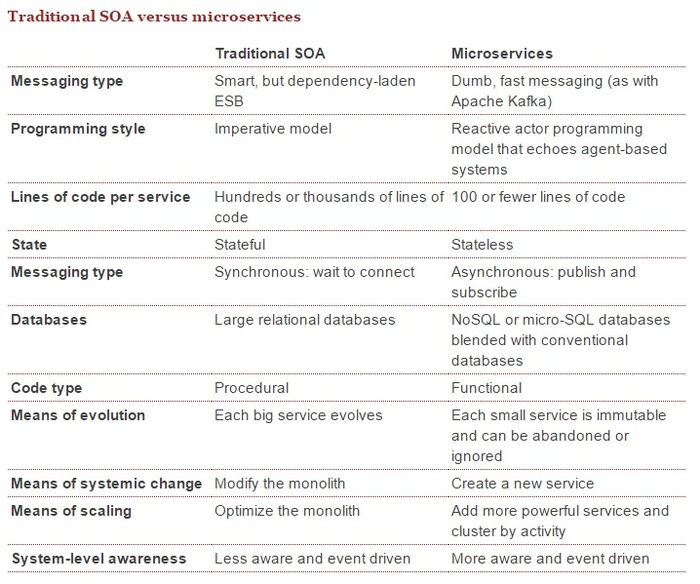 Microservice architectures are distinguished from service-oriented architectures in nearly every way. Source: PricewaterhouseCoopers

In the modern business world, "rapid" development simply isn't fast enough. The goal for app developers is continuous delivery of patches, updates, and enhancements. The discrete, self-contained, and loosely coupled nature of microservices allow them to be swapped out or ignored without affecting the performance of the application.

The March 25, 2014, microservices overview written by Martin Fowler and James Lewis provides perhaps the most in-depth examination of the technology. Even more important than the technical aspects of the microservices approach is the organizational changes the technology represents. In particular, development shifts from a project model, where the "team" hands off the end result and disbands, to a product model, where the people who build the app take ownership of it: "You build it, you run it."

The same development-maintenance integration is evident in the Morpheus database as a service, which allows you to provision, deploy, and host MySQL, MongoDB, Redis, and Elasticsearch databases using a single, simple console. The ability to spin up instances for elastic scalability based on the demands of a given momentm, whether growing rapidly or shrinking marginally, means that your instances will be far more productive and efficient. In addition to residing on high-performance solid-state drives, your databases are provisioned with free live replicas for fault tolerance and fail over. Visit the Morpheus site for to create a free account.