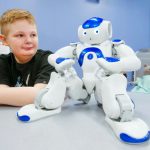 I’ve written several times about the growth in the use of robots in care home environments, with companies such as IBM and Softbank among the forerunners in this nascent field.

The latter have recently teamed up with Middlesex University London, and the University of Bedfordshire on a three-year project to evaluate the world’s first culturally aware robots for use in care homes.

The project, which has been jointly funded by the Japanese government and the EU as part of the Horizon 2020 research program will involve both a global consortium of researchers and also scientists from industry and the healthcare sector.

A key aspect of the work is to develop robots with a sense of cultural awareness.  The robot being developed is Softbank’s Pepper, which has already been utilized in a number of healthcare environments, and the team is particularly keen to explore the use of robots in elderly care environments, which are under extreme pressure from changing demographics.

“As people live longer health systems are put under increasing pressure. In the UK alone, 15,000 people are over 100 years of age and this figure will only increase. Assistive, intelligent robots for older people could relieve pressures in hospital and care homes as well as improving care delivery at home and promoting independent living for the elderly. It is not a question of replacing human support but enhancing and complementing existing care,” the researchers say.

Central to the effective deployment of robots in such environments is the ability for the machines to successfully adapt to the various cultural requirements of the individual patients.

“In order for robots to be more acceptable to older people, it is essential that they can be programmed to adapt to diverse backgrounds and this is where my expertise in Transcultural Nursing comes in. Care robots that are culturally aware are likely to meet with greater acceptance from both the older people and their carers,” the team adds.

The key will be to provide the robots with the capability to automatically detect, and then alter their interactions based upon the specific culture, customs and etiquette of the person they’re caring for.  The hope is that by doing so, they will be more likely to be accepted by clients.

The capabilities of the robot will include:

“Personal social robots are going to be the next big thing in the history of robotics technology. And SoftBank Robotics is committed is committed to creating an intelligent and embodied eco-system of living, where robots will coexist with us in harmony, for a smarter, healthier, safer and happier life. Our Pepper robot is already being used in thousands of homes and the Romeo humanoid robot aims to be a companion for everyday life for people needing assistance. We look forward to working with our partners on this project to develop culturally-aware robots that are suitable for supporting older people,” Softbank say.

Whilst healthcare seems a distinctly personal and human environment, there is much to suggest that patients do come to accept automated assistance.

A recent study found that senior citizens are quite happy to accept robots as helpers, but are much more concerned about ceding too much control to them.

“When interfaces are designed to be almost human-like in their autonomy, seniors may react to them with fear, skepticism, and other negative emotions,” the researchers say. “But, with those considerations in mind, there are actually several areas where older people would accept robot help.”

The patients revealed that they usually found the robots extremely useful in both a physical, informational and interactional sense.  They were particularly keen on the robots performing helpful tasks, with older patients keen on robots providing entertainment and information.

The consortium mentioned at the start of this post plan to test out the robots in the Advinia Healthcare care homes across the UK, and in HISUISUI care homes in Japan, in the final year of the project.

The Robotic Device That Can Draw and Analyze Blood

Who Will Win in the Robot 'Arms' Race?