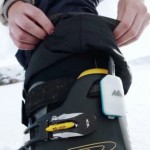 The last year has seen an increasing number of wearable devices that don’t just track our exercise but offer feedback on our form.

I’ve written previously about apps such as MoovNow, which offers smart coaching via its wristband technology, and the Loughborough University based Lumo Run clothing range that does a similar job via athletic clothing.

Or you have the recent partnership between IBM and Under Armour, with the Watson system built into the clothing sold by UA.

Most of these technologies have been for quite mainstream sports such as cycling, swimming and golf.  A team from Imperial have developed a device for skiers to track and monitor their performance.

Their device, which they’ve called Carv, aims to give the level of coaching and feedback that is typically only available to top level skiers.

Carv consists of an insert that is placed inside the boot and a tracking device that is clipped onto the body.  Carv then measures both the motion of the skier and the pressure distribution on the skies, providing the skier with real-time feedback through earphones.

This data is also sent wirelessly to a smartphone so that the data can be analyzed after the run, with information ranging from actionable feedback to detailed metrics.

The device is currently raising money on Kickstarter, where they also hope to develop an initial audience for the product.

“Kickstarter is an amazing platform that’s really opened up funding for products like this.” the founders say, “As we’ve launched it we’ve found this whole community of people engaging with us and evangelising about Carv. We’ve found there’s a big consumer following for it as well as the demand coaching community we expected.”

In addition to raising money on Kickstarter, they’re continuing to develop the app, with a pressure sensor currently under development that uses 48 sensors in each foot to accurately map the pressure and movement of the skier.

The fundraising is currently massively over-subscribed, with the $50,000 target comfortably exceeded in around a week.  The device will go on sale for $250, with extra functionality via the apps available for an annual subscription of $100.

You can find out more about Carv via the video below.