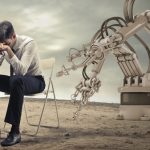 there have been a number of dire warnings in the past year about the number of jobs that are set to be automated in the next few decades.  some go as far as to suggest that 1 in 3 jobs will be done by computers within the next 20 years.

suffice to say, these kinds of proclamations seldom examine the number of new jobs that we might create and so inevitably take on a rather gloomy hue.  a recent study from massey university’s school of management explored just how worried workers in new zealand were of such automated unemployment.

are the robots coming?

indeed, the study found that over 87% of workers disagreed with the premise that a machine will one day be able to do their job better than they could.

“despite experts like bill gates and stephen hawking warning about mass unemployment in the future, it seems very few new zealanders are making any plans to change out of jobs that might disappear over the next five to ten years,” the researchers say.

“it was interesting that those who most strongly denied the possibility of a machine doing their job were often from the sectors most at risk, like checkout operators, drivers, and analysts. these are all areas where we can already see technology having an impact,” they continue.

so it’s less a case of the kiwi workers being confident in their abilities as it is perhaps an ignorance over the capabilities of machines to function in their area.  for instance, storeroom workers are quoted as saying that it won’t affect their careers, with an apparent ignorance of robots like tally already operating in stores around the world.

“it was bizarre reading some of the interview quotes, but i guess ignorance can be bliss,” the authors say. “people think their jobs are harder than they actually are. often jobs actually consist of a set of repetitive actions that can be codified and done by a robot. this applies to many jobs currently considered high skill, like accountants, lawyers, and researchers. there is report writing software now available that is practically flawless.”

one explanation might be in the demographic breakdown of the results, with older employees much more likely to have a bolshy attitude towards automation.  it’s quite possible that they reason that retirement will beckon before automation impacts their work.  indeed, younger workers in the survey were considerably more concerned about their prospects.

worryingly, however, this concern manifested itself in lower levels of both organizational commitment and satisfaction over their career, neither of which is likely to help them when the machines do come.

changes are inevitable, with few professions not at risk of some kind of automation in the coming years, but we will only manage this transition successfully if we approach it with our eyes wide open.  it will require society to have the kind of education necessary to allow workers to re-train easily and adaptable so that they can react to the changes in the labor market as quickly as possible.

whilst the nature of the changes remains uncertain, what appears to be guaranteed is that changes are coming, not least to the very notion of permanent jobs that give us stability in our lives.  sadly, whilst preparation for this shift would appear to be key to managing it, the study suggests that for many of us, we are anything but.

“there is going to be a huge displacement of people in the workplace and a large number of jobs may disappear. i don’t think we are prepared for it at any level, whether we are talking about education, employment or social equity and stability,” the researchers conclude.