What is API management?

It is an umbrella term covering the entire lifecycle and management of API’s. It composes of publishing an API, its governance by exposing it to either internal or external systems with a secure and scalable environment.

There are different vendor products available which makes API management easier for Organizations. Some of the popular suites are Layer 7, Apigee, Intel Mashery. Some organizations have gone in-house development to do API management as well. API management suites provide wide range of functionality in terms of enabling ease of interconnection with disparate systems, as well providing a secure exposure of API’s from inherently out-dated or even insecure systems. It also allows versioning of API, manages traffic, and allows throttling configurations as well.

The architecture below is a very simple representation of an API manager, in real time there could be hundreds of API providers and thousands or even millions of API consumers.

Why the current Generation of API management suites are not enough?

–  Optimal utilization of an API

What the Next Generation of API management suite needs

The current API management provide static configuration. Next generation of API management tools will have to do more and will need to integrate with APM (Application Performance Monitoring) tools, Big Data Analytics and build Elasticity into their very behavior. This will help in providing a more business centric and real time use case as well as better monetization of API’s. Such a capability will give huge advantage in the API management market. 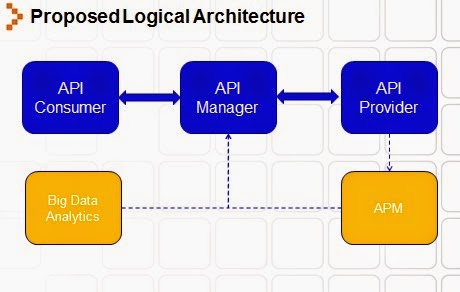 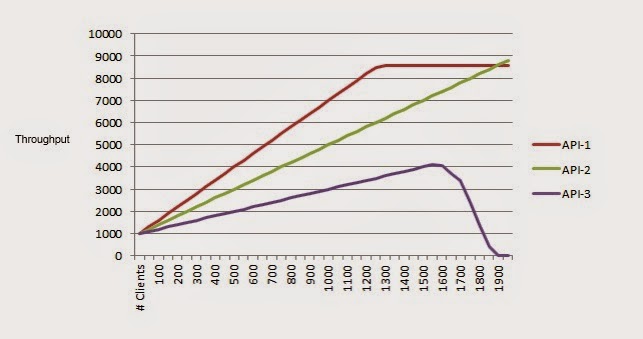 This is a reference thought-put chart


Optimal utilization instead of safe throttling rates
Current configuration of throttling rates for an API are static and pre-defined usually set to a safe throughput rate as per the performance characteristics of the API provider but considering that any business wants maximum ROI(Return on investment). It is best that the API are used to the optimal rates to generate maximum revenue. Given that, any API provider system would have a variable behavior sometimes increasing its throughput or in worst cases decreasing its throughput. This could be due to many factors like

Of course, each of these steps can be followed-up by reconfiguring the throttling rates but when you integrate the APM with the API manager, you are effectively getting better intelligence with respect to how much you can load the system. Suppose the API provider is exposing a paid API service, it is better to allow as many API request as possible so that we achieve optimum utilization of the API. This results in maximum revenue possible to the API provider, instead of lesser revenue due to static throttling rates.

In case when an API provider is hosted on a cloud, it would scale up and down as per the need but any organization subscribes a plan with a maximum number of virtual CPU’s limiting the maximum throughput and in those case its best for the organization that any API is used at optimal rates for maximum ROI.


Predictive and Real-time crash prevention
Let us go back to the Figure 1. In case of API-3 if the API manager adds any more clients beyond 1700, the API provider enters into a critical state and eventually crashes. In such scenarios based on throughput rates, API manager can predict an eventual crash and do dynamic throttling to prevent a crashing of the API provider system as long as the real time throughput follows the historical throughput rate, which leads to a crash. This is Predictive crash prevention. This can be achieved in current API platforms by setting maximum clients per API provider but we can move away from a static configuration to optimal utilization and build a capability of smartness and auto-configuration to API management platforms.

For Real-time crash prevention, in case of API-1 and API-2 wherein they do not show degenerative throughput, the API manager can keep on adding clients until 2000, but suppose there is an issue in the API-2 provider, caused due to a bad patch or a recent update causing instability in the API provider. Its real time throughput deviates from the historical throughput rates; the API manager can automatically detect this behavior as the real time throughput drops drastically. Here throttling can be dynamically adjusted to prevent the API provider from crashing adding real-time crash prevention feature.

This real time throttling feature can be used to increase clients as well when the API provider shows additional scaling capability when it shows better real time throughput as the number clients reaches the previous maximum rates.

Predictive throttling configuration
The admin of the API manager can arrive at an optimal throttling configuration based on user or time but there could be easily be cases where over-provisioning can happen. For example, though the source API can only support 2000 client systems with a throughput of 200 requests/sec. During the configuration, an administrator thorough an erroneous calculation arrives at a throughput of 500 requests/sec and configures the rate. Such a configuration would cause a crash in the API provider, as the system may not be able to scale to that many clients. If the API manager already has the analytics though which it knows that the configuration is an over-provisioning it can alert the administrator that the configuration is over-shooting the API providers maximum capability. Such intelligence can also provide the optimal thrilling rates for a given API provider. This feature would equip the administrators and the business users to manage the API’s better with much ease.

Credits
Thanks to Damodaran who helped me in getting information for this article.
–  Ramachandran, Damodaran (Syntel, Ltd)