User interface layout has been one of the main challenges that has held web applications back (desktop integration is another one). Especially vertical arrangements such as the following used to be next to impossible: Bars at the top and at the bottom contain widgets that take up minimal height, while the content is displayed at the center and takes up the remaining vertical space. Note that this is trivial to do in desktop GUI frameworks such as Java Swing. Recently, Ajax frameworks have made progress in this regard. Now you can implement the above mentioned scenario, but you have to specify fixed heights for the bars (the screen shot shows this kind of bar at the top of the window and above the email message). A small price to pay, especially as those frameworks do it in pure CSS (=fast). 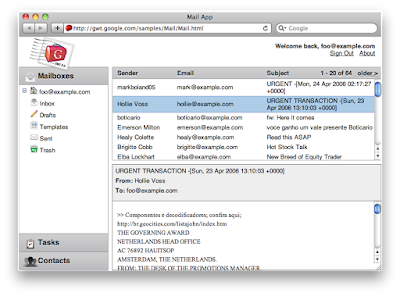 I am aware of three frameworks that perform this kind of magic:

So this makes full-featured web GUIs possible today. Regarding the future, I’ve written a blog post about what CSS might be capable of, one day.
Web application