As you may know, we’re pretty big fans of NodeJS here at Raygun – we run it in production and love talking about it!

With the recent release of NodeJS 6.0, we decided to take a nosey and see how it performs compared to older versions of Node. As before, we’ve followed the same pattern–Ubuntu VM running AB pushing a large number of requests (100 concurrent connections) into the Raygun API to see how many requests per second it copes with–usual disclaimers apply–these numbers relate only to this one blog post, they don’t aim to be a complete overview of how well NodeJS performs.

This test only stress tests a very small portion of what can be tested.

Let’s Look at Some Numbers!

You’re quite right–but, and this is perhaps the most important part, this code was built again 0.10.* and has been optimized for it.

What Happens Then if We Compare a Basic Express App That I Just Created? 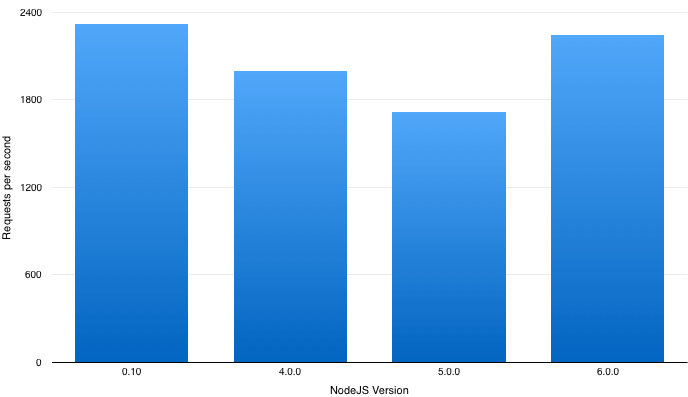 The slight slowdown that has been witnessed in Node over the last few versions is gone–we’re back to where we were, in terms of Express speed anyway.

NodeJS 6.0.0’s huge focus was on speed and it shows–it’s jumped up way past 5.0 in my basic testing–always nice to see any improvements that can mean real-world savings in hardware costs!