from a performance perspective as well as a developer productivity perspective, mongodb really shines when you only need to load one document to display a particular page. a traditional hard drive only needs one sequential read to load a single mongodb document, which limits your performance overhead. in addition, much like how nas says life is simple because all he needs is one mic , grouping all the data for a single page into one document makes understanding and debugging the page much simpler.

a place where the one document per page heuristic is particularly relevant is on pages that display historical data. loading a single user object is fast and simple, but running an aggregation to compute the average number of times per month a user performed a certain action over the last 6 months is a costly operation that you don’t necessarily want to do on-demand. nodejs devs are spoiled in this regard, because scheduling in nodejs is extremely simple. you can easily schedule these aggregations to run once per day and avoid the performance overhead of running the aggregation every time a user hits the particular page.

getting transformed data $out of aggregation

let’s take a look at how this can be used in practice in nodejs. recall the food journal app from the first part of this series : let’s add a route that will display the user’s average calories per day broken down on a per-week basis. this involves a slow and complex aggregation, so we’ll schedule this aggregation to run once per day and dump its data to a new collection using $out . the data for this route will get recomputed for all users using one aggregation, and each time the user hits the api endpoint all the server will do is read one document. here’s what the aggregation looks like in nodejs (you can also copy/paste this aggregation pipeline into a mongo shell and get the same result). you can also find this code on github .

taking a look at the results

using a bit of nodejs magic, we can wrap this aggregation in a service that uses node-cron to schedule itself to run once per day at 0030 (12:30 am) server time: 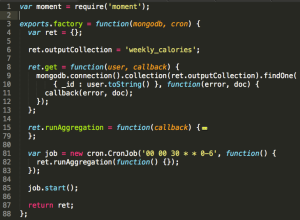 we can then inject this service into an expressjs route and expose the route as a get /api/weekly json api endpoint:

a little extra work ( git diff ) to put together a ui that displays the data from get /api/weekly gives a very satisfying result:

mongodb 2.6’s improvements to the aggregation framework are a quantum leap forward, and enable you to do some amazing things. while scheduled analytics calculations certainly aren’t the only use case of $out , i hope this post showed you at least one way in which $out allows you to play to mongodb’s strengths in a new way.

this is part ii of a 3-part series on using new mongodb 2.6 features in nodejs. part iii of this series is coming up in 2 weeks, in which i’ll take a look at some of mongodb 2.6’s query framework improvements, primarily index filters.