Creating the right toolkit of languages, frameworks, libraries, and databases is the first step towards executing a successful project. While understanding each tool’s pros and cons is a logical route to perform this comparative analysis, frontend and backend development teams can benefit more if they understand the context which dictates the ideal tools.

Hence, while assembling your toolbox for developing your next project, it is essential to understand the fundamental requirements of server-side development. Here is a primer to bring you up to speed. 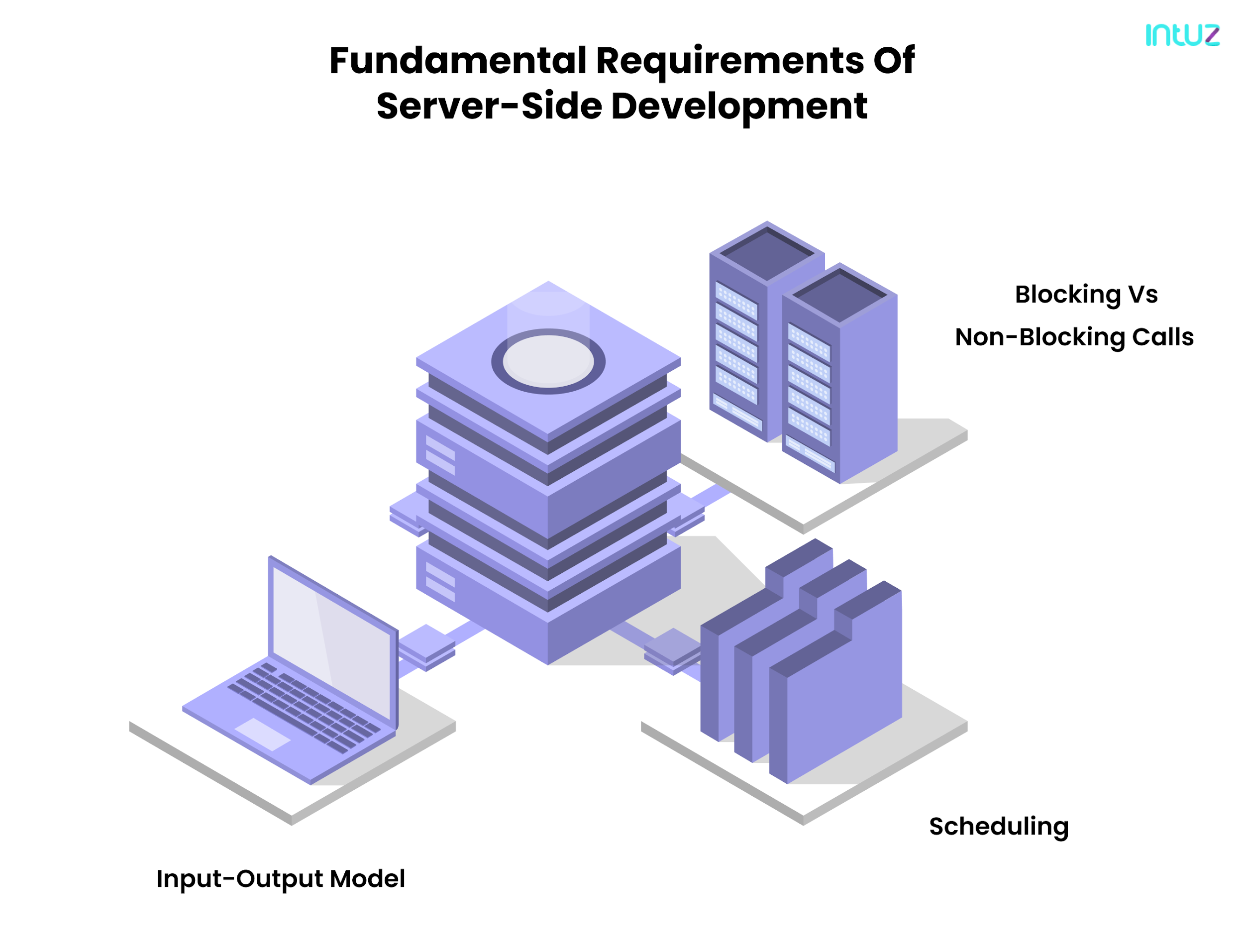 I. Fundamental Requirements of Server-Side Development

Irrespective of what language, frameworks, and libraries you use for development, the basic flow more or less remains the same. You work with a system call, popularly called a "syscall" that consistently interacts with the kernel.

The syscall is responsible for providing requests to the kernel, which executes them at the device level. This arrangement ensures that all the device-specific computing is done at the kernel level, and your application does not have to deal with excess computing load.

Syscalls are generally determined to be blocking calls. "Blocking" refers to when the kernel waits for returning a result or a piece of information. For instance, the kernel may wait for the device to be ready for computing or wait to access certain device data, etc. Such challenges lead to a blocking call which means that your instruction is not executed for a few milliseconds.

Non-blocking calls are more complex to engineer but can save critical compute resources. For such arrangements, you command the kernel to alert you when the necessary data is available, and meanwhile, put your request in a queue. Other functions that can be executed immediately are executed instantaneously.

If you are building a comprehensive product, at some point, your number of threads and processes will reach a critical mass where you will have to supply more deliberation to scheduling. In the simplest terms, scheduling is the step where a context switch enables the execution of one thread after another or one process after another.

If you have too many blocking calls, the time taken for switching aggregated across thousands of threads and processes can become a significant issue. This is the reason why non-blocking calls are used for ensuring asynchronous processing, wherever possible.

Node.js and PHP are often considered two of the most prominent languages ideal for server-side software development. This section will give you an efficient walkthrough to understand the profile of both Node.js and PHP.

Node.js was developed by Ryan Dahl and released in May 2009. It is an open-source runtime environment which makes it cost-effective from the outset. It supports asynchronous development, which means it leverages non-blocking syscalls to make the development process resourceful. One of the most significant advantages of using Node.js is that since it uses only JavaScript, your entire project can use one language throughout the development timeline. The runtime also comes with several Node.js frameworks designed to add functionalities.

PHP stands for Hypertext Preprocessor. It was released in 1994 by Rasmus Lerdorf. While it is an older language compared to Node.js, PHP can be used for server-side development and other development processes throughout the project. It is less constraining in terms of the underlying languages it supports since it can work with JavaScript, HTML, CSS, and plain text.

One should evaluate the popularity of both the alternatives to understand:

This information can be used as an input to decide which might be the preferable alternative between Node.js and PHP for web development companies.

III. Understanding the Contrast Between Node.js and PHP for Server-Side Development

To better frame the analysis between Node.js and PHP, one should look at specific criteria like concurrency, scalability, and performance. Both Node.js and PHP are easy to install and come with their frameworks or package management systems. Hence comparing the installation process is not of paramount importance here.

Concurrency shows the efficacy of server-side languages or runtimes to execute multiple threads and processes efficiently. PHP is a synchronous language and uses I/O block calls. While some plug-ins and tools dependent on PHP have asynchronous execution, they are few and far between. While PHP libraries have been optimized for faster performance and lesser compute resource consumption, one has to admit that they will be relatively slower since they are synchronous.

Node.js is an asynchronous environment. This means that the queries are resolved as the syscalls reach the kernels. All the calls that will require more data, file, or system access get queued and executed later, without standing in the way of other functions that can be completed. This is a simplistic explanation of asynchronous environments, but it still accurately states the core meaning of the phenomenon.

Scalability shows how seamlessly server-side scripting language or runtime environment can be scaled across multiple systems, cores, and servers as the project grows both in the number of functionalities and data as well as the users. 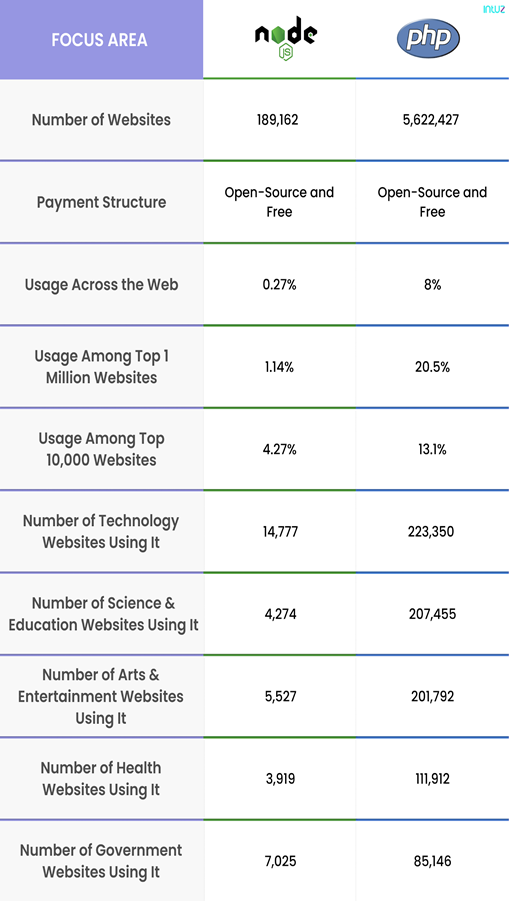 Most major content management systems like WordPress and Joomla support PHP. This makes the scaling process relatively more straightforward. Node.js, on the other hand, requires relatively more effort for scaling it across systems.

It might seem obvious that Node.js is a better performing runtime environment as it is asynchronous, but ReactPHP has made it possible to fill the performance gap between PHP and Node.js.

On an empirical basis, PHP can execute only 50% of the queries per second compared to Node.js.

If your project requires speed or real-time data flow, Node.js would be the preferable option between the two server-side languages. Node.js can also be an excellent alternative for teams that want to use JavaScript across the stack.

Node.js development companies might prefer the runtime environment, while those proficient in PHP will prefer the server-side scripting language. Using more objectivity, it can be seen that the ideal language or runtime environment for the project will depend on the purpose and constraints of the project. There are major companies on both sides — Facebook, Wikipedia, Slack, MailChimp, and WordPress use PHP, while Netflix, LinkedIn, PayPal, and NASA use Node.js.

Thus, instead of comparing which server-side JavaScript language is good in general, you should try to examine which of the two alternatives is suitable for your specific project, its goals, and its constraints.