i wanted to buy a nokia lumia 800 for a while now, but since i wanted to buy it for daniela i wanted to buy the pink magenta version, and i couldn’t find it neither in italy nor in belgium. since i’m now in bellevue for the mvp summit, i decided to take advantage of a promotion done by microsoft store and buy the lumia 800 bundle, which includes the lumia 800, the purity monster headphones, the play 360 speaker and the luna bluetooth headset, all for 899usd + taxes (984usd in wa) which is 730€. if you consider the cost of the single pieces, it’s almost 200€ less that what it would cost to buy it in europe. 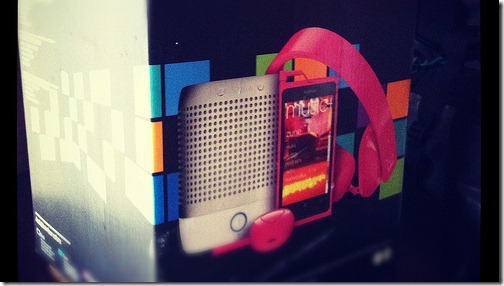 since i’m flying back to belgium i had to get rid of the big packaging. i have to say that i’m really impressed by the quality of the package, same quality, if not better quality than apple packaging: pull loops, magnetic covers and similar goodies.

as i did last year when i bought the samsung omnia 7 , here are the unboxing pictures. hope you’ll enjoy watching the unboxing as much as i enjoyed doing it.

i haven’t started using it yet, but i just made sure everything was working properly before flying back to belgium.

i expected it to be a bit bigger, while it’s smaller than the samsung and similar in size to the iphone 4. but there is less “chrome” around, so at the end probably the viewable area is the same. i didn’t activate it, but i played a bit with nokia drive and even downloaded the map for british columbia as next week i’m spending some days driving around the area.

bluetooth headset, of course pink as the phone: haven’t tried, but the concept looks nice. you go around with that kind of ball in your pocket, and when the phone rings you just pop the headset out of the cradle. looks like a good compromise between battery life and size. the pairing process was pretty unique too: i popped the headset out and it started to talk, giving instructions on how to pair it. and i paired it with my iphone, and it worked fine even with that.

still pink, they come with a carrying case and two cables: one that is specific to older nokia phones, and one that is called controltalk universal, that allows you to pickup, hang up, play, pause and volume. and works also with the iphone.

also this one works with the iphone  and any other bluetooth audio player. the pairing process was pretty simple too, and would have been even simpler with a nfc device: touch to pair. the speaker is wireless (battery should last 20hr of music) and comes with nice neoprene carrying case.

finally everything is recharged via mini usb, so even if each product has its own cable and power adapter, you need to bring just one around.

when i get back home and get a micro-sim card i’ll see how the phone works. there should not be us specific version of the lumia800, so hopefully it will get a good 3g+ signal in europe. and will post more impressions when i come back.