Istanbul is the most beautiful city in the world to me. Aside from its history and unique Bosphorus, Istanbul is also a very valuable place for developers in Turkey because there are many events around software and developers. One of these very valuable events I attended this year was Java Day Istanbul. In this post, I'm going to talk to you a bit about this event and my thoughts.

I stayed on track 2 (Marmara 2), except for the last talk.

We implemented some of these principles from a microservices architecture in a recent project at the company where I worked. As developers, we have full control over the test environment (the other two environments being uat/prod). After some problems and the number of services we had, I saw the need for having a dashboard that tells us what is going on. I started with a simple status dashboard, and with the help of my colleagues, we created some additional features. It was a start and a primitive project. So, I was interested in the Monitoring at Peak talk to see how can be done in real life. It was nice to hear their experience, as well as validation that I need to take time and dig into Prometheus. Another important point from this talk was that it was the first time I heard about postmortem. Now, I see that it was not a surprise to hear the same word in A Hitchhiker’s Guide to Serverless Computing while he was talking about SRE. 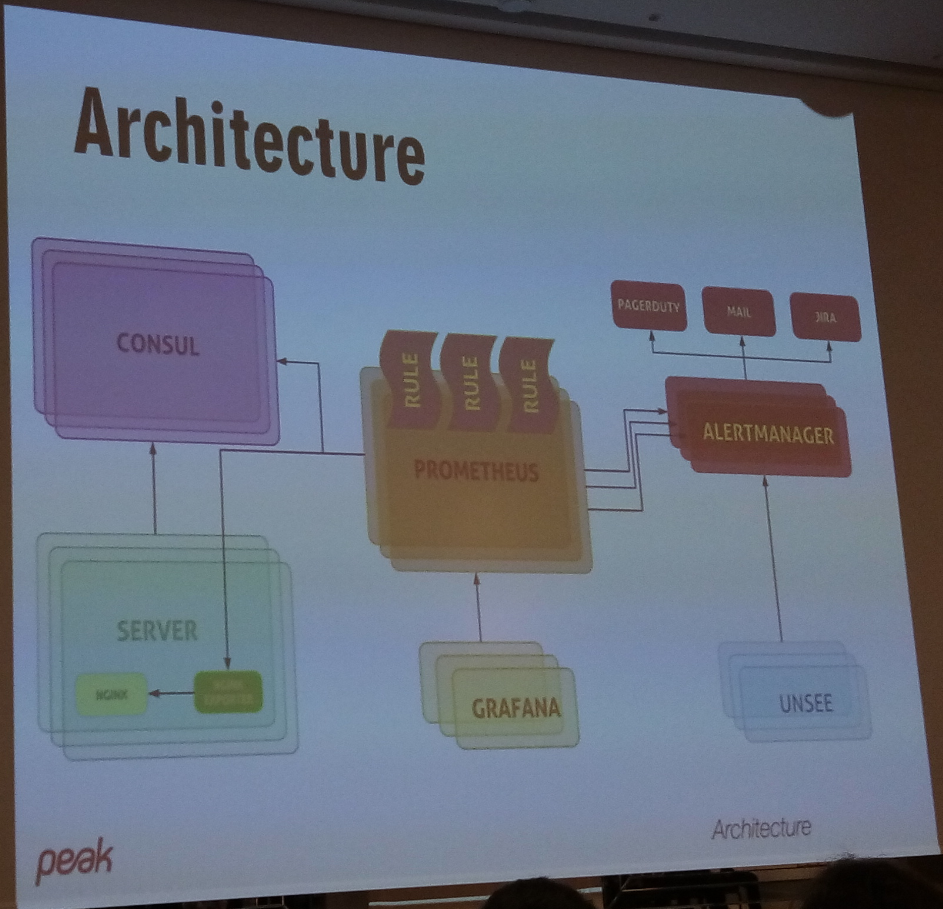 The next talk was Coroutines for Java Developers. I had heard about coroutines in Kotlin a few times. This whole topic revolved around multithreading, parallelism, and asynchronous, reactive programming, as this has many similarities with my experiences in Trigonometry in high school.

Another talk was from @yalcinyenigun on Scaling Payments in Black Friday 2018 (links to blog post). I picked this talked because I follow @iyzicoEng. They seem to have a colorful team and environment. Learning a bit more on scaling is never a waste of time either. Again, my experience with scaling is much like the above-mentioned topic (not to be surprised, one is the solution to another). It has not been a problem for me yet (not because I solved that problem, or do not care about the problem, but I have not had such a high traffic-or-resource-attracting project).

It was my favorite talk at the conference.

Ten Common Mistakes Made in Functional Java by @BrainVerm was a refreshing and resting talk. We used Java 8 in a recent project at work. I was sad that I witnessed many of the mentioned problems, but at the same time, I was happy that we implemented similar solutions to overcome them.

It would have been such a disappointment if I had not attended one of the serverless talks. So, I attended A Hitchhiker’s Guide to Serverless Computing by @alexismp. While using the term "serverless," there is actually a hidden server :). I like the pic-a-daily app he demonstrated. It's pretty simple — you upload a picture, and then, the vision API extracts information from the picture and adds tags to them. SRE was the main thing that I got from this talk. You can see other resources and two free books mentioned on the website. He put the SRE as follows:

The last talk was in Marmara 1 on A Deep Dive Into Progressive Web Apps by@cagataycivici. This talk had two important bits: The first one was on the technical failure of devices. For this particular presentation, the slides were sometimes visible but would then disappear throughout the presentation (this was such a shame for the event coordinators).

But that did not ruin the talk though. The speaker was calm and cool, even when trying to fix it. I admired his attitude; he had fun with it and we were all laughing by the end. The second part was on a topic that I did not know much about — PWA. There was a long period of time where I stopped developing Android mobile apps, but people are not happy when a web application is not mobile-friendly. They always request applications for their devices. Recently, I was experimenting with React-Native for Todarch. When you are a single person working on a project, it is too much of a divided effort, both in terms of development, deployment, database, cli, web-ui, and react-native. Finally, I decided to continue with just a web application. This talk proved that I did not give up on too much, and gave meaning to those extra bits in my create-react-app project. To be honest, I was just deleting those manifest.json, serviceWorker, etc.). If I pay attention to some of the principles, the web application could be used as a mobile application or even a desktop application. Because of this, I will take more time to learn and experiment with PWA.

I won a t-shirt from taking a JetBrains quiz and then got another with Java Day Istanbul from the organization. So now, I have two nice t-shirts.

Our manager got a coupon (for asking a high-voted question) for a free book. We used it to get a basic computer science book in hopes to refresh ourselves with the fundamentals during breaks at work.

And finally, this is a picture of what I brought home — apart from the technical knowledge and enhanced awareness. 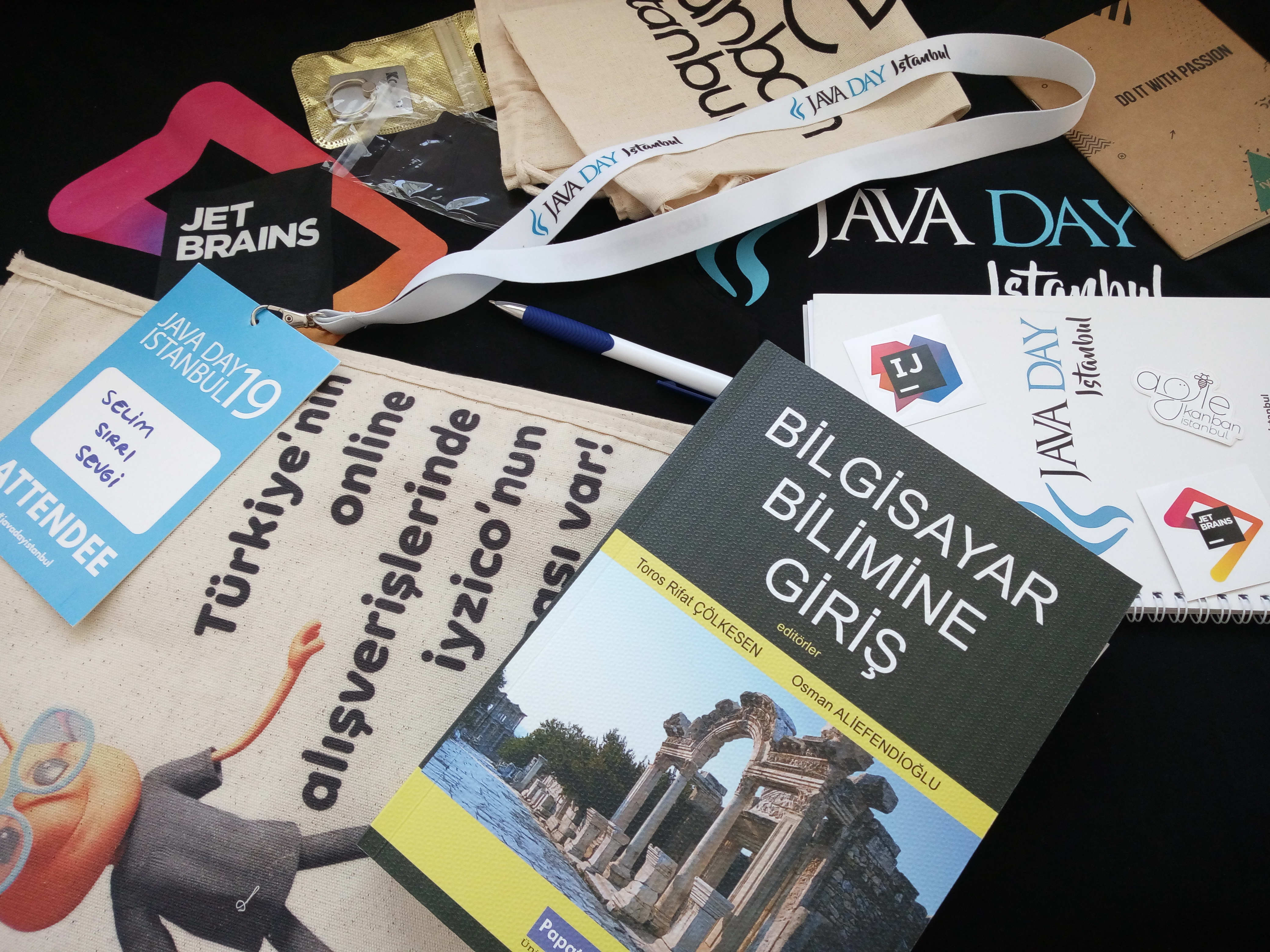 First off, the location was easily accessible, and fancy. As you could see from my comments, the content was satisfying (at least the ones I attended). And the food (breakfast, lunch, and other stuff) was great. My belly was satisfied as much as my brain. The companies in the hall had enough content to have fun and stay busy.

Additionally, the SliConf application was used during the sessions as a way to ask the audience questions. This is, of course, was just one of the functionalities of the application. Even though the application is not so easy to use, the part for questioning served its purpose. People did not have to catch microphones, and the questions with high-points (+1 by other attendees) were answered by the speaker at the end of the session. In my opinion, that fixes some of the problems with the traditional concept, like:

Published at DZone with permission of Selim Sevgi. See the original article here.